In the 1990's, Ted Wildy of New Zealand created an index of marriage witnesses, which had contributions of the names of the witnesses of many marriages in the UK (as well as Australia and New Zealand).

After his death in 1997, much of it was lost. Early fragments of it exist, and a UK site said they were going to put a later version online in 2009, but I don't think anything came of that.

So, this is a two part question. Does the final Ted Wildy UK marriage witness index exist online in any form? It was a lot of data for the time, a tiny amount for now, but it would still be nice to see it live on.

Secondly, and more importantly, is anybody doing anything similar now with the much larger amount of data currently available? For example, parish records for selected counties in England are now on Ancestry and FindMyPast. There could be a project to transcribe the marriage witnesses. Does any such project exist? Any other index based on perhaps FreeReg, or from GRO certificates?

Marriage witnesses can be very useful to help identify the bride or the groom, as they are often connected to them in some way, such as being a brother or sister, or come from the same small village. With an index, it's possible to find more "known associates" of a named person as they become a witness for relatives or workmates, and build a more complete picture of their life.

FreeREG does transcribe witness names where they are given in the register, and searching on FreeREG will search the witness names as well as the names of the bride and groom, and of the parents where given.

It's likely that the rewrite of the FreeREG web site which is currently under way will include the ability to specify which types of names you are interested in when searching the index.

Judy Webster (Twiter handle @JudyQld) found a page about the status of Wildy's Marriage index in the FAQ of soc.genealogy.britain:

The UK portion at least was entrusted to Faye Guthrie, and she has kindly provided us with the original data, so that we can serve them from this web site in the near future.

The Australian MWI, it is claimed here, appears to have been maintained by Ada Ackerley. The contents, circa 1990, are available at http://home.vicnet.net.au/~agweb/aus-wit4.txt, but more recent updates have not been integrated. A portion of the Australian MWI featuring Victoria is available in searchable form at http://www.rootsweb.ancestry.com/~ausvic/mwi.htm

Hugh Winters maintains the New Zealand MWI. If you're looking at that page, beware that the first link, titled "You Can Search The Index", is broken, returning an "Incorrect database name" error. Later in the same page, there are links for adding to the database and searching the database (both copied here, for your convenience, and these seem to work. (see note below)

Now that we have Faye Guthrie's copy of Ted Wildy's data, we are working on developing a searchable database of the MWI data for this site. Watch this space!

Note: The links in the FAQ for Hugh Winters' site are broken so I did not copy them over from the FAQ.

There is a MARRIAGE WITNESSES DATABASE page at Genealogy Buff which says:

The UK Index, started in July 1988, at the time of this indexing had over 30,000 entries. Each entry includes the names of Witnesses, Groom & Bride, together with the date and place of the marriage and the name and address of the genealogist who researched that marriage and submitted the data for the Index. There are separate indexes for NZ and Australian Marriage witness.

I don't know if this is a new form of Wildy's data or a separate index. Wildy died in 1997, according to the FAQ.

The Cornwall OPC marriage search includes the ability to search by witnesses: 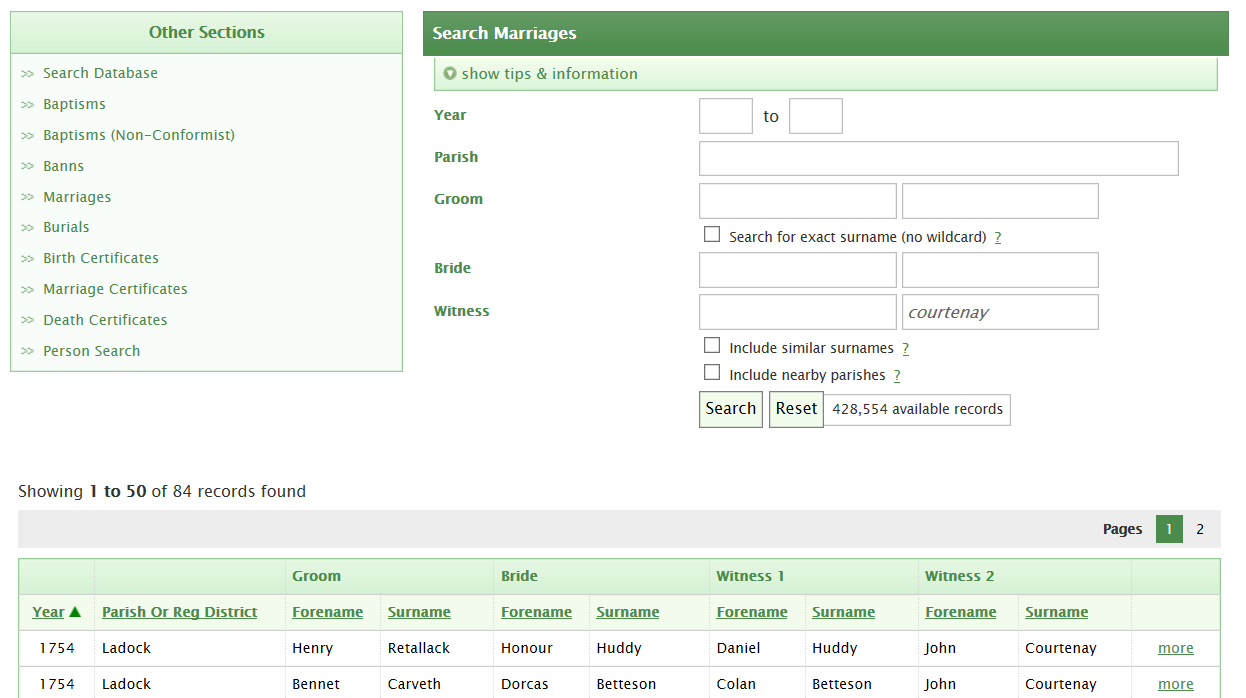