How do I read this descendants tree?

I have, using Ancestry.co.uk found a link in my distant heritage to the Prettyjohn (variations: Prettejohn, Petitjohn) family originally located in Devon.

One great source of information on this family, leading all the way back to the 16th Century, is this website:

My only problem is I can't understand the way that the tree is formatted at all.

Is this a fairly standard form of documentation?

I have tried to contact the website owner via the email link on the page, but have heard nothing back in over a month. Can anyone decipher it and explain it to me (bearing in mind I am still fairly new to family history)?

Below is a snippet from the site/page referenced in the question. The report is often called an outline descendant report. Each descending generation is indented and numbered, giving it the general character of an outline.

Others have provided good overviews of the information the report provides, some explanations have been included in the graphic above.

Because they often contain almost too many names to count, lengthy reports, such as the example, were popular "cousin bait" in the late 1990s; they may still be popular in some circles.

I once bought a book of supposed early Pennsylvania Miller genealogies. I had hoped to really learn something. When the package arrived, it was little more than hundreds and hundreds of pages of these outline descendant reports. A lot of the entries were just names and generation numbers. From the lot, I mostly learned that Miller families seemed to favor the names John and William. :-)

Below is an example of a similar report generated by FamilyTreeMaker 2010 for Mac. You'll note a different approach to the style. 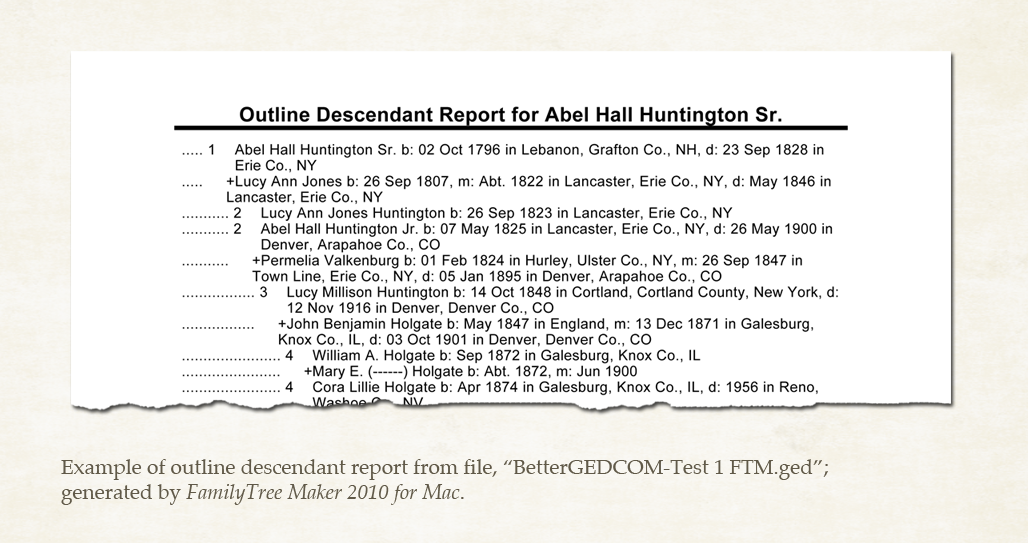 RootsWeb's WorldConnect generates an outline descendant report from its files on command (to a maximum of 10 generations). They call it a "Descendancy report." See, "Ancestor and Descendant Reports."

The numbers close to the beginning of each line are generations counting down from John Prettejohn at the top. So, John Prettjohn has a wife (shown by +) whose name is unknown and 2 sons William b 1557 and John (follow the outermost vertical line down to find him).

Under William is his wife +Elizabeth and their descendants, and so on.

The format is quite often used to represent an individual's descendants in text form, but I'm blanking on what it is called --descendants report, maybe.

I have taken the sources and tried to clean it up a little, removed the HTML formatting, and am presenting it in a fixed-width font to make it easier to read. I have also begun editing the wrapping so each line is one and only one person's information. As others have already stated, in general the + sign indicates a spouse, the --X- marker denotes "X generations away from John Prettejohn", and the | can be used to trace descendants from one generation to the next.

As Gene mentioned, accuracy of this information should be corroborated heavily.

It looks like this family tree uses a combination of indentation and generation numbering to describe the relationships. Each number preceding a person refers to the generation relative to the starting person. Thus children of John Prettejohn (generation 1) are William (from whom most of the tree is descended) and John. John is way at the bottom of the page. Spouses are not numbered. Dates of birth, death, and marriage are listed with each person, presuambly when they are known.

One thing to be careful about with trees like this is accuracy. Since no source information is given for any of the stated facts, you cannot be sure that they are historically accurate. Also, it is possible that there are obvious errors such as children being too old or too young for their parents, info being repeated, etc. I am not saying any of this is necessarily the case; it's just something to look out for.

Not the answer you're looking for? Browse other questions tagged family-tree or ask your own question.

5
Information on how to create a text descendancy chart

26
One tree, or a bunch?
0
What is the name of a “role” in a family tree?
4
Interpreting the Trussell Family Tree
2
How can I draw a family tree for blended / adoptive families?
4
What type of chart is this?
3
Family Tree as table in excel or similar format
7
How to display sperm/egg donors or surrogates on a family tree?
8
Updating Surname Chart of Male-Line descendants in form of tree?
1
Tracing family tree if grandparents moved to UK from Pakistan?