Abraham Decker was born on 12 Sep 1839 in Gauersheim, in the Pfalz region of Bavaria. He emigrated to the United States in 1859. (Although he was born in the Pfalz and not in Hesse which is shown as his origin on the ship's manifest, the two are quite close by.)

On March 29, 1874, in Philadelphia, PA, Abraham Deckert married Bessie Cohn, as can be seen from this record from Congregation Rodeph Shalom found on Ancestry.com.

My guess is that these names are actually misspelled, and that the bride and groom were Bessie Cohen and Abraham Decker, for the following reasons: 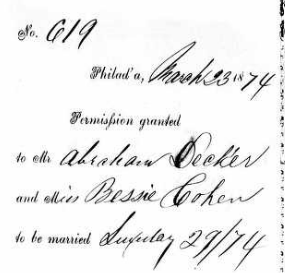 In the 1900 and 1910 censuses, Bessie is listed as a widow. The problem is that I cannot find the death record for her husband Abraham Decker. I've searched on Ancestry.com and on familysearch.org for various spellings of Decker and Abraham, and found nothing plausible.

The city directory for Chicago was not much help in localizing Abraham's death. There was an Abraham Decker listed in the 1870s and 1880s, but he was a shoe maker, whereas the 1880 census lists my Abraham Decker as a huckster. In 1887 there was an Abraham M Decker in Chicago who was a commission merchant, which is more plausible, but not close enough. In 1891, there are two Abraham Deckers listed: Abraham M Decker (real estate) and Abraham Decker (no occupation given). The second one is not likely to be the right guy: he is, in fact likely to be his first cousin, based on the address and which other Deckers are at the same address that year.

So when did he die? Where should I be looking next?

I recommend you conduct cemetery research in the hope it leads you to more information about Bessie (Cohen/Cohn) Decker.* Likewise, I would either continue or extend that same work to learn about the death and burial of the women "Barbara Cohn [/Cohen]" reported in the 1880 census that you posted (she seems someone's mother).

Might this cemetery be aka New Light at Cook County, Ill. Graveyards.com provides some rather nice information about the latter, reporting it is located at Lincolnwood. From the site

New Light Cemetery is a small, well-maintained Jewish cemetery in Lincolnwood, Illinois. It was founded in 1895 ... [t]oday, it lies entirely north of Pratt Avenue, east of NE Prairie Road.

I was unable to find a full listing of internments for the cemetery. A few burials are posted on FindAGrave.

Jewishgen.org has a site, "Guide to Jewish Genealogy in Chicagoland." I'm not as familiar with the resource mentioned there, but it seemed this might be one resource that you could turn to for church records and more.

Others may have a specific source on this, but if the research about Bessie and/or Barbara's deaths does not lead you to more information about Abraham's demise, I recommend you also check court record indexes to learn if a divorce action was filed about Bessie and Abraham. (I have a case in my family where the the former wife listed herself as a widow long before her former husband had died. Only in the last 10 years did we learn the man had married again and long survived.)

As part of this work, I recommend you pull the official death record about Bessie in the hope other information is there recorded (or at least more clearly presented). I suspect her death certificate will report the name a mortuary.

P.S. I struck out searching on GenealogyBank for a historical obituary about Bessie and/or Abraham Decker. Likewise, for Barbara Cohen/Cohn.

Bessie's obituary. I commented below about my own mixed results using the index on Ancestry.com for the Chicago Tribune. The item below did not return on a search for "Decker" in December 1929/Chicago Daily Tribune. As a test, I searched for another obit that I knew had been published in the Tribune on December 5, 1929; it also didn't return. I was able to use the index to browse the Tribune's obituary column, however; that is how I located Bessie's entry.

Interesting to see that Bessie was a member of two organizations (inc. New Lights Society). Also wonder if the chapel mentioned can be learned or had records. Death certificate Obituary might report the name of a mortuary. Note that the obituary makes no reference to Abraham Decker.

Although I did not use these resources, below are a few other links/references. Generally, these span a wider (or different) time frame. Most are self explanitory.

Not the answer you're looking for? Browse other questions tagged vital-records bavaria or ask your own question.

7
New York City vital records collections
11
Seemingly missing NYC birth records
10
Where can I search for elusive vital records (birth, names of parents, death) for my great grandmother, Celina Drollet?
12
How old *are* these people?
6
Provenance of Cook County death indexes
2
Finding a birth record for Samuel McReynolds?
11
How can I distinguish between name changes and missing records?
4
Was Daniel Rich (Jr.?) the grandson of Jacob Rich? Or, the confusing case of Daniel Rich (Sr.?) and Nancy Marshall