Old German script. What is the wife's name in this 1837 baptismal ledger from Stark County, Ohio?

The partial image below is from an 1837 baptismal register of a church located in Paris Township, Stark County, Ohio. It is written in old German script. At least to our knowledge, these ledgers have never been translated/transcribed as a body of work. 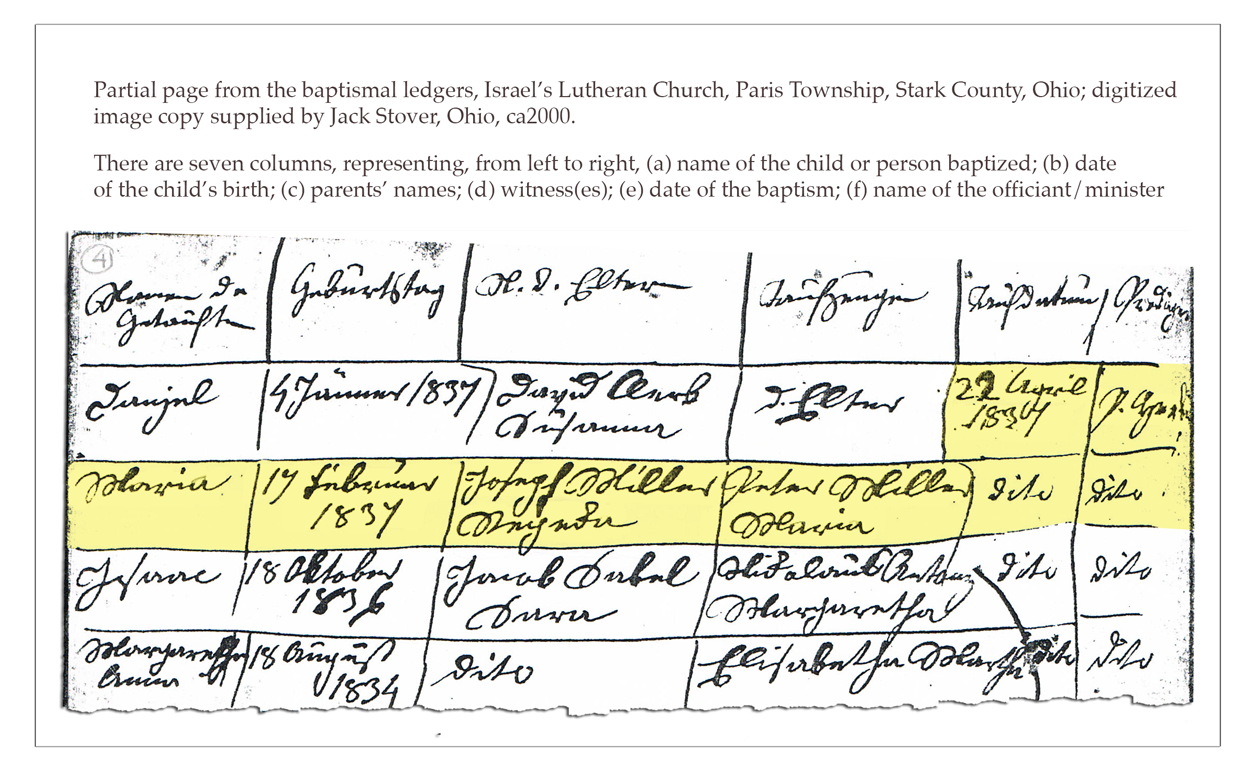 The wife's name has been hard to interpret/translate/transcribe. Here is a larger version of her name:

Based on the work of others, the name is thought to begin with the letters Re- and to end with an -a. Although the graphic represents four missing letters (in the middle), we can't be sure of how many letters make up that part of the name. 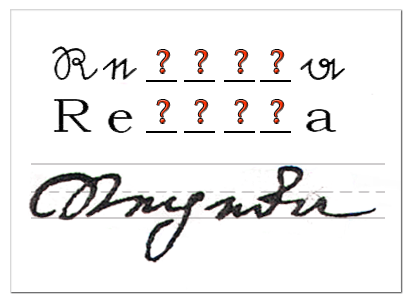 A few of the references I have worked with about German script are below.

I descend of Peter Miller (ca1779-1845), whose second wife was Mary Stewart (ca1786-1855). They settled at Paris Township, Stark County, Ohio. Separately, Peter Miller was a member of the church at Paris, and he and Mary are both buried in the church cemetery. Their first born was a Joseph Miller (b. 1814).

Although we don't know of any other Peter and Mary Miller contemporaries of Paris, there were many Joseph Millers of the day about the township, county and state. Both of "Paris township," one Joseph Miller married at Stark County in 1835 to Rebecka Thoma. (The Thoma farm neighbored Peter Miller's Paris farm.) This Joseph and Rebecka's first child is generally given as William Miller (19 Jan 1839 - 22 Sept 1918).

Rather early, a descendant of this Joseph and Rebecca/Rebecka in Ohio (Jack Stover) worked with the church ledgers. He came away with an interpretation for the wife's name in this entry as "R-e-g-i-n-a."

Jack consulted about the ledger with Dr. Daniel Jay Grimminger, Obl.O.S.B., Ph.D., author of Images of America: Paris and former Israel Lutheran church historian. Dr. Grimminger's insight assisted much with other parts of the entry, but he couldn't improve on the wife's name.

I wasn't able to interpret "R-e-g-i-n-a," or any obvious "whole" name from the record. (The members of Genealogy.SE are doing much better.)

Albeit probably biased by other logic applied to prove or disprove that Joseph Miller (m. Rebecca Thoma) was one and the same, Peter Miller's son Joseph, my humble attempt produced "R-e-[_]-e-c-k-a." 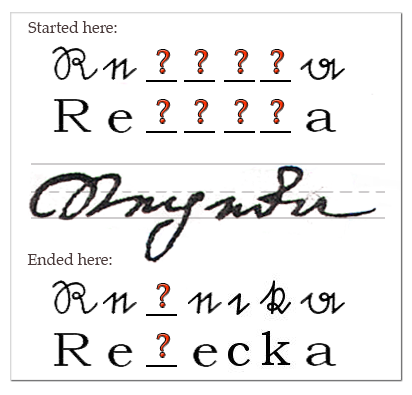 Looks like Regenta to me, but it's a very rare name. More likely it is Regetta and is misspelled as Regeta, or with some unknown character denoting a double "t". We know that the "t" is not supposed to be looped, but this guy's writing is loopy, and even I loop my T's sometimes.

I'd look for German female names that follow this sort of pattern...
Regella
Regeta
Regata
Regnata

The name "Regel" is a form of Rachel: http://www.baby-vornamen.de/Maedchen/R/Re/Regel/#Kommentare

I read "Repeka" based on the following observations:

Not the answer you're looking for? Browse other questions tagged united-states 19th-century palaeography ohio or ask your own question.

8
What is the significance of a “right of dower” in this 1830s era deed (Ohio/New Hampshire, USA)?
9
Identifying Lemuel K. Preston's 1830s-era birth place of “Broome, L. C.”?
3
How can I establish an early 19th century birthplace?
7
Washington County, Ohio in the 1810 Census
11
Could an Ohio resident be in the Indiana militia? (Timeline resolution)
4
Finding record of Peter J Starrs in USA prior to 1870 Census?
4
Understanding 1807-1812 Pennsylvania land records document?
5
What is German translation of this Marriage record written in Kurrent?
4
Who were the wives of John Ervin (1791-1843)?