What was the nature of record keeping for land ownership in the Pfalz prior to the introduction of the cadastre/Kataster system?

Some time in the 1840s the French cadastre system of recording land ownership for tax purposes was introduced into the Pfalz region of Bavaria. Records such as the one shown below identified parcels owned by a particular individual, recorded the taxation amounts, and provided some information about how the owner came to possess the parcel. 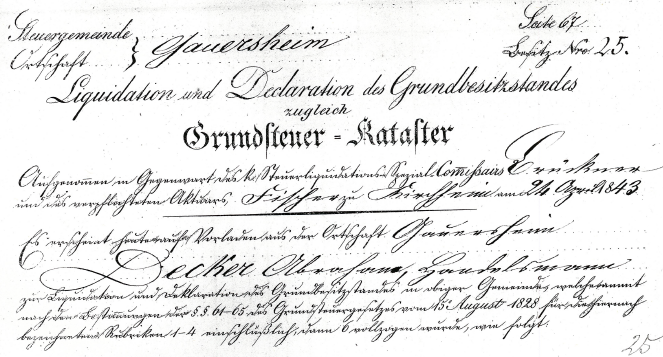 The details of individual parcels were arranged in a table like this: 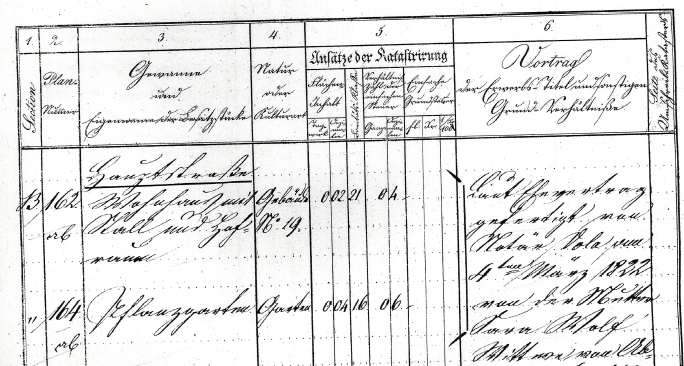 There was also an associated map that showed locations of the various parcels. My question is what kinds of property records were kept in the Pfalz region prior to the introduction of this system, and what was the origin of these parcel numbers? Was a survey done specifically for this purpose, or were results of earlier surveys reused? Who kept track of land ownership prior to the Kataster system? Do these records survive to the present day, and, if so, where can they be found? In the same archive as the Kataster records? Elsewhere? What are they called?

The Geschichte der Vermessung in Bayern (History of Surveying in Bavaria) can be found at http://vermessung.bayern.de/historisches.html.

The emphasis appears to be more on mapping than land ownership but it may suggest some more focused lines of inquiry.

Not the answer you're looking for? Browse other questions tagged 19th-century germany taxation-records bavaria or ask your own question.

6
Finding town or local church for distant relative?
6
Tracing Jewish ancestors in Germany before 1800
5
Dates in 19th century German records
2
What was required to be entered into “England, Cheshire, Land Tax Assessments, 1778-1832”
4
Where is the Friedrichsbruch near Kokotzko in West Prussia / Poland?
3
What first name for Brizendine surname is shown in this tax record?
4
What is this percentage column in the Virginia Land Tax Records?
1
What is this annotation on tax record for Virginia with no males?
2
What does 'for the ferm' (or possibly 'farm' or possibly 'feren') mean in Welsh Land Tax records?