What is written on the back of this photo?

The following is written on the backside of an image. The picture is of a very young girl with very curly hair, and the comments are by her father. While I can make out most of the words there are some about which I am unsure. Can anyone provide a reasonable transcription of the comments? 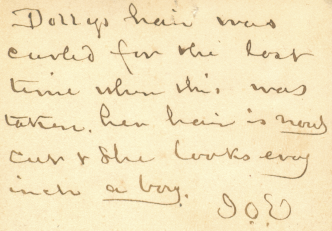 Here's what I can parse: 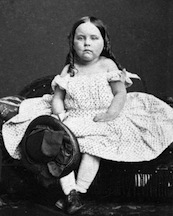 I think your original transcription is, as wzeigler also points out, correct on the issue of "newly cut" rather than "now cut" as in the other answers. The most significant clue is that the author obviously in the habit of leaving long tails on their y's and gs. Secondarily the lead in to the vowel lends itself just as well to being an e as an o, however this point is up for debate. Either word makes sense in context and does not significantly change the meaning of the note.

Combining all the results here, the final rendering runs as follows:

Dollys hair was
curled for the last
time when this was
taken. her hair is newly
cut + she looks every
inch a boy.
J.O.E

As noted above, it is possible that line #4 was meant to read:

(Note I have left the capitalization and apostrophe mistakes sic the original rather than fixing them as a couple transcriptions have done.)

Dolly's hair was curled for the last time when this was taken. her hair is now cut & she looks every inch a boy.

I would say "newly cut," since the ending is similar to "every" and "boy."

curled for the last

time when this was

cut & she looks every

Dolly's hair was curled for the last time when this was taken. her hair is very curly & she looks every inch a boy.

11
What can I learn about Sir William Brereton based on his portrait?
4
Can I obtain a free version of this public domain image?
8
What information can be gleaned from these Naval Academy accomplishments?
7
Weird date/year issues; what is the correct way to present the summarized information?
25
Who are the individuals silhouetted in this image?
8
How can I process this image to extract more of the information
5
What year does this toy tricycle appear to be?
1
When did FOX CO make photographs of this style?
1
When do you decide to add media to the Fact or the Source Citation?