I am trying to find the family name of the trapeze act (and ideally the individuals) who toured Ireland back in the 1950's with the Chipperfield Circus.

I'm struggling to find any resources that might help me.

Additional information: there are photographs on the Web of the elephants leaving the railway station of Clonmel, Co. Tipperary, but no details that I can find of the performances.

My first question was, What is the Chipperfield Circus and what or whom was the circus named after?

The Chipperfields can trace their genealogy for 300 years: a Chipperfield erected a booth on the frozen surface of the Thames in the seventeenth century during the great frost. They now tent in the West Country and specialise in animal acts. Animals are bred on a large scale and supplied to the other circuses. On my last visit to their quarters I saw twenty lion cubs varying in age from three to eighteen months and a magnificent litter of tiger cubs. James William Chipperfield, father of Richard, the present proprietor, was born in the Tottenham Court Road and boasted that he knew every village in Great Britain and could train any animal from a rabbit to an elephant. The great grand-father was a boot-maker and costumier in Drury Lane who trained pigs and dogs in his leisure time. He entered the show business as a conjurer, also carrying a puppet show in his back and was over eighty when he died.

The present Richard Chipperfield is a painter in oils of animals and a decorator of shields and flashes for rides and stalls. In the early days of the twentieth century he was a pioneer of moving pictures which he showed on the fair grounds. His sons and daughters, Richard, John, Marjorie and Maud, all perform on the show(1). Source-link

The excerpt that describes Richard Chipperfield as a "pioneer of moving pictures which he showed on the fair grounds" may also yield you some interesting information in the future.

The next question I had was, can I find anyone's name that is linked to a trapeze act with the Chipperfield Circus that was in Ireland in the 1950's?

When WWII broke out Fritz Rainert joined the army, and no less he joined the "Waffen SS" and was a gunner in tank. Stationed in France near the end of the war, the tank was hit, Fritz was heavily wounded and captured and imprisoned by Americans, escaping with others after several months, Fritz made his way back to his parents farm in Braunau where he was quickly sent packing as Waffen SS" were being hunted down - he hopped the border to Switzerland and stayed there for a few years completing his training and work.

In due course Fritz heard about Ireland and felt a calling to come here. Once here he worked at International Meats and with Dublin Meat Packers. This was in the early 1950's.

Frieda Rainert (aka Mausi to some) was on tour with Circus Krone from Germany, their family act was "Stey Familie" Trapeze and High Wire. Krone joined up with Chipperfield's Circus from the UK and toured, a leg of the tour was Dublin, Cork and Galway here in Ireland.

In Dublin, Fritz was an audience member with some friends, he saw Frieda climbing to the high wire and basically fell in love - he followed the circus on it's Irish leg of the tour and when they played in Dublin again he approached the family caravan and asked Frieda's father if he may take Frieda out to a dance.

They were wed shortly after in Dundalk before the circus left Ireland - yes it was one of those whirlwind romances. Frieda's family - "Stey" returned to Germany and continued being circus people, many are still today connected to the circus community and Circus Krone in Munich, the others are business people or traders - mostly involved in the festival and entertainment industries such as the world famous "Oktoberfest"(2). Source-link

My next question was, Can I find any other information about the "Stey Familie" Trapeze and High Wire family caravan? 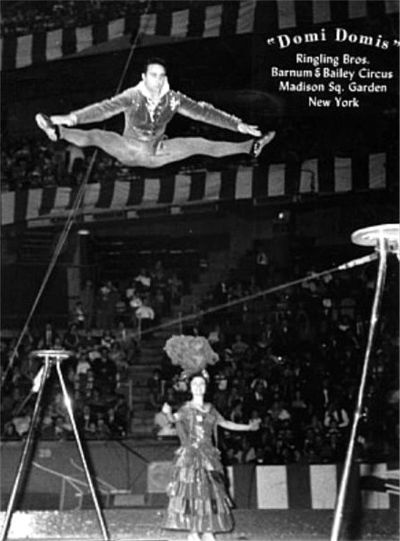 Yes, Many wonderful pictures and stories about the Stey Family as they perform their various acts(3). source-link

I hope this provides you with some valuable clues into your question. : }

Sources and other useful information:

Is it possible to inquire of a Chipperfield or the circus and learn if there are extant historical records or archives? If such materials exist, perhaps access can be arranged.

Discovering private archives and/or business archives can be difficult. The company itself seems to survive. Family members seem to be involved, quite likely descendants of those who were with the circus in the relative time period. Perhaps start with the source to learn about the extant historical records/archives.

Members of the Chipperfield family have been performing in circuses since 1684 and have a long tradition of working with lions, tigers and leopards. As the British public lost its taste for live animal shows, however, Richard and Graham moved to work in America ...

Another news article about the same time, "Mary Chipperfield and a ring of circus names" (1999). From the article, "Dick Chipperfield - Mary's uncle, who died at the age of 83 in 1988 - began performing as a clown at the family's fairground variety show when he was just five."

Note: Even general research about the circus exposes continuing activist initiatives aimed at the company. Hopefully your Irish family historian's interest (19th century; trapeze/high wire), would be far enough removed from the different controversy that some access to the extant materials could be gained.

4
Who would grant a lion tamer licence in northern England?

4
Where was Timothy Kelly born (married in London, died in Herefordshire)?
4
At what ages did British students enroll in school in the late 1800s and early 1900s?
3
Seeking marriage record of Pierce Butler and Anne Reynolds before 1832 in Ireland?
1
Finding records of Transport-office that John Smyth worked for in London prior to 1806?
3
Seeking online resources to do collateral research on Internet?
4
Locating information on John Megone from 1800's Ireland
3
Determining birth year (~1837) and birthplace of Jeremiah Ryan from Drumwood, Tipperary, Ireland?