How might a "nurse-child" have been placed with their carers?

In the 1861 census of England, the sister of one of my ancestors is shown living as a 'nurse-child' some distance across London from where her mother was in hospital. How would the placement of a nurse-child have been arranged at this time?

(The parents are elusive before 1861 — no marriage record I can find, and inconclusive census appearances — so I'm wondering if there might be some family connection to the carers.)

Mary Agnes Wright, oldest known daughter of John Charles Wright (1828? - 1904) and Ellen Brown (1829? - 1871) (also known as Caroline Ellen Brown), was born on 3rd July 1859 in Hitchin, Hertfordshire, England. John Wright worked variously during his lifetime as a Grainer, a Painter and Glazier, a Decorator and a Photographer.

The family are very hard to find in the census of 2nd April 1861. However, I have come to the conclusion that:

ColeValleyGirl wonders how the placement of a "nurse child" would have been arranged in the 1860s (UK).

I was not familiar with the term "nurse-child"/"nurse child" (as opposed to terms like "nursemaid," or even "wet nurse"), but the term seems well established. In use, I found its meaning could vary; good chance the term was more prevalent in the UK.

Hall Genealogy Website: Old Occupation Names, entry for "Nurse Child." "A child being looked after by another family for payment."

There seem to be a wide range of genealogy-centric opinion on how the term was applied/used in the 19th century--from the temporary care circumstance this hypothesis suggests, to extended foster care-like practices and to those more extreme/more nefarious. See references to informal arrangements (including "no payment") in "Lyn S, 04 May 05")* and to extended services (akin to foster care) [StoryTeller, "Who do you think you are Magazine (forum)," 2009]. 1

Haller cites news items of the relevant time (1860s). One such reference was "Baby Farming," from "Pall Mall Gazette, January 31, 1868, p. 5.x." It was least Haller's finding that most of the advertisements were "aimed at the mothers of illegitimate babies." A short clip follows from Haller's work. Please see the article for more details and specifics of her other references.

Baby farmers, the majority of whom were women, ran ads in newspapers which catered to working class girls. On any given day a young mother could find at least a dozen ads in the Daily Telegraph, and in the Christian Times, soliciting for the weekly, monthly, or yearly care of infants. .... A typical ad might read:

NURSE CHILD WANTED, OR TO ADOPT -- The Advertiser, a Widow with a little family of her own, and moderate allowance from her late husband's friends, would be glad to accept the charge of a young child. Age no object. If sickly would receive a parent's care. Terms, Fifteen Shillings a month; or would adopt entirely if under two months for the small sum of Twelve pounds.

One comment on RootsChat, "Nurse Child" by peterarkell* related the circumstance to the 19th century English Poor Laws. peterarkell writes

Before the Elizabethan poorlaw was changed ... [the] care of illegitimate children and their mothers was haphazard. The ... poor law changed this and placed the responsibility on the mother [who may have been] unable to hold a job and to feed the infant.

One solution ... was the baby farmer [who] would for a small fee, offer to take care of the infant. As soon as the money stopped coming (or before), the infant would be starved to death or just dumped in a convenient place.

This procedure continued until the end of the century when horror stories in the newspapers, compelled the government to act.

The research I did suggested a wide opinion about the circumstance of "nurse child," including that it frequently referred to situations that do not seem related to ColeValleyGirl's case.

Without other information, this would probably remain a noteworthy hypothesis for me. There seem quite a few moving parts with the hypothesis:

1 For a collection of links on RootsChat, see its Lexicon entry, "Nurse Child." You'll need to scroll to the entry. The second of those links is to topic "Nurse Child" (by peterarkell, mentioned above). The last link mentioned includes a number of folks inquiring, many seem in the same time period as this challenge. ("What does 'Nurse Child' mean?)

As GeneJ says one possible line of attack is to see if there are any records surviving relating to the mother's hospitalisation.

The National Archives have a Hospital Records Database which has a record for Guy's. It's quite a long list of locations, but the London Metropolitan Archives and the Wellcome Library look like the most likely places to hold whatever patient records survive.

A universal and critical dictionary of the English language: to which are added Walker's Key to the pronunciation of classical and Scripture names, much enlarged and improved ; and a pronouncing vocabulary of modern geographical names by Joseph Emerson Worcester and John Walker (Jenks, Hickling & Swan, 1854) gives this reference

fosterling n a foster-child, a nurse-child

A Google Ngram shows that "foster child" was used 7 times as often as "nurse child" in its corpus from 1861. More detailed analysis suggests that by that time, the most common usage of "nurse-child" was in medical texts and journals.

Although the following intriguing snippet comes from the tale The Star in the Desert in Sunbeam stories by Mrs. Henry S. Mackarness (B. Tauchnitz, 1863 - 325 pages) 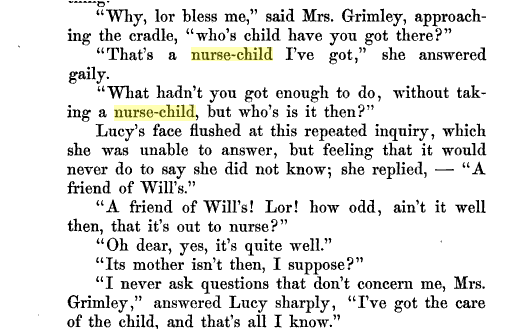 Of course, it is the job of the family historian to ask exactly those questions!

34
What does it mean if cause of death is listed as "Insanity" in late 1800s?
8
How can I assess the statistical probability that an individual is the one I seek?
2
Sharing DNA with Capon family.on AncestryDNA?

16
Locating an elusive UK birth record (Mary Ann Harper born circa 1865 possibly Dudley, England)?
4
What can I deduce if a grave is re-used?
8
How can I assess the statistical probability that an individual is the one I seek?
4
Where was Mary Ann Harper in the 1881 England census?
2
What is occupation that looks like "Pre MJ" on 1841 census from Cornwall, England?
4
Where is the 1911 Census record relating to Milly Bungay/Mason/Weston?
8
Finding an elusive ancestor after the 1901 census (who may have deserted his family)
7
Formulating a strategy to locate a marriage