I have found a document that notes the renaming of Edinburgh Field, Trinidad to Carlsen Field (click image for full size):

To get more information about the renaming (and the individual behind it) I would like to locate "General Orders No. 77" dated 11 Nov 1943. I have tried looking on Fold3 and Google but have not been able to find it. What would be my next step?

Here is the full war diary entry with "U.S. Naval Air Station" heading the page. The note called out above is about two thirds down: 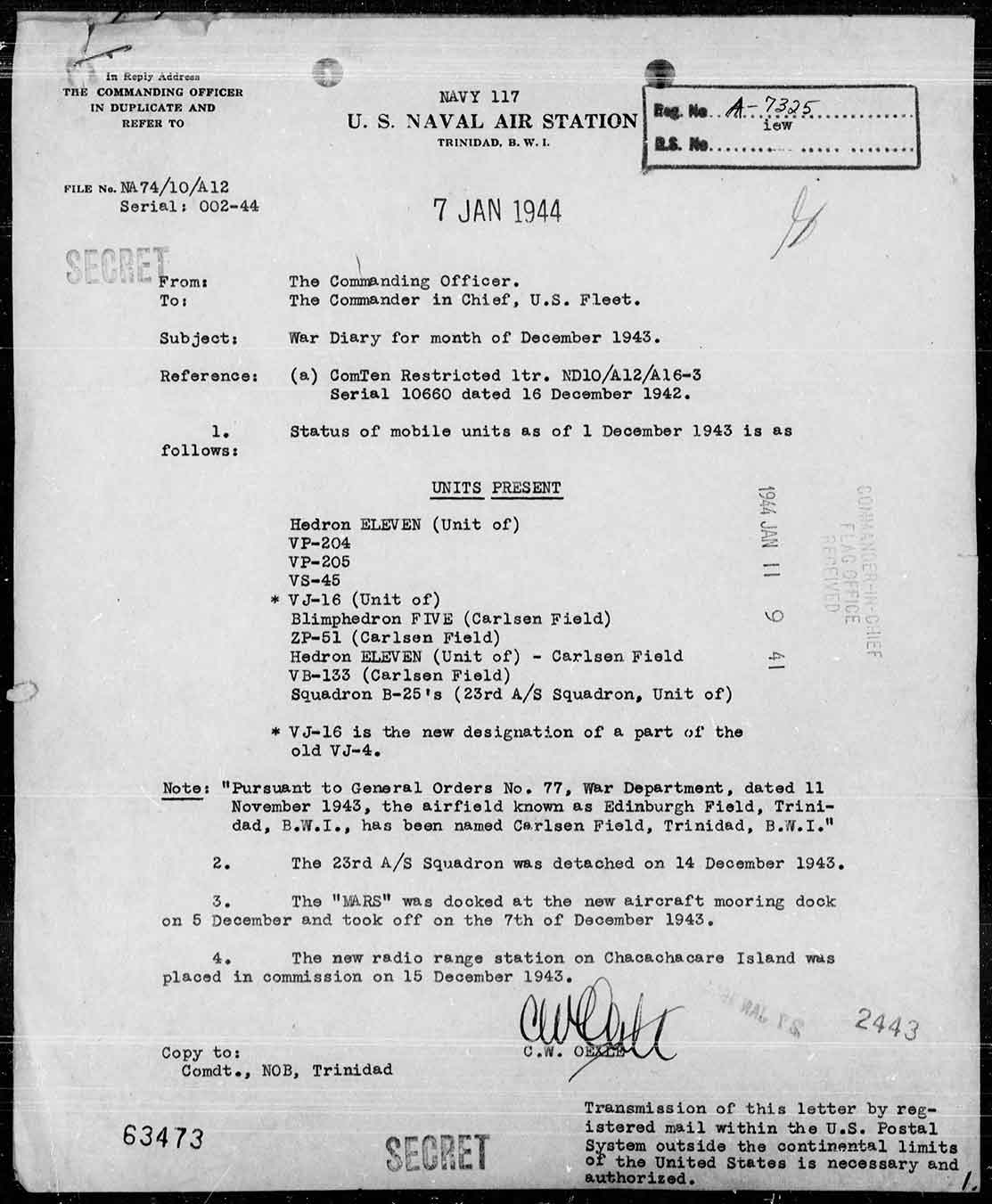 I am trying to corroborate a report found here, and gain more information about the person in question:

On the night of December 14, 1942, Captain Kenneth V. Carlsen, 35th Bombardment Squadron was operating a B-18 out of Edinburgh Field in Trinidad on an anti-submarine patrol when the aircraft suffered a double engine failure. He held the bomber steady as it fell towards the sea so that his crew could bail out. Captain Carlsen was killed in the resultant crash. Edinburgh Field was renamed Carlsen Field in his honor.

When a straightforward search for a record comes up empty, I think it's important to step back and look at the larger picture, so that one can understand the context of the record -- that often leads to clues about where one might find it.

"In grateful memory of Captain kenneth V. Carlsen, A.C. 0392224 who died in the service of his country in the Latin America Area, 14 December 1942. He stands in the unbroken line of patriots who have dared to die that freedom might live and grow and increase its blessings. Freedom lives and through it, he lives - in a way that humbles the undertakings of most men." signature: Franklin D. Roosevelt, President of the United States of America.

The same transcription was also published on this Washburn Co, WI GenWeb site. A similar entry appears in the book Cemeteries of Washburn County and the surrounding area, Volume 1 published by the Washburn County Genealogical Society in 2000 (the link is for the entry on Google Books).

Photos of these memorials can be seen on Find A Grave memorial #33593896, where the contributor of the photos says that the plaque is attached to his parents' marker. [Note that the memorial was created in 2009 and the photos were added in 2011 by a different contributor.]

The plaque says "A.C." which suggests to me that Carlsen was Army Air Corps rather than a Navy officer, followed by a number which might be his service number. The second photo confirms this, with "Army Air Corps" spelled out in full on his own marker.

Q2. What is the history of Carlsen Field?

To resolve the confusion over whether Edinburgh Field aka Carlsen Field aka Carlsen Air Force Base is an Army Air Base or Naval Air Station, here's the history of the base on Wikipedia. The US acquired the rights to have a base there from Great Britain, and the base was used by the USAAF, the Navy and the RAF. Wikipedia says "in the fall of 1943 ... the 80th Seabees were brought in to build a station at Carlsen Field."

So -- to answer the question "who might hold records relating to operations of Edinburgh Field?" -- the answer might be all or any of these entities.

Some insight into the operations can be found on Scott Murdock's USAF INSTALLATIONS PAGE !. Scott published as part of his site a list by Joe McCusker of Air Force Bases. Note point 3:

A word about Army air fields, air fields and fields

Generally, Army Air Forces installations were named two ways: when named to honor individuals they were designated "fields" and when named geographically, they became "Army air fields." (The designation Army air base was also used.)

Between the time the Air Force was established on September 18, 1947, and the first designation of Air Force bases on January 13, 1948, some Army air fields may have dropped the word "Army".

Carlsen appears further down on the page under a list of "Lend Lease" bases.

Of particular interest is the page Installation Research Tips, under the section Research Documents. Scott says:

Key events in an installation’s history are announced by the publication of a special order or general order. The Department of the Air Force (DAF) or the respective Major Command (MAJCOM) may publish the order (sometimes both). These orders are important to an installation's history much like promotion or PCS orders are important to a military person's career—they are the "official" source of the action they describe. Orders are not always perfect! They are occasionally published with errors and may be revoked, rescinded, or amended by later orders.

Two repositories that might be of help: the National Archives, and the Air Force Historical Research Agency. Their Welcome Page describes their holdings has links on how to make a FOIA request. For holdings at NARA, see the introductory page Records of U.S. Army Operational, Tactical, and Support Organizations (World War II and Thereafter) for their extensive overview. NARA's guide to the Freedom of Information Act (FOIA) provides instructions on how to request information from NARA.

As for Carlsen's military records, I believe what you can get via a FOIA request is limited unless you are a member of the immediate family. (See the update about IDPFs for possible redactions.)

See NARA's introductory page to Research in Military Records. It may not be possible to learn more about the actual incident if access to the records is restricted, but perhaps archivists at one of these two institutions could answer the question of what records are available to the public.

Other finding aids and oral histories, including this article Was It the Air Corps or Army Air Forces in WW II? can be found at the website of The Army Air Forces Historical Association.

Oh, wait! Those personnel records are restricted for a limited time. Since Captain Carlsen died in 1942, his records should be available, if they survived. See this page at NARA:

That page also has this link to more information about the 1973 fire at the NPRC and the efforts to reconstruct records lost.

See also the website http://www.armyairforces.com/ for their Research Help page, forum, and other resources.

The National Archives and Records Administration (NARA), during their 2014 Virtual Genealogy Fair, presented several sessions about finding files about the military, one of which is of direct interest for the question about finding the military records for Captain Kenneth V. Carlsen.

In session 14, "Individual Deceased Military Personnel Files (IDPFs)", Bryan McGraw (from the National Archives at St. Louis, MO) gives information about how to request the files for service members that died while they were in service, and gives an overview of what material might be in the files. He says that the Social Security Number and other personally-identifying information is scrubbed if the person making the request for records is not a relative (what they call a "third-party" request).

The slides for the presentation give examples of the types of forms and information which can be found in the IDPFs. These files document the death itself and the actions needed because of the death. They are not the main service files. Files from the 1940s are described as 'fairly small (dozens of pages)'.

NARA has a page on their website where they list Microfilm Publications and Original Records Digitized by Our Digitization Partners. One of the entries is:

Fold3 says the records are "organized by year then by aircraft serial number." A search for "Carlsen" did not bring up any results (note I did not try any spelling variants). However, since you know the date of the incident, you might be able to find reports about the loss of the aircraft in other record groups, or by browsing through this publication during the late 1942 - early 1943 time period.

NARA's reference paper for this microfilm publication gives a history of the reporting requirements for this period, and lists other record groups where an incident report might be found. This case provides a good example of why it can be useful to read the reference papers for a particular record collection even when we don't find the name of the person we're searching for in the name index.

NARA has recently introduced a new Catalog -- for an introduction and overview, see the video How to Use the New National Archives Catalog on NARA's YouTube channel. This is exciting because not only can you see the catalog descriptions of the records, but NARA is also making efforts to make digitized copies of the records themselves available online. Users can also register to transcribe these records through the Citizen Archivist Dashboard.

This image is an excerpt from World War II Honor List of Dead and Missing Army and Army Air Forces Personnel from Wisconsin, 1946 which is part of a series of reports listing WWII Casualties for each state, held as part of Record Group 407, Records of the Adjutant General's Office, 1905 - 1981.

This snippet from image 37 lists Captain Carlsen along with other people from Washburn County.

The earliest images in the document explain the fields seen in these tables. The name of the service member is followed by his Army service number, his Grade ('synonymous with the misnomer "rank" '), and a code for Type of Casualty. "DNB" is "died, non-battle". The lists were intended to include those persons who died in a line-of-duty status. (see image three).

For more information and links to further resources, see Amy Johnson Crow's How to Decode a WWII US Army Serial Number (posted on June 8, 2015).

Another entry in the catalog search results was:

Trying to retrieve this catalog entry resulted in an error message, so check back later to see if it will be of interest. New material is being added all the time, so it's worth it to visit from time to time to look for more documents.

Not the answer you're looking for? Browse other questions tagged united-states research-methods military-records navy renaming-places or ask your own question.