How do I parse this citation into a source, citation detail and citation text?

I've discovered some useful information on FamilySearch.org, and they very helpfully provide a full citation for each record. An example of one I'm specifically interested in is this one:

I'm fairly inexperienced with citations but I'm learning fast, and web sites giving ready-made citations like this is a massive help, but to sanity check what I'm doing, I have the following questions.

Which parts of this citation are the source, the citation detail and citation text? I'm using Family Tree Maker 2012 which has templates based on those presented in the book Evidence Explained by Elizabeth Shown Mills. Which of those templates best matches this style of citation? They are based on American data so it is not always obvious.

Also, the rating of this evidence is important. FTM provides a 4-star rating system where each star represents:

My asumptions for the above record were:

Do you agree with my classification? Interestingly there is a duplicate record for this baptism, for 13th Jan instead of 18th Jan. 13 and 18 might be easily confused so I can see how this conflicting evidence would arise, but it is odd to find two conflicting records within the same database.

FamilySearch "adheres to the principles of 'Evidence Style' as presented in ... Evidence Explained ..." By observation, FamilySearch's "Citing this record" entries tend to follow more closely Mills v. 2009 (not 2007). (Then again, I haven't viewed every FamilySearch collection, much the underlying citations.)

More directly on point. Essential elements are below:

In FTM for Mac, I selected the template, "National Government Records > Databases > Database Online - Generic." (There are templates for United Kingdom records; I still chose the generic option.) 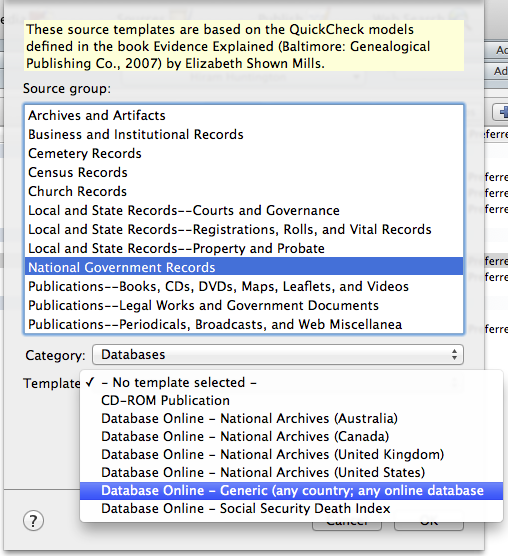 I entered generic information as follows 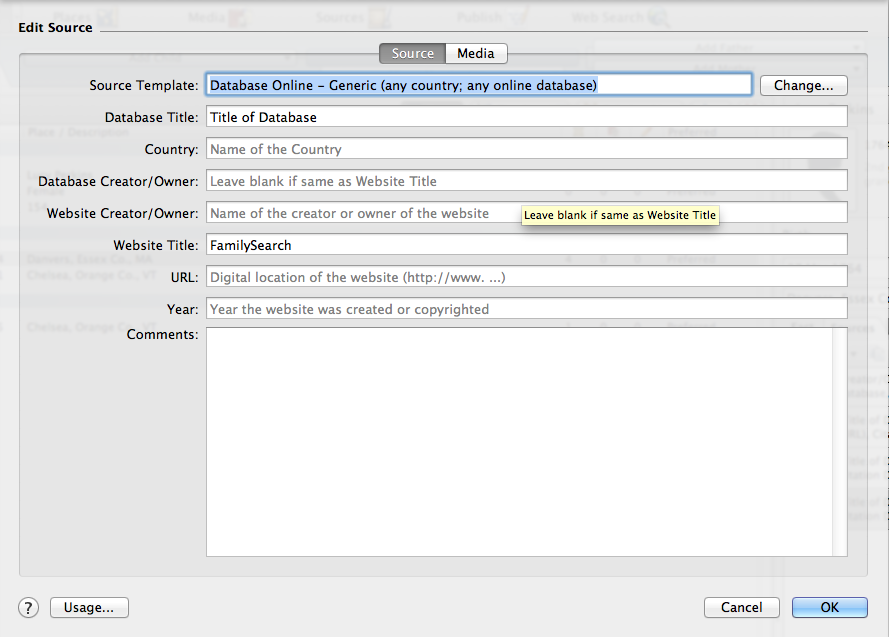 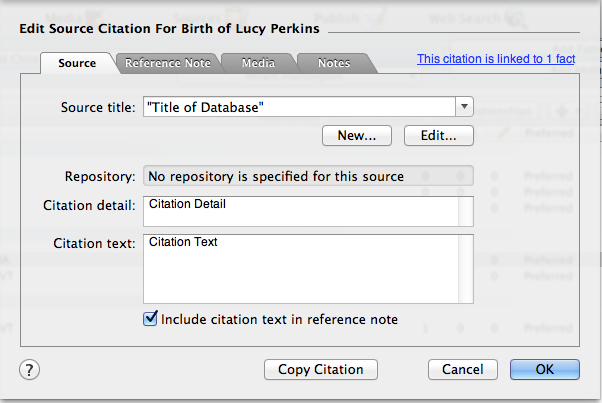 I hope it is obvious that you would substitute the terms "England, Births and Christenings, 1538-1975" (without the quotes, as the program adds those) for my "Title of Database."

The FTM for Mac default output from this template is below; it can be edited within the program.

Given the different contraints, into the Citation Detail (FTM for Mac), I would type

There will be a little punctuation to clean up (comma out of place and extra period at the end), but all your basics are there.

As an added personal note, ratings such as these reflect the genealogists constant work to seek out information from diversified and high quality sources.

note 1. I understood that little theory changed between the 2007 and 2009 editions (for the life of me, can not find that reference), but observe personally that the formatting changed considerably.

10
What source detail should I include for a digital book?
5
Data Model for Family Tree Maker 2012 (sources and source citations)
4
US Federal Census citation details and citation text using FTM for Mac
7
How should I refer to this church in a citation
7
Citing online image copies with inadequate information or provenance
3
Citation of both folio and page in England census
1
Should a transcript appear in both the media and the citation?
0
Fields required to specify a video in source / citation
0
Creating Source / Citation for military document