My Great Grandfather Dissappeared - what happened to him?

There were many family stories, most said he had died by 1910. My mother had told me that her father thought he had been in contact with his family until my grandfather became an adult based on an Uncle and an Aunt providing his clothing and necessities. He believed his father was sending money to his Uncle to support him.

The only records I have found are his WWI draft registration 1917 in Fargo, North Dakota and a few newspaper articles in Legrand, Iowa. One in 1911 about his mother's death saying he was living in Colorado and another in 1926 that his brother was asking anyone who knew of his whereabouts to let him know as they hadn't heard from him in several years.

My mother said her father had heard from him in 1931 and was living in Texas, although my grandfather was deceased by the time I heard this story and I was unable to validate it. It was well known that my great grandmother was very controlling in almost all aspects of my grandfather's life (even when he was an adult) and very bitter about John Draper so if there was any attempt at contact she surely would have squashed any further communication, which leads me to believe that there may be truth to the 1931 story.

I have searched through the records and each time I find something that may be promising it ends up not being him.

Looking for help or suggestions that may help me find out where he ended up or when and where he died.

Oh, those missing-in-action/elusive ancestors. I have a great grandfather who is elusive. He lived just earlier, though. This case is different. Even though your John Albert Draper has common names (given and surname) he was born in the US and lived during a time that I consider a "sweet spot" of opportunity. There are likely an array of modern records about him (and about others with similar names); the WWI draft registration being key among them. If you develop a plan and stick with the work, the odds are very good that you will solve this case.

While not applicable equally to every race, color and creed, the record circumstance (including accessibility) is remarkable for those researching U.S. born men who both registered for the WWI draft and survived beyond 1920. Consider that in addition to the draft:

In order to locate the records about someone, you need to be able to identify them. There were more people in this 1900-1920+ time period; more names to be easily confused. The records continue to contain errors and omissions. The population is increasingly mobile = more work to identify persons (from confused wannabes) within each new setting. Especially in the Midwest--not every man now owns a farm nor becomes a farmer. How dare them, some move to urban areas (often, more than one).

The backstory about John Albert Draper (family split, etc) explains a perspective, but it doesn't really change the work. This challenge involves a common name and large geographic area. (As to the latter, tradition suggests mostly US Midwest, but stretching from the Canadian border down to the Gulf of Mexico.)

When the work seems "stuck," it is often a clue to step back in both time and place. Revisit earlier information and/or "inchworm around" to learn more about the subject. You might lay this out on a timeline/spreadsheet, with columns for date, locations, names and events/comments.

I became very interested in your challenge when I read John's WWI draft registration. I made notes as follows: 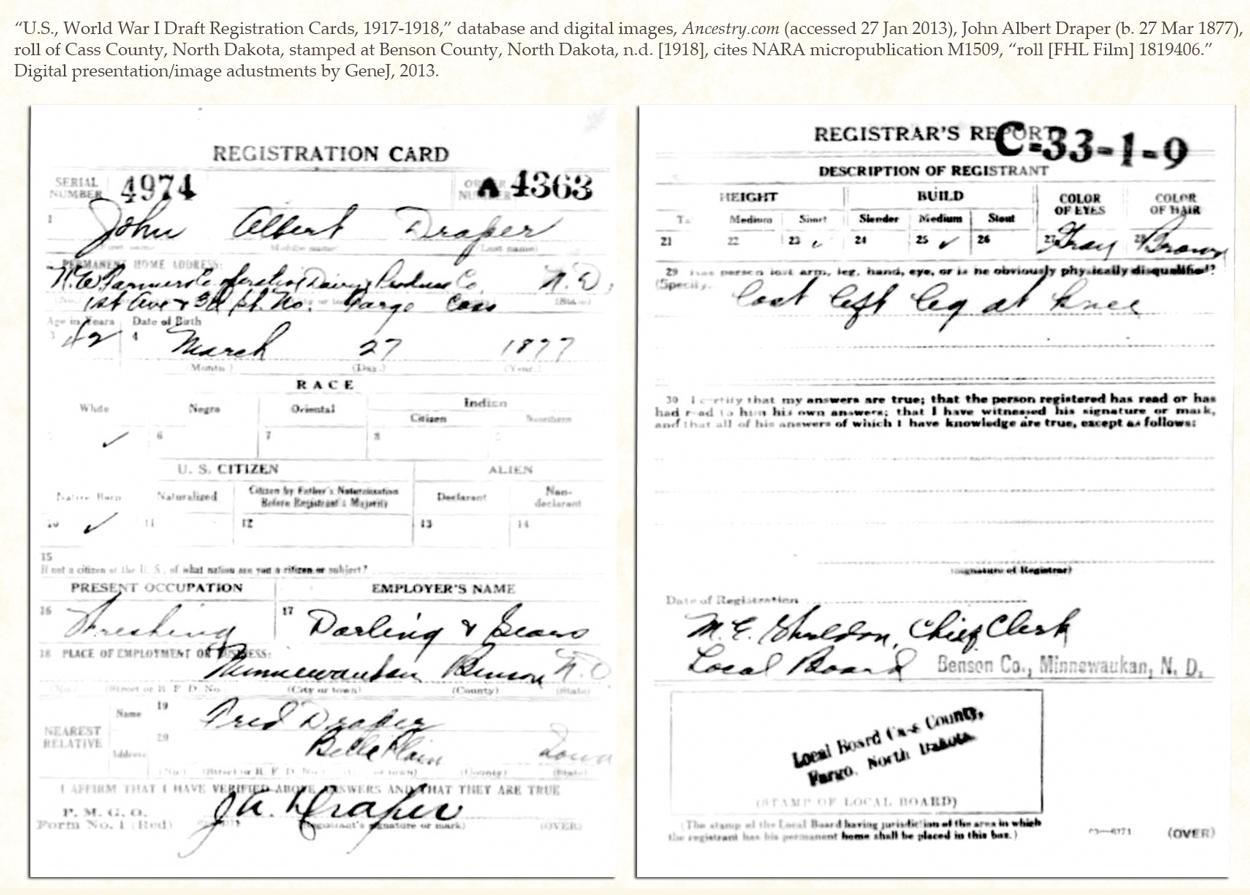 To the extent that you do begin continue to look for your ancestor in many of the different midwestern and western states, you might consider the following tips and information.

I made notes about a few of Colorado collections this week, as below:

While I was not able to fully identify the man in the entry, one J. A. Draper is found in the 1910 U.S. census at Kansas City, Missouri; has wife "Mrs. J. A. Draper." By some additional research (below), his name can be devised as "John A. Draper." This seemed an entry you would want to memorialize in your research notes. Comments follow.

Census entry: The couple resides 414 ?Aldine Court; census reports they have been married two years (first marriage for both). He is age 33 (thus b. ca1877); his birth location and those of his parents are all "un[known]." This J. A. is a driver/Hack; The FreeDictionary online defines a "hack-driver" as a taxi driver. [(View this image at Ancestry.com) You'll have to forward to the next page to view the entry of interest].

City Directory: The graphic below is from the 1910 Kansas City (Missouri) City Directory. I have highlighted the information points by which my logic followed that J. A. Draper in the 1910 census was almost certainly "John A. Draper." Also that "Mrs. J. A. Draper" was most likely otherwise, "Winnie (_ _ _) Draper." 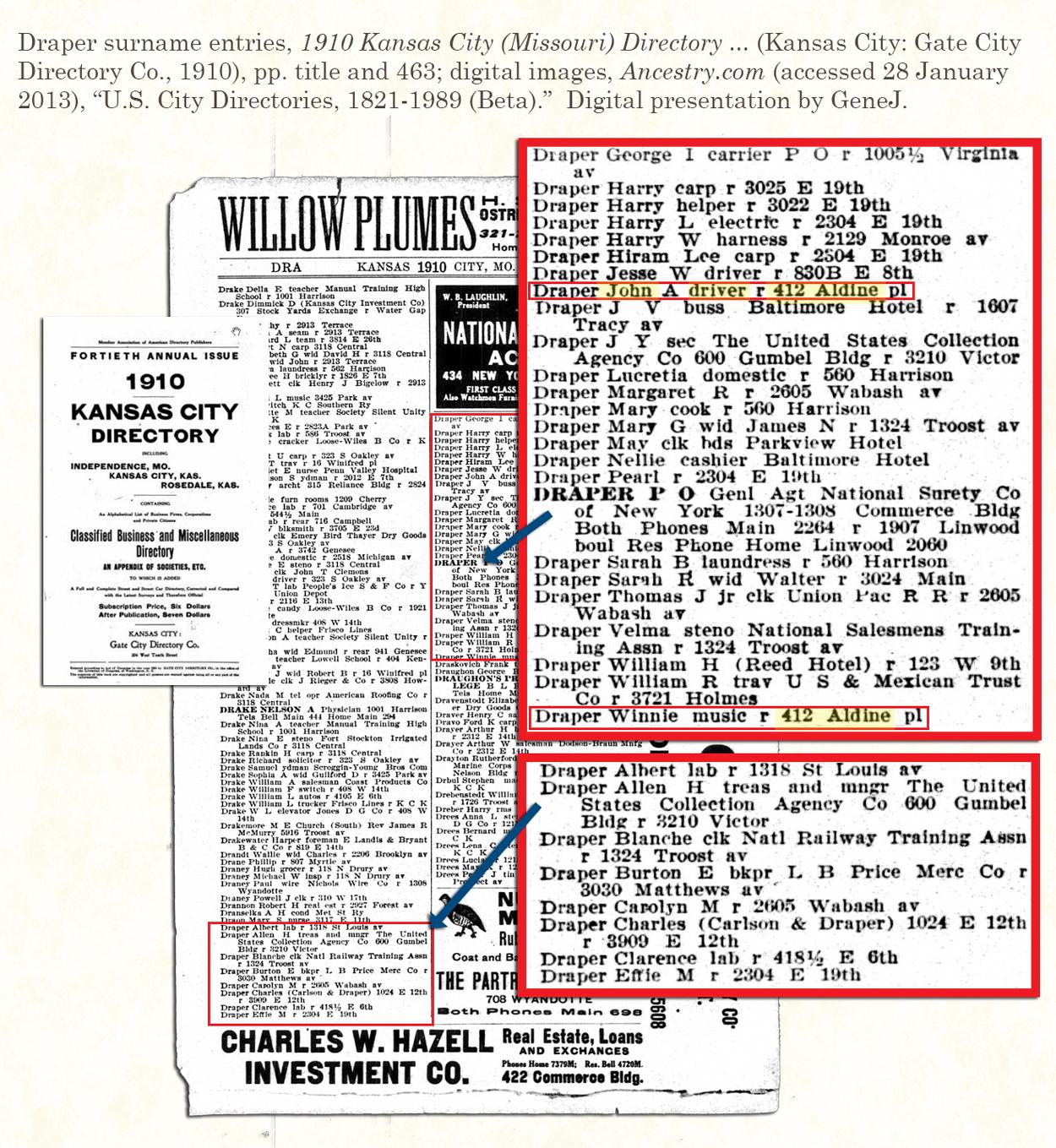 As if there were not enough ...

I found the names "John Draper" and "John A. Draper" to be common. There is evidence of what seemed an unrelated John Albert Draper born in the 1940s at Texas (and what seems a Jr.; perhaps a III). The name becomes even more common when you consider ordinary alternatives--J. Draper; J. A. Draper. All this got a chuckle out of me when I came across the news item below. 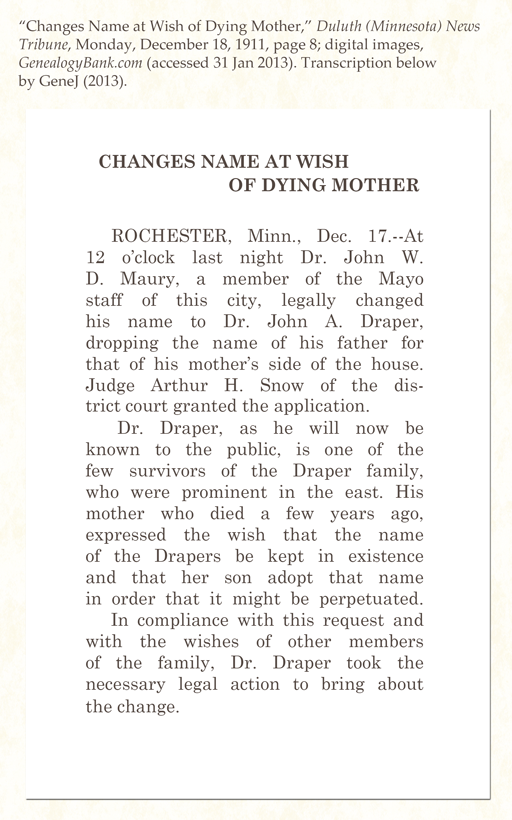 Make a good plan and take the time to reasonably exhaust the different resources. Consider setting up a free public wiki as a workspace. I'm confident you will solve this one. There is a great story to be told here.

Thank you for reviewing my post and for all the research into my brick wall.

The LDS church has their marriage record listed as June 5, 1905 in Linn County. It has their names and their parents names. I have located all family members of both John and Mabel who were all living or near Belle Plaine and What Cheer respectively, up through 1920ish. Neither of them had family in Linn County that I have found. I thought they got married there for that exact reason, likely to hide their real marriage date to save family embarrassment.

Regarding the draft registration, I thought draft record said Cast left leg at knee, now I can see that it says lost leg at left knee. Thank you for bringing that to my attention. Yes this is definitely him, Fred Draper in Belle Plaine was his brother.

I had noticed the two different locations on the draft card. I was unable to figure that one out either. As far as I know, the Draper stayed in Marshall/Benton county area so I had no idea why he was in North Dakota and I couldn't figure out why the locations of the addresses he provided were so far apart. I also determined his occupation to be threshing, so possibly he was working in agriculture, that would tie into the dairy and produce company.

I am not certain how John and Mabel met, she would not talk about him so my grandfather had very little information. My mother thought she had overheard one time that it had something to do with the railroad. His brother Fred was a conductor for the railroad, so I theorized that possibly he met Mabel riding the train with his brother.

Their relationship prior to marriage may have been more of an "encounter". They married in June and my grandfather was born August 31st. My guess is that it was a forced marriage since Mabel was clearly 6 months or better pregnant when they married.

I found it was odd that her child was born in Keokuk, but possibly she went there to be close to her family when she gave birth and then returned to Belle Plaine after Donald was born or they married for namesake and Mabel stayed in What Cheer but moved to Belle Plain after their child was born. John never lived in What Cheer. After John disappeared Mabel continued to live in Belle Plaine and newspaper articles indicate she associated with the Draper family until after she remarried and moved to Des Moines about 1920.

My mother was told that Mabel had John declared dead but I found her divorce decree stating she lived with John Draper as man and wife from June of 1905 until early 1906, that he did not return home and she had no idea where he was, she had not seen or heard from him since. Her claim for a divorce was abandonment.

Not the answer you're looking for? Browse other questions tagged united-states 20th-century iowa north-dakota or ask your own question.

10
Why did my Uncle's Death Certificate Not Appear in the Family History Library's Archives?
6
Learning great-grandmothers maiden name when courthouse burned down?
5
Searching for 1948 C&EI Railroad Employee?
5
How to find service record of Boston police detective (1945-1968)?
8
Finding late 1930's ship departures from the Port of San Francisco?
2
Finding documentary evidence for father of somebody born 1903 in Kentucky, USA?
4
How to confirm my research of Charles P. Cantrell?