Can anyone decipher the name of this Royal Navy ship in Beruit in 1861?

Thanks for any suggestions

See the Wikipedia article, "HMS Queen," for "Seven ships of the Royal Navy have been named HMS Queen."

More about this specific HMS Queen available at Wikipedia, "HMS Queen (1839)," which also references the 1859 re-fitting. Reports that, "...being able to cruise at 10.5 knots she was commissioned into the Mediterranean Fleet until 1864." 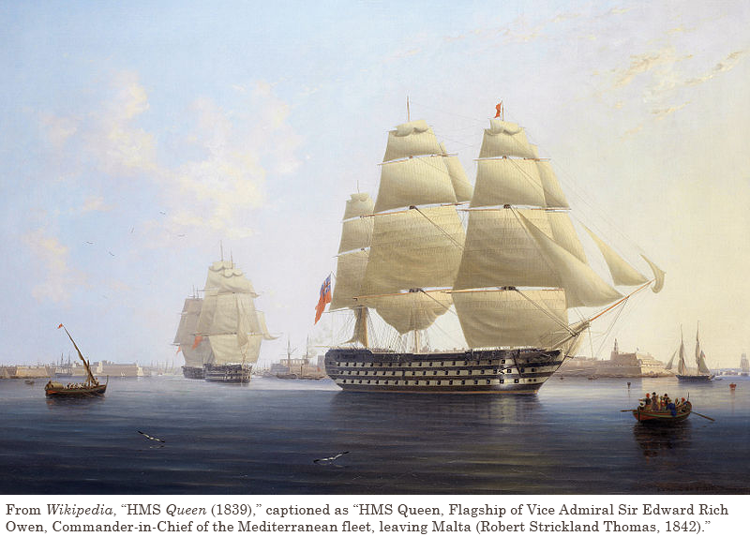 Further research on this site shows that on 17 November 1859 Captain Charles Farrell Hillyar was in command of the ship in the Mediterranean.

9
How can I find out the name of this street?
13
Can anyone decipher the comment above Louis' name on this 1940 census record?
8
WW2 Royal Navy Patrol service records mystery
2
Finding more details in 1851/1861 Scotland Census?
7
What does 1851 UK Census "Relation to Head of Family" entry that looks like "Depen" mean?
3
Would Royal Navy Captain's Log (1759-1766) be likely to mention Captain's Clerk?
4
Locating information on John Megone from 1800's Ireland
2
Reading occupation in 1906 Denmark Census image?
2
Transcription of an 1835 will entry in Prerogative Court of Canterbury Wills record
2
Does anyone know where Gilford, Yorkshire is / was?