Should I ignore possible family information because it far too precise for its age?

Children of JOHN PARKS and MARY SHARP are:

I have seen it on several Ancestry.com trees, virtually never sourced, except for one website (which seems to have disappeared) which included the explanation it was from a diary and notes:

These are the children of T. Parks, a brother to John my Grandfather's according to the memory of Benjamin Parks of Wilkes Co. N.C.This Aug 9th 1848 (Signed) E.M. Parks...

J Maddox asks argues that this data is most likely fake at the Parks Family Genealogy Forum.

I am not sure how much I can contribute from my perspective of (mostly) English-based research, but these thoughts might (or might not) help you to think more clearly.

Precision: In English genealogy of the same period, it would be highly unusual to get 15 children all with an exact birth date. But that's because most of our records are based on parish registers, which document baptisms not births (plenty of births can be found - they're just the exception). Hence if I found 15 children with exact baptisms, I'd think nothing of it. Conversely, 15 children with inexact baptisms would raise an alert - "What type of source would document baptisms but inexactly?" (Again - it happens - just not very often). I know these are births not baptisms, but the number of times I've seen the two confused is large.

So - what might the underlying source(s) have been and is it plausible to have exact birth dates in such a source? (Rhetorical question).

If we don't know, then we don't ignore the stuff, we document it somewhere and (maybe) follow it up later (with luck).

Plausibility: How plausible is the data? Are there any inconsistencies? This goes partly back to the precision issue. But we can also look at the intervals between the children - ANN PARKS, b. September 15, 1742 followed by WILLY PARKS, b. March 24, 1742/43 seems downright impossible to me. A six month pregnancy? Ditto the first two - Rachel b 3 Dec 1733 followed by Elizabeth 27 Feb 1733/34. (Of course, if these were baptisms, it becomes not impossible, just unlikely). There's also the aspect of where the births take place - Maddox points out they swap between NC and Va - indeed, he has the lovely phrase "Near as I can figure John and Mary lived on a pair of roller skates."

Motive: Last time I read Sherlock Holmes, the question of motive for a crime loomed large. In this case, what is the motive for concocting exact birth dates? I can't see any, so I'm inclined to believe that the dates have a basis in fact (either as birth or baptism dates) until proven otherwise. What is the motive for linking all those births to a specific John and Mary Sharp? All sorts - wishful thinking, misunderstanding the coverage of data (i.e. assuming you have the full list of possible parents), assuming John here must be John there, etc.

So - the precision angle doesn't worry me personally because (swapping the births for baptisms) it doesn't seem unusual in my experience of England. But other aspects definitely look odd.

It does NOT make sense to reject the information simply because of its level of precision. On the other hand, there are other reasons to be cautious in how you use it.

If you adopt a sceptical evidence-based approach, then rejecting something out of hand is just as illogical as accepting it without question.

Chris asks, "Does it make sense to ignore possible family information because it far too precise for its age?"

Usually it does not make sense to ignore information because it is precise. I usually use the term "detailed"; have entered many sources as below (emphasis added):

Just because I create a source record doesn't mean I enter the related family data to my working file. Depending on how much you have already discovered about that family, you may want to follow this little jingle, "If it's a new clue, then it's a to-do."

Chris writes, "I have seen it on several Ancestry.com trees, virtually never sourced ... J Maddox asks argues that this data is most likely fake."

By my brief review of Maddox 2009 notes, the work fell short of proving the Parkes genealogy was "likely fake."

It is unfortunate that the information on this family is largely undocumented, poorly researched, and in some cases blatantly fabricated. It is sad that this is handed down to future generations without any fact checking.

Maddox also adds this important statement of his perspective,

I am not a Parks researcher or a Proctor researcher. I am however, a Sharpe researcher and have researched the family of Elias Sharpe in order to eliminate him as a member of my family.

The bold claim about Parkes materials being "blatantly fabricated" may have been written out of sheer frustration.

(b) What information is presented?

The two postings I reviewed were mostly Sharpe research notes. I roughly followed the logic that some of the Sharpe information creates a conflict with some third party information reported "about" Mary (Sharpe) Parkes. (I did not find a summary or otherwise follow the logic about how the collective Sharpe materials disprove the Parkes information, in part or in whole.)

7th paragraph from top, as below (emphasis added):

5th paragraph from bottom, as below (emphasis added):

Now we get to the Parks/Park/Parkes of King George County. A thorough study of these Parks names (including the above variations) for King George County Deeds, Wills, and court orders for the period 1721-1759 reveals of total of two. One is a William Parks mentioned in a March 5, 1735 court order. The other is a George Park on March 3, 1748. That’s it!!! Each mentioned only once.

Parkes/Sharpe researchers: A clue that should be a to-do

The Parkes family is mentioned several times on the Wilkes County, N.C. GenWeb site and archives.1 Parts/some/all links to the archival work have also been contributed to the FamilySearch Wiki page, "Wilkes County, North Carolina." At the latter link is reference to the Revolutionary War pension file of "Samuel Parks," and links to wills/estates (inc. a John Parks Sr. and a Thomas Parks). 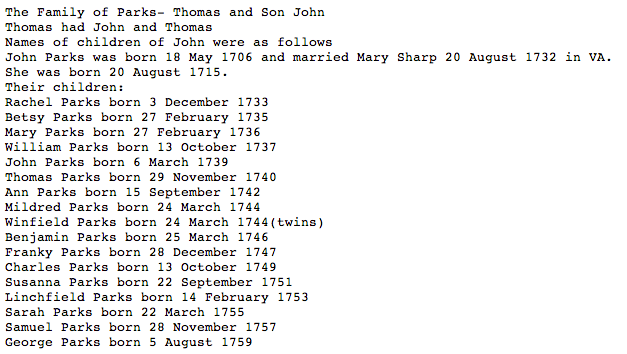 A second Parkes bible is listed in the the same archive collection.

Every source has a story to tell; all sources--family trees, historical records, old family bibles--are subject to error and omission.

P.S. In my family, we have vital records from some New England towns that date back to the 17th century. I wish we had a family bible that contained entries so early.

Good for you for being sceptical and looking for source citations! This information should be recorded and kept (possibly in a tickler file) and then used as clues to hunt down and verify or disprove. I definitely do not import any information into my master tree files unless I have multiple pieces of evidence that lead me to believe that the information can be (mostly) relied upon. When I only have leads, hunches, or questionable sources, I note this and then keep them on a side-burner until I can gather more information to prove or disprove the theory that someone was so-and-so's brother, was born in this year on this date, was the second wife, etc.

That being said, just because you have great detailed notes from a possible ancestor, does not mean that it is necessarily all false. Family Bibles are great examples of artifacts that can provide rich details. It is important, as mentioned above, to verify these leads with corroborating sources however. Possibly information from community newspapers, legal documentation, censuses, etc. I look at personal narratives (diaries, oral histories, etc.) as jumping-off points to start an exciting search for the truth.

Not the answer you're looking for? Browse other questions tagged united-states birth-records 18th-century evidence or ask your own question.