Jacob Fisher and Sarah Hodges (married in 1773 in Sharon, MA) - who were their childen?

Page 27 of the Sharon, Massachusetts Vital Records show Jacob Fisher and his wife Sarah had a son Jacob born 30 Apr 1776:

Page 94 of those records show a marriage record of Jacob Fisher to Sarah Hodges on 7 Oct 1773:

I am interested in who are the children of Jacob Fisher and Sarah Hodges. I am presuming they are the same as the parents in the previous record so one child is Jacob born 1776. But the question holds even if they are different.

Through the DNA testing, I found I shared common DNA with someone. We both have Fishers in our ancestry (my paternal grandmother). However we have not yet been able to connect the dots and so we are trying to extend our Fisher line to find common overlap. The reason for asking about the children is look for links with my shared-dna correspondent. Note if we can find a potential connection, the dna evidence may be collaborating, non-definitive, evidence.

The entry for the marriage of Jacob Sr and Sarah suggests that they were both long-term residents of Sharon (because other entries on the same page give another township of origin for outsiders). If this was the case, we would expect to find their births in the records of the same location. One possible explanation for not doing so, may be changes in the town boundaries. It may be necessary to search Foxboro or Stoughtenham as precursor authorities.

The records of deaths in Sharon

At the 1800 Census, the only Jacob Fisher living in Sharon has a household of 1 male and 1 female over 45 years and one male aged 10-16. That and the death date for Sarah suggests Jacob Jr has moved away and that Jacob Sr remarried (see Elizabeth m 1794, and d 1825) and may have had another child. (Note also the possibility of another marriage before Sarah, to see Elizabeth d 1773.)

In 1800, there were three other Jacob Fishers in Mass. One of these resides in Mansfield (in the same county as Sharon). The ages of that family (head of household and spouse 16-26 years, child under 10) is consistent with what is known about Jacob Jr. The other two Jacobs are recorded as being older (in 1800) than Jacob would have been.

At the 1810 Census two Jacob Fishers are resident in Sharon. Both are reported to be over 45 years of age (a considerable exaggeration for Jacob Jr). The father's household includes a female of similar age and the son's two females (one 10-16 and the other 16-25).

By the 1820 Census, there is one household headed by Jacob Fisher (aged over 45) which included 4 females (one less than 10, one 16-25. and two over 45). This would be consistent with known facts if Jacob Jr took in his father's widow (his stepmother).

In his course on inferential genealogy, Tom Jones suggests that most genealogical questions come in two flavors, those of identity or relationship.

Rare is the case where early vital records of New England towns provide enough information that all by themselves, the information is sufficient to prove the identity and genealogical relationships of those whose records are there memorialized. We know the US census do not report about relationships until 1880; we don't even have a record of household member names until 1850.

Although limited resources are being observed, there seem to be some obvious inconsistencies between the premise and those (few) resources.

As with all sources, biographies are subject to error and omission. It is often helpful to learn if more current work is available. Likewise, to confirm the sources and discover inconsistencies yourself.

Updated: The profile Duncan provides for his Jacob Fisher (d. 1820), reports a death at Bolton, Worcester County, Mass. and a wife Ann Pierce (m. at Boston in 1803). See Bolton Births (Fisher), Bolton Marriages (surname Fisher) and Bolton Deaths (surname Fisher). The Jacob Fisher 1820 death record gives the wife's name (Ann), but doesn't provide his age at death. Just when this Jacob Fisher was born is not obvious from the records of Bolton, but the birth date in the profile seems to be that of the different man who was of Sharon.

Just stumbled onto this old posting, but since I'm also researching "my" Jacob Fisher (married to Sarah Hodges), I thought I'd post this: (I never saw JOEL as a son of theirs on any of the above documentation. He is MY direct relative and his father/mother are Jacob and Sarah. . . or at least I think they are ;)

NELSON FISHER was born in Pompey, Onondaga county, New York, October 30th, 1809. His father, Joel Fisher was born near Boston, Massachusetts, May 20th, 1780 where he lived until he was about twenty years old, when he went to Onondaga county, purchased a new farm, and lived there until 1826. He then sold out, and moved into Chautauqua county, and purchased a farm inHarmony, where he lived until his death, which occurred October 8th, 1850.

January 30th, 1803, he married Miss Charlotte Rancheon, of Pompey, Onondaga county, New York, by whom he had seven children, Nelson being the third son and fourth child. Mrs. Charlotte Fisher was born in Connecticut, November 16th, 1775. Her father died when she was very young, and she, with hermother, moved to Onondaga county, New York. She died in Harmony, New York, November 1st, 1838.

I too am looking for the connection of Joel Fisher to Jacob and Sarah Fisher. I found some thing interesting in the "The Fisher Genealogy Record Of the Descendants of Joshua, Anthony, and Cornelius Fisher, Massachusetts Publishing 1898" where a mention is made to children born in Sharon Mass. to Jacob Fisher. Spencer b. 1778 and Joel b. 1780 seem to be missing from this account. 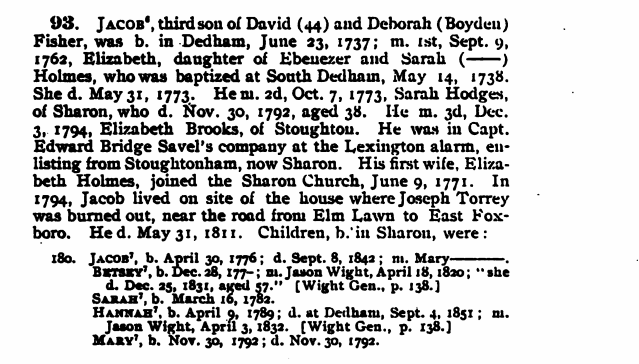 8
Finding baptism record near Marystow, Devon, for Harriet Palmer in about 1770?
3
Who were the parents of the Anna who married Elisha Strong?
1
Could Francis Tolvert Greenway baptised 1774 at Falmouth be Francis Green who married Grace Woodley 1798 at Totnes?
9
Using shared cM to determine likelihood of misattributed paternity?
5
I'm a 2nd cousin to someone, my brother is a distant cousin?
5
Using "shared DNA" column in 23andme for triangulation?
4
Was Daniel Rich (Jr.?) the grandson of Jacob Rich? Or, the confusing case of Daniel Rich (Sr.?) and Nancy Marshall