What can I deduce if a grave is re-used?

DeceasedOnline (a database of UK burials and cremations) shows that my ancestor Ellen Wright (née Brown) was buried in Cheshunt Cemetery Hertfordshire in 1871, in grave reference 37AQ.

In February and March 1917, the same database records that two further infant burials took place in the same grave; I haven't been able to discover a family link to either of them.

What does this reuse of the grave tell me? 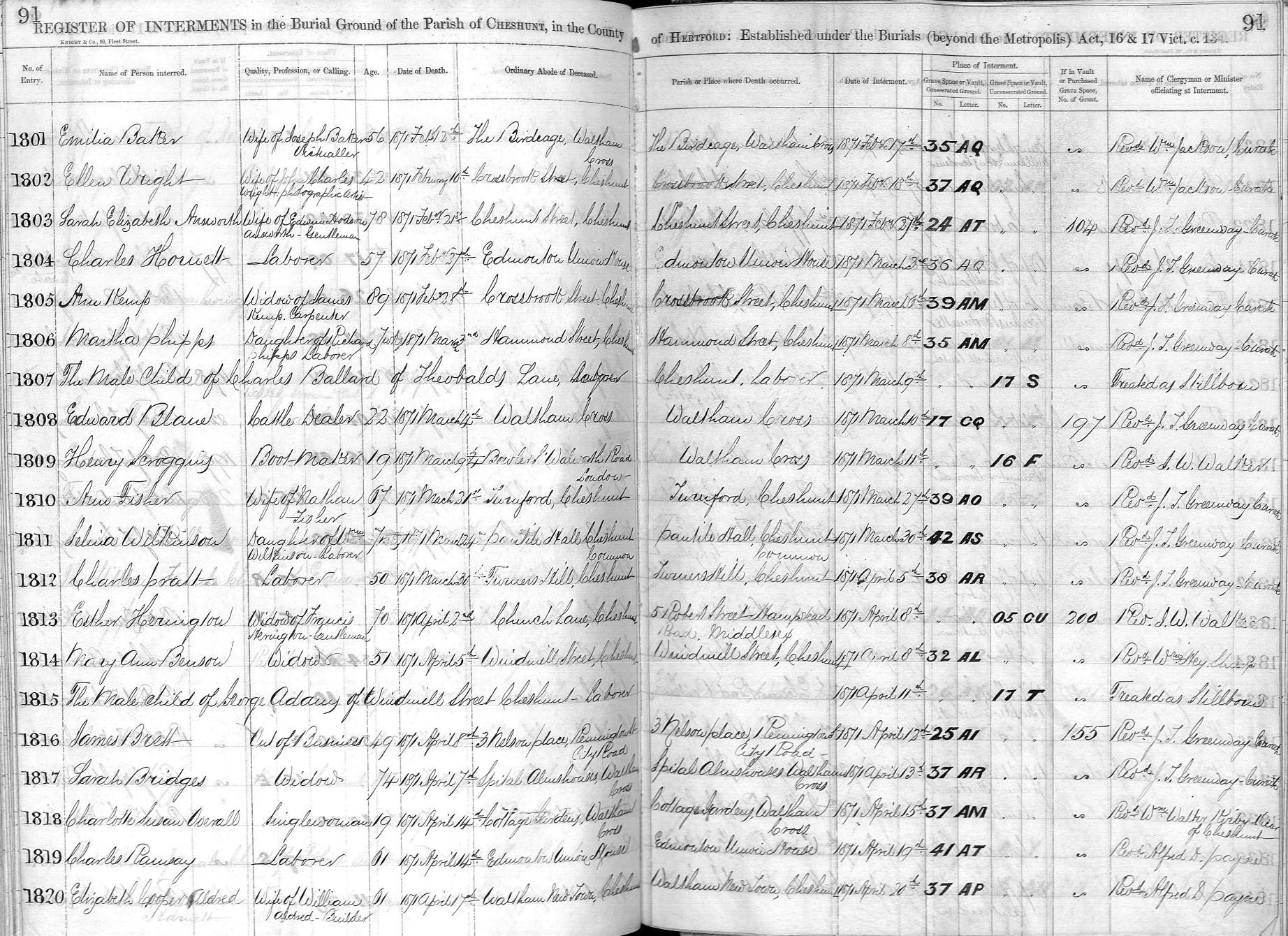 My initial suggestion would be that this is a "public" grave, i.e. one to which the right of burial was not owned by an individual but by the council.

Having said that, if you see nothing between 1871 and 1917, this seems an unlikely explanation as I would have thought a public grave would have been used for subsequent burials soon after the 1871 burial. Unless 37AQ is just a sub-plot within a big public plot that simply never got opened up again.

I've been trying to understand what the legal situation is with re-use in cemeteries - and that appears an unlikely explanation also! See this comment about re-use, which says "In London, local authorities have powers to reclaim a grave that has not been used for at least seventy five years, and use any space in the grave in which no interment has taken place" (my italics).

Looking at the pair of pages from the register, I believe that the explanation of what is probably (but not certainly) going on lies in the next to last column headed "If in Vault or Purchased Grave Space, No. of Grant". The 37AQ line in 1871 has no entry in that column. Therefore (setting aside the vault possibility, because @ColeValleyGirl says, from her visit, that it's a normal plot) the register indicates that this Grave Space (i.e. this plot) has not been purchased. So the council retained the right to use the plot again for another burial - which, in 1917, they exercised.

I have an inkling that in previous discussions in other places, I have seen suggestions that babies could be buried in convenient other graves. That seems to be the case here - they used a grave with room in it, to which they (the council) had the burial rights, and which had not been used for burial for 40-odd years. At least that way, the grieving parents were saved the expense of purchasing a plot.

In relation to my attempts just above to understand the legal situation with re-use - that situation does not apply, as re-use in that context must apply to grave plots where the right of burial is owned by someone other than the council concerned.

Caveat: My suggestions here are based purely on logic, not direct knowledge. This raises various questions such as

The Cheshunt Cemetery description at Find-a-grave states that

"The cemetery contains around 15,200 graves with 26,000 interments. The cemetery is maintained by Broxbourne Services, the Council's in-house contractor, ..."

Clearly, many graves have multiple interments. It should be possible to query Broxbourne Services on the cemetery's definition of a plot (single, double) and the policies for plot ownership and transfer, and if these have changed since the earlier burials. Some possibilities: multiple sub-plots, the plot's owner authorized the infant burials, or somehow ownership lapsed or was transferred.

One unfortunate possibility is that the register entries made in 1917 are erroneous. Your comment on another answer that most burials at that time were happening in a different part of the cemetery could mean that the two infants in question were also buried somewhere else and that an incorrect plot number was entered into the records.

There is a very real possibility that the cemetery was operating on a reduced complement of staff in 1917 and that those who were employed there were not experienced or well-qualified. When tempted to devise elaborate explanations for strange events, one should never rule out simple incompetence.

7
How might a “nurse-child” have been placed with their carers?
8
How can I assess the statistical probability that an individual is the one I seek?
10
Did 19th century English women sometimes change the first name they used?
14
What records might be created in England when people are re-interred?
8
Finding an elusive ancestor after the 1901 census (who may have deserted his family)
4
Resources for researching family from Greene County, Tennessee?
7
Formulating a strategy to locate a marriage
2
What newspapers/magazines would people have used in Solloghodmore Ireland around 1850?
6
What can I deduce from this newspaper extract?
14
What could explain that somebody is buried half a year after dying?