What is the significance of the character "j" at the end of a Roman Numeral?

While using an old (1907) book of transcriptions (on-line) The Parish Register of Gargrave in the County of York , I was puzzled by the number of dates recorded in the 16th and early 17th centuries that could be read easily as Roman numerals except for the addition of a j at the end. 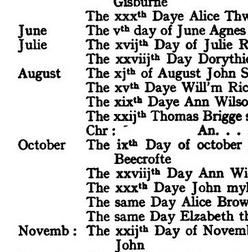 The pattern (if there is one) seems to be that if the number would ordinarily end with i then j is appended, but if it ends with v or x then there may be no extra character before the ordinal superscript (but in one case, there is!).

I thought this may be a style quirk of a particular clerk, but now I am seeing it in other sources (but all Yorkshire based and pre-1700, because that is what I am reading at the moment).

The letter j originated as a "swash" (florish) character at the end of Roman numerals, and only later became useful as a separate character.

A j was used for the final i, to make it clear the number had ended.

Until quite recent times it was still the recommended practice to use a final j in medical prescriptions, to avoid misunderstandings. See these instructions from 1919: 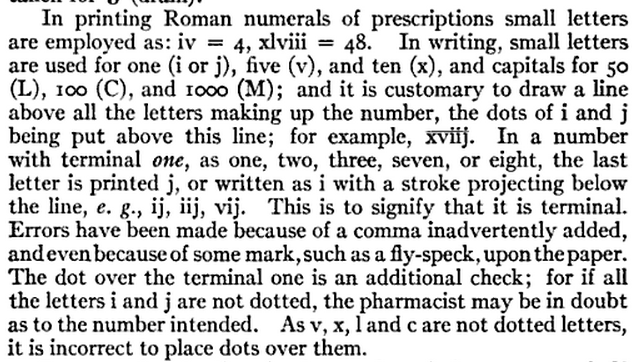 So you should interpret xvij as 17, not 16. It's part of the number, not something appended.

Not the answer you're looking for? Browse other questions tagged england 17th-century date or ask your own question.

10
What is a "double date"?
6
The vicar didn't record the baptised child's name! Now what?
5
Interpreting names and abbreviations at the end of wills?
10
What was the weather like?
6
Was the 1939 Register really updated after the end of National Registration?
6
What are the dates on these documents?
5
What is the first word in this baptism record?
5
Should the GRO Birth Index year be entered as birth year?
8
What does "living 15 Rich. II" mean for the year an ancestor was alive in England?
6
How did two birth records from the same sub-district end up in different districts?