How can I find a female Danish immigrant's name prior to her marriage?

My GrF Joseph Conrad Kaiser b May 19, 1889 Chicago, Illinois married Anna on Dec. 1912 in Illinois. The info I found shows her last name was "Milling" when they married. I would love a copy of this certificate.

My question: I want to track down her other last (married ?) name: "Milling" perhaps mis spelled. Was she married in Denmark before immigrating or married in USA.?? Who was she married to? any children from that spouse?

FYI - Access to the Cook County collections was removed in 2013, because of contract changes. The images I downloaded before that from the marriage collection were all marriage licenses, with little more information than the index.

Images for the "Illinois, Cook County Marriages, 1871-1920" collection can now be accessed by ordering the microfilm, ordering from Cook County or requesting a digital copy from the Family History Library. These options are more fully described under "Image Visibility"

You apparently have her maiden name and birth date and place. Have you found her in U.S. census records, before and after 1912? What do these say about when she immigrated / naturalized / first married ? Can a timeline be developed as to whether she was already married when she arrived in the U.S. ? This information may help you find her passenger list. Have you checked for her and her family in Danish records? (Not my area of expertise, but others have had success with the online records, keeping in mind that many Danish surnames were patronymic).

First, you need to know if she was married before or after immigration.

Since you know the date of her second marriage in the US, you should look for US Census records around that time. My great grandfather was a Danish immigrant, and on the 1900 US census, there's a column indicating the year of immigration: 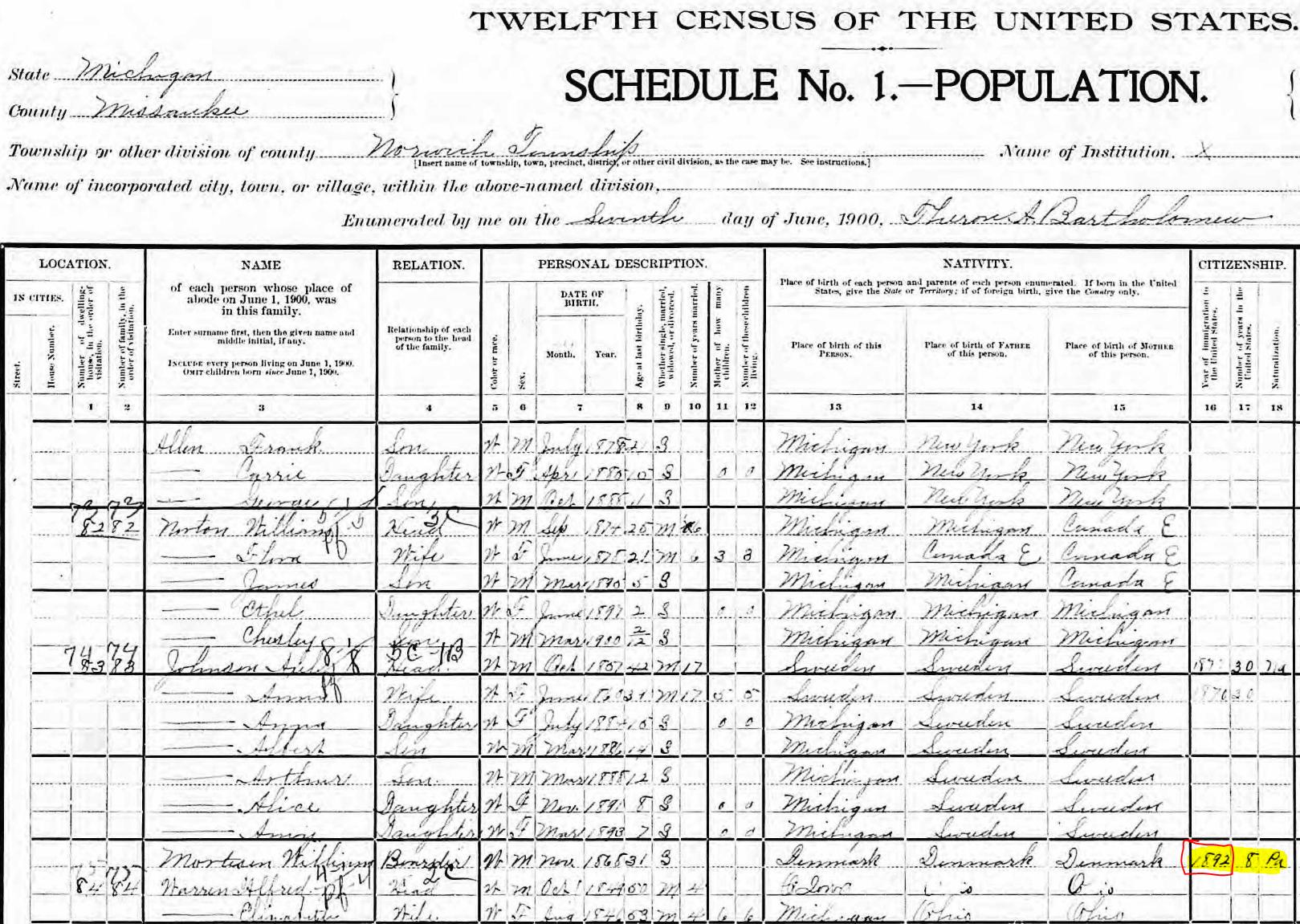 In his case, it says 1892. You can then search The Danish Emigrant Archive to see if records of a person with the same name leaving the country exist.

To use my great grandfather as an example, I was able to confirm that someone with his name left in 1892 by searching that database. It also says his destination was Detroit, Michigan. He lived in Michigan, so there's the double confirmation.

Note: My great grandfather had a drastic name change between Denmark and the US. "Lars Jørgen Vilhelm Mortensen" changed to "William Mortensen", how I figured that out is beyond the scope of this question. Knowing his Danish name was a prerequisite to use this database.

So, here's the good news! "Milling" is not a Danish surname, so it's very likely that you won't encounter the typical clutter of people with the same name if she was already a Milling when she left Denmark.

Since her last name is so uncommon for Denmark, the whole US-census-checking step is unnecessary in this particular case. 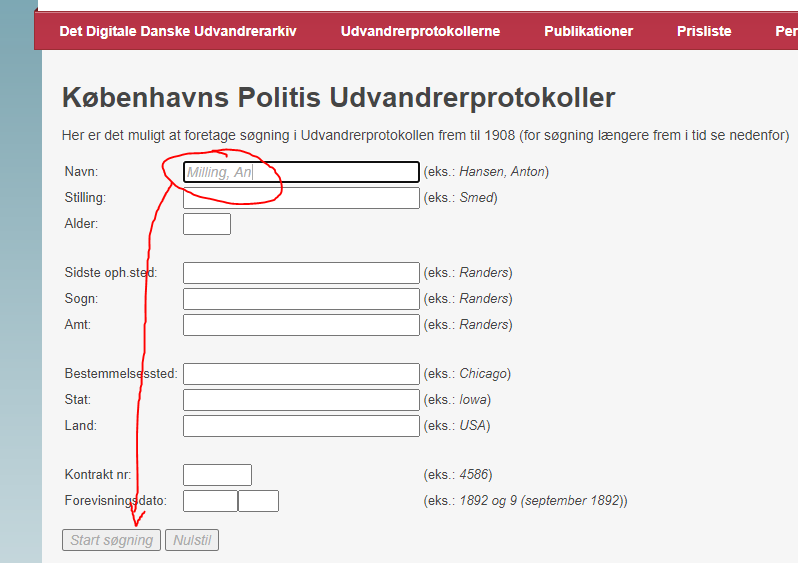 Simply searching "Milling, An" returns this. You can see if you do the math on the presentation date and age, you are within +/- 1 year of the birth date you have in your question. Also she is headed to Illinois where you know she married/lived in the US. Based on that, I suspect this is her record of departure from Denmark: 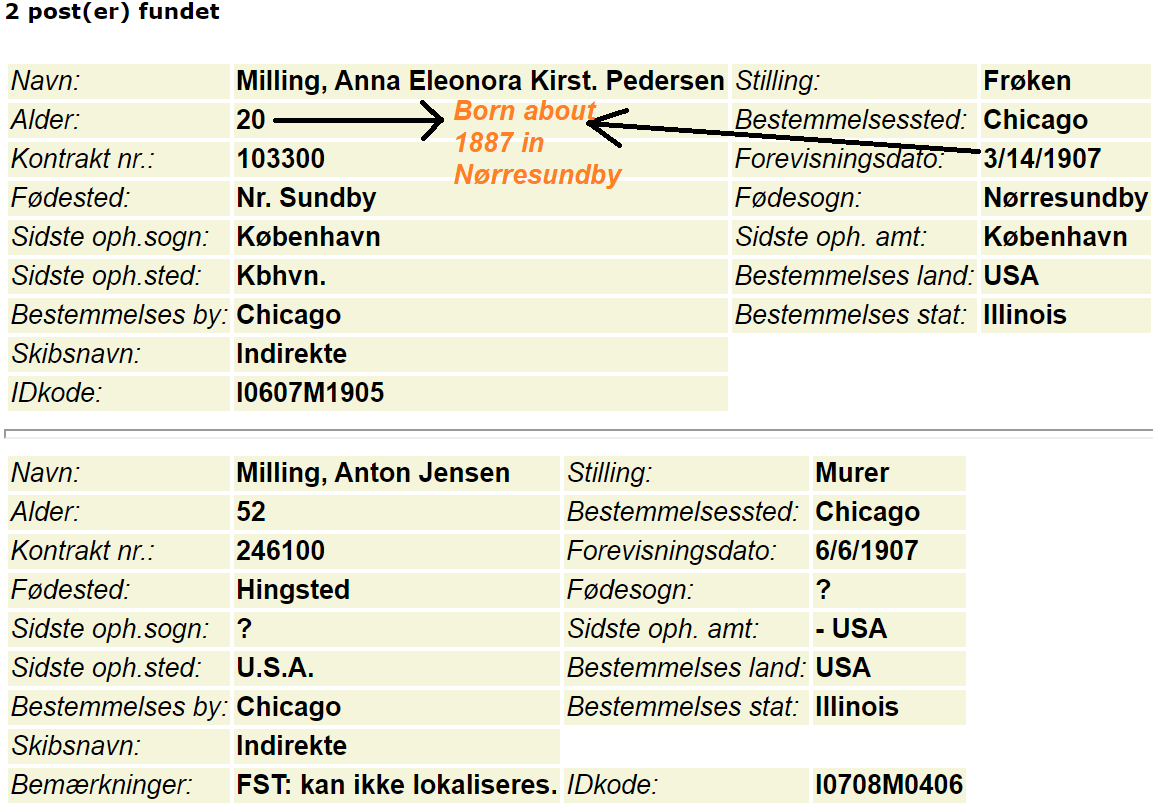 So, the "Anton Milling" record that came up is a coincidence, but I checked all "Millings" leaving Denmark in 1907 and they are the only two. Maybe they are connected? They both left Denmark to both go to Chicago the same year. Coincidence? Maybe. However, if you look at the birth locations for them, he is born a short distance south of Nørresundby where Anna was born. So I would make a note of this man and put it in my back pocket for later. 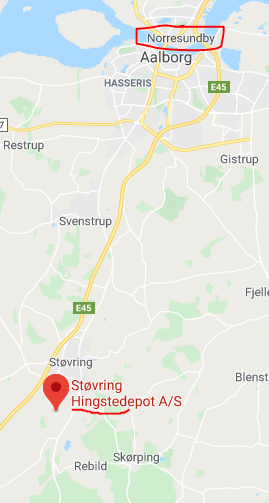 Now that you're equipped with her...

I would search for records around Ålborg/Nørresundby for more info.

Still not convinced this is her? Okay, so now that there's a sturdy hunch that she left Denmark as a Milling, let's look for a US census record to corroborate a 1907 immigration... I searched Familysearch.org for Anna Milling. There's a 1910 census from Illinois with a Danish woman named "Annie C Milling" - Americanization of names is extremely common. That census indicates an immigration year in the same manner as the 1900 US census for my great grandfather. Side note - this census says she is single.

Guess what? It says 1907. It also says she is 22 years old, which closely agrees with a 1887 birth date. It also appears to indicate that both of her parents were born in Denmark. - This is useful. 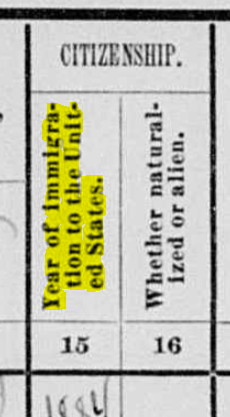 Okay, so now you have a double confirmation that the woman leaving Denmark in 1907 is her. To find her Danish records, you'll need to use the Danish version of her name. You seem to believe she was married twice, so let's fix the name:

Another FamilySearch.org record search for this name without Milling yields an 1890 Danish Census for a Nørresundby-born "Ane Eleonora Kristine Pedersen" living in Ålborg, Denmark. 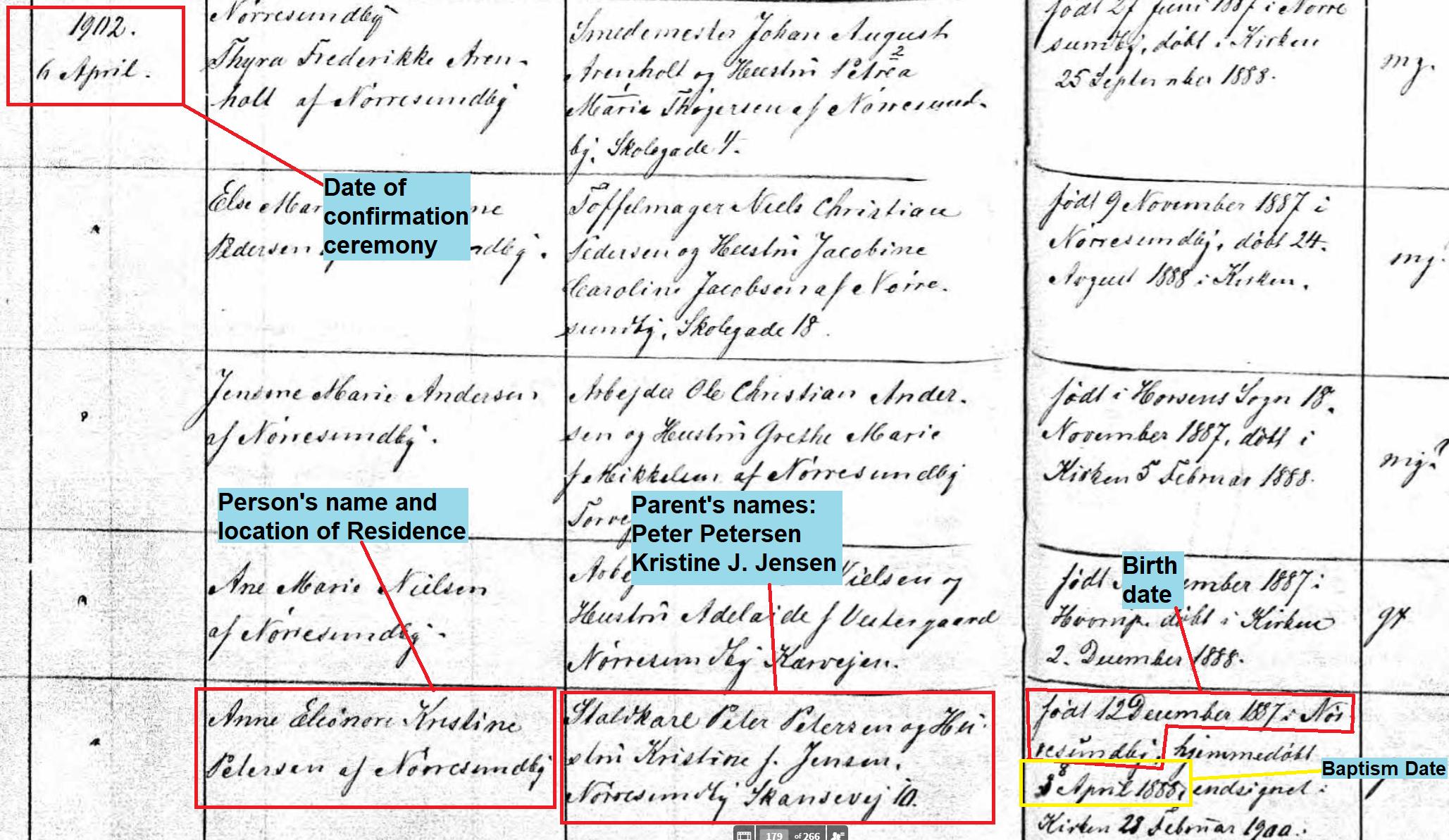 Additionally, I found the actual birth/baptism record itself, which confirms the birth date of December 12, 1887 as well. That is actually an even closer match to the emigration record above in which my math yielded 1887 as her birth date.

Anyway, to keep it on topic, you want to know when she married the first time.

Unfortunately, that's where the paperwork dries up. One thing I can say, since we know her confirmation was in 1902 and she left Denmark as a Milling in 1907 the marriage happened between 1902 and 1907 since they did not typically get married prior to confirmation. I don't want to speculate about why she was single 3 years after leaving Denmark if she was married in 1907. Another option might be to seek a US divorce record between 1907 and 1910.

To summarize your questions:

According to the emigration record, this is the correct spelling.

She appears to have emigrated (left) Denmark as a Milling, so if this is a married name, then she was married in Denmark between 1902 and 1907.

I am unable to find any information to confirm

Again, unable to confirm 100%. Probably not though because she wouldn't have left small children (<5 years old) in Denmark and have gone to the US alone and been single (per the 1910 census).

A final note of pure speculation. Anton Milling, who I stumbled across in the emigrant database has records of him passing through Vermont on the way to Chicago. The notes say he is going to meet his, "friend, Christen Petersen".

Could "Christen Petersen" be referring to "Anna Eleonora Kirstine Pedersen"? Maybe he was just her boyfriend? Maybe he was just a friend and they lied about being married to help her immigrate somehow? Another possibility is that he was some sort of legal guardian or adoptive father.

Remember, she left a few months before him, so that would add up that he would be on his way to her and not the other way around if they did know each other.

The passenger list from Vermont says "Friend Christen Petersen, 650 Clairemont (or Claremont) Ave." If you can confirm whether Anne lived at a 650 Clairemont (or similar) address, I think you can safely assume this man would be her first husband.

If you have doubts about Americanization of names. Remember, my great grandfather went from.

He immigrated at the age of 24 and lived to be 84. Over those 60 years, only one lone us-based document used the name "Lars" after he left Denmark. Jørgen was to never be seen again, and Vilhelm was always written as William.

Good luck in your searches.

Danish emigration records can be a good way of tracking Danish emigrants, particularly where you haven't been able to find them entering the US or don't know which route they took to get there: http://www.emiarch.dk/search.php?l=en

Find her by searching for "Milling, Anna". She emigrated in 1907. Her full name is given as "Milling, Anna Eleonora Kirst. Pedersen", born Nr. Sundby (Nørresundby, near Flauenskjold), and she was heading to Illinois. She was single (shown by the "occupation" of Frøken).

While destination is not mentioned directly on the emigration database, given the same details it is relatively easy to spot her as "Anna K P Milling" on the Boston incoming passenger lists (link to record on familysearch). This shows her contact in the US as her father, Anton Milling, in Chicago - he had emigrated the same year and can be seen on the Denmark emigration database, although his shipping route went via Canada.

http://www.danishfamilysearch.dk/search It seems Anton Jensen Milling did not stay in the US - he can be seen here in both the 1901 and 1916 censuses, "divorced".

In Danish records, it's not unusual to see both a patronymic "Pedersen", "Jensen", and an additional surname (taken from the family farm, for example), used in one direction or another. What is a little strange here is the "Pedersen" - this usually would indicate that either her father was, e.g. Anton Pedersen, and she took the patronymic directly, or that his first name was "Peder" and she took "Pedersen", but "Anton Jensen Milling"

Examination of the parish records relating to her baptism and confirmation should help clear this confusion up.

Not the answer you're looking for? Browse other questions tagged united-states immigration denmark or ask your own question.

9
Where can I find more information on Danish 16th century priests?
9
How can I find out the name of this street?
14
Locating New England telegraph man (Lemuel Keyser Preston) ca1850?
8
How to find Indentured Servants in Buffalo, NY or Canada?
6
How to find death record from late 19th century New York (State)?
0
How can I read and interpret old Danish script?
3
Who were the parents of the Anna who married Elisha Strong?
3
How can I find information on a nineteenth century marriage in Denmark?
0
How to help adoptee find her father without outing him?
3
How can I find the images where the data was sourced for the 'Germans to America, 1850-1897' database?