I am finding it very difficult to read and translate the writing on this page. Although the parish is in Finland, the months are written in Swedish. I cannot read the headings along the top of the page and I am not sure if the body of the text is also written in Swedish or Finnish. Kasia is supposed to have been born in Kemi on June 15th; I can see "Juni" and I can see "15", but what does the number 18 refer to? Also, what do the numbers along the right-hand columns refer to?

From what I can decipher, the text reads:

There are so many names in here, which ones are the parents? Are the others witnesses or grandparents?

Also, Kaisa married Matti Laho, B: 13 MAR 1853, D: 6 NOV 1901. I am finding this record even harder to read that the previous one. I think that I can see "Laho" in there, but maybe it is just wishful thinking? The date is right. I'm not certain that he was born in Kemi, but it would make sense given that they eventually married. Can anyone decipher this? I have linked both individuals to the digital scans of the records held by The National Archives Service of Finland so that you can see the full page of handwriting.

I would read Kaisa's birth record as

The text is in Swedish as was common in Finland up to about 1880. Some explanations:

PolyGeo is correct about the number 18 - it is the baptism date, i.e. 18th of June (not May, since the heading on same page says June). And the name is Kaisa/Caisa/Kaisa, not "Kasia".

The numbers on the right are probably the amounts they had to pay for the baptism. The first page in the book http://digi.narc.fi/digi/view.ka?kuid=7833827 contains the headings "Fattiga" and "Lazarett", meaning "The poor" and "The hospital". Apparently this was a way to collect funds for the welfare at that time...

The last name (Leinos) is not certain. The word "pig" (maid, unmarried woman) is also not clear.

I think I can answer one part of your question which is what the number "18" after "15" refers to. I think it is born on the 15th and baptised on the 18th. That this might be the case is based on the second number for other individuals on the two pages being always slightly larger (later in the month) except two. I have included a picture of the first exception below. 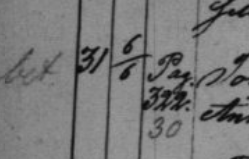 I read this one from the left hand page as meaning born 31st (of May) and baptised 6th June.

These are the conclusions of an English speaker so no account has been taken of the Finnish or Swedish languages.

Not the answer you're looking for? Browse other questions tagged palaeography sweden translation finland 1850s or ask your own question.

22
What does three small rings in a triangle mean in a Swedish parish registers?
4
Who officiated at this baptism? (need help with handwriting)
4
How to read Swiss Church Book / Kirchenbücher Collection Indexes?
6
Reading a Canadian 'Oceans Arrival' form completed in 1924
1
Reading first name for Samples surname in Virginia Tax records of 1806?
1
Reading Austrian public record?
5
Interpreting (yet another) 17th century German church record?
6
Reading church name in Gaelic on Marriage Certificate
4
Who did Emerich Braunschweig marry?
3
How can I verify if Kilbirnie is in the Dalry parish in Scotland?