Tracing Hitchcox migration Liverpool-Adelaide in 1854 on ships Constance and Antelope?

My ancestors Thomas and Jane (nee Anslow) Hitchcox, aged 56 and 57 respectively, immigrated to South Australia in late 1854 with six offspring:

The front cover of a book entitled "The Hitchcox Family from Wheaton Aston to Adelaide and a Pugnacious Apothecary" by Josephine Prescott, with additional material collected and inserted by Robert Brown, with assistance of family members, states that:

They boarded the Antelope, which left from Liverpool on June 6 1854, and arrived in Adelaide on December 21, 1854.

Inside that book on p.44 it states that:

the Antelope had sailed from Liverpool, carrying Thomas Hitchcox, his wife Jane, and all his children except Alithea and her family. The ship called first at Sydney and Melbourne and arrived in Adelaide on Thursday December 21, 1854.

The book appears to be a very well researched family history, with lots of personal letters and newspaper articles from around the time and yet I think the reference to the Antelope carrying them from Liverpool to Adelaide is wrong!

The Victoria, Australia, Assisted and Unassisted Passenger Lists, 1839–1923 on Ancestry.com records that Thomas Hitchcox and his family departed Liverpool and arrived in Melbourne during December 1854 on the Constance!

Below are two images from the Passenger List of the Constance which is dated 30 Aug 1854, and says that it is bound for Melbourne. Where this document was completed is not clear to me. 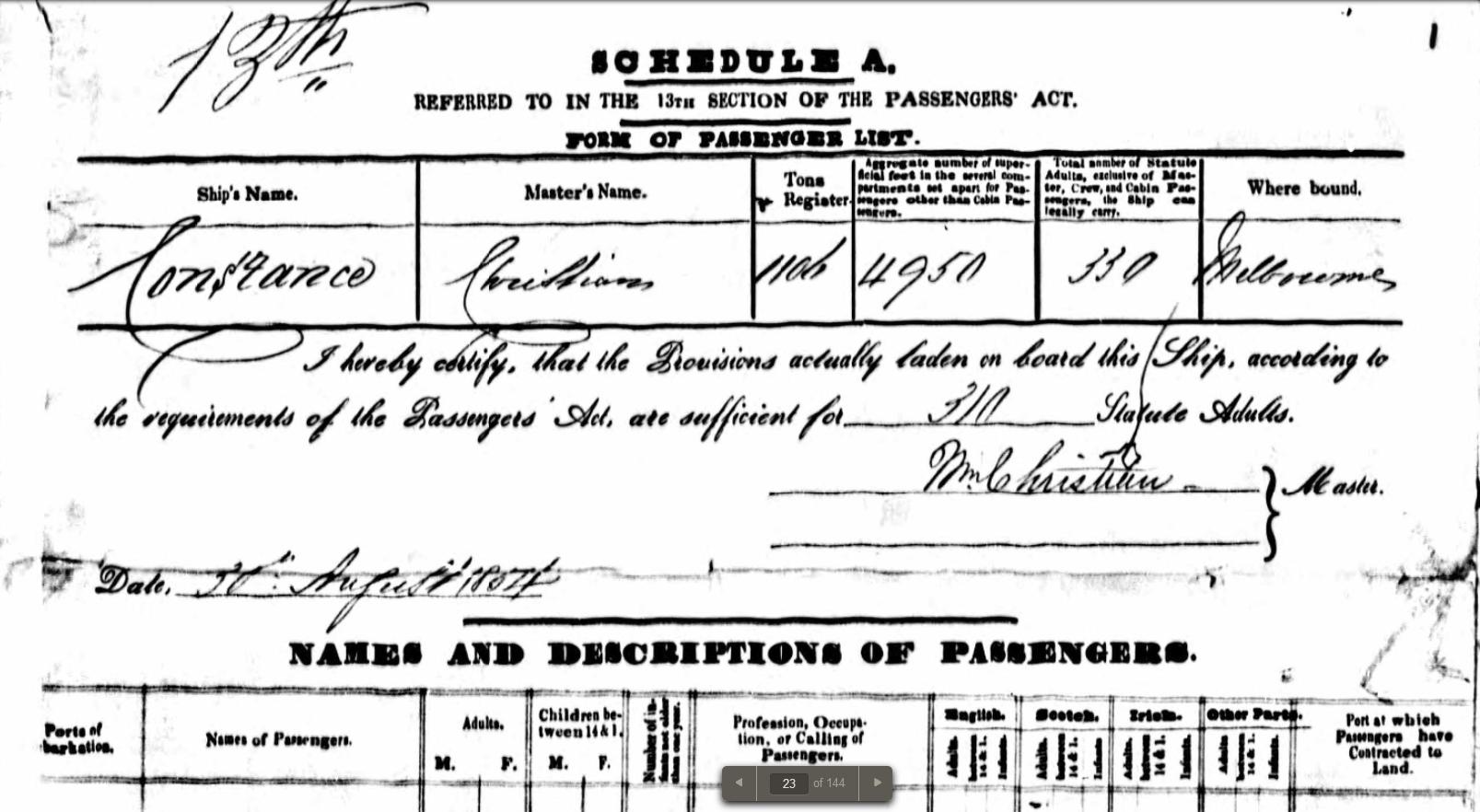 Consequently, I am confident that the Hitchcox family did arrive in Melbourne aboard the Constance but I have much confusion about the role the Antelope played in their emigration/immigration. Some thoughts I have are:

Does anyone know how I could learn more about the Antelope and its movements in the second half of 1854?

The Antelope does appear to have been in Australian waters in late 1853 (Dead Persons' Society of Perth, Western Australia: Passenger Ships into South Australia) and very early 1854 (Mary-Anne Warner, Mariners and ships in Australian Waters).

To gather more information about the operations of ships, establish their identity, just as you would for a person, and about the company which operated them. With ships, just like people, there can be more than one with the same name. You might search for the shipbuilder, the Master's name, the company who operated the ship, or the owner's name. All might yield different results, depending on what information was in the original documents.

One possible line of inquiry is suggested by this posting from the RootsWeb Mailing list CORNISH-GEN-L, a transcription from the West Briton Friday 25th February, 1853:

For Melbourne, Port Phillip, the splendid new clipper-built ship MILES BARTON, William KELLY, Commander; A1 at Lloyds, 1,500 tons burthen. This superb ship has been built, regardless of expense, expressly for the Australian trade, by the well-known builders of the celebrated ship "Constance." She is expected to prove the fastest vessel afloat. Her cabins are fitted up in a most superior manner. The between-decks are extremely lofty, and ventilated on the most improved principles. The "Miles Barton" is a single-decked ship, and has an unusually clear upper deck for the passengers to take exercise on, and which has been proved to be absolutely essential to health on so long a voyage. The fittings will be found to be of a novel and superior description, and baths are provided on deck for the passengers. The dietary is extremely liberal and great care will be used in the selection of the provisions. She will carry an experienced Surgeon. Apply to MILLERS and THOMPSON, 4 Tower Buildings West, Liverpool. The Steam-ship "Antelope," will sail on the 5th of March, in connexion with the above line.

There was another inquiry about the Golden Line on the RootsWeb Mailing list MARINERS-L from a user who was researching the Miles Barton:

Does sks have any information about the Liverpool "Golden Line" of Australian packets, as noted below in the sample classified ads from the London Times for 1854 & 1856? Were Pilkington & Wilson, who were, I believe, the principals behind the start-up of the White Star Line, the owners of the Golden Line in 1854?

No one replied to his query, but in his post he gave his source for the newspaper listings as the Thomson Gale Digital Times database. His link is broken -- this appears to be the current location for the London Times Archive at Gale.

If the Antelope which arrived in December 1854 is one of these three, then it must be the first one (since the other two haven't been built yet). This seems to be the steamer which is referenced on the Ozships site. However, there is at least one other ship on OzShips with the same name, so it's not safe to assume that any listing of the ship Antelope is this one.

To quote again the passage from the history book:

It is a good question to ask whether there is an arrival for The Antelope in Adelaide on 21 Dec 1854 and whether it actually left Liverpool on 6 June 1854. If you can find a passenger list, a brute-force walk-through might find evidence that is useful to you, e.g. lined-out entries that indicated your family intended to sail on this voyage but didn't actually board.

Also, this may be less common for travel to Australia, but on the Trans-Atlantic routes, it was common for families to travel back and forth several times. The information which came down in my family listed both ships but the arrival dates were not accurate. Is it possible that some member of the family had more than one arrival, either before or after this voyage of the Constance, and the Antelope was involved?

The Public Record Office Victoria has a searchable Index to Outward Passengers to Interstate, UK, NZ and Foreign Ports 1852-1923; searching for the Antelope and Dec 1854 results in 122 records matched with passengers bound for Liverpool. See their guide for links to other digitised records and online indexes.

Many sites or record collections do not list interstate or intrastate departures, so your best bet may lie in searching newspaper archives e.g. on Trove.

Another approach would be to study the operations of Melbourne as a port, to see if people commonly transferred from one ship to another. This overview of the history of shipping in Melbourne, published by School of Historical Studies, Department of History, The University of Melbourne, gives context and includes some information about transit times.

At the time of this writing, these sites yielded no results, but the links are included for future reference:

Disambiguation: see the section on ships in the article Antelope (disambiguation) which includes many other ships, including the Antelope of Boston -- none of the ships in that article are the ship Antelope you are looking for, nor does it appear to have the three ships listed at Warren's blog. A search of the ISTG will turn up these other ships, especially the earlier packet ship Antelope which was lost in 1794.

I have found the following information about the Ship Constance and also the Antelope. As I can see it this will tie in all your information and solve some of your problems.

The scan you have of the 'Constance' probably is when it arrived in Boston from Liverpool. The paper information can be found on the Trove website for Australian Newspapers http://trove.nla.gov.au/

The answer from @JanMurphy stimulated me to look harder, and provided some pointers in which direction to proceed. By doing that I found: 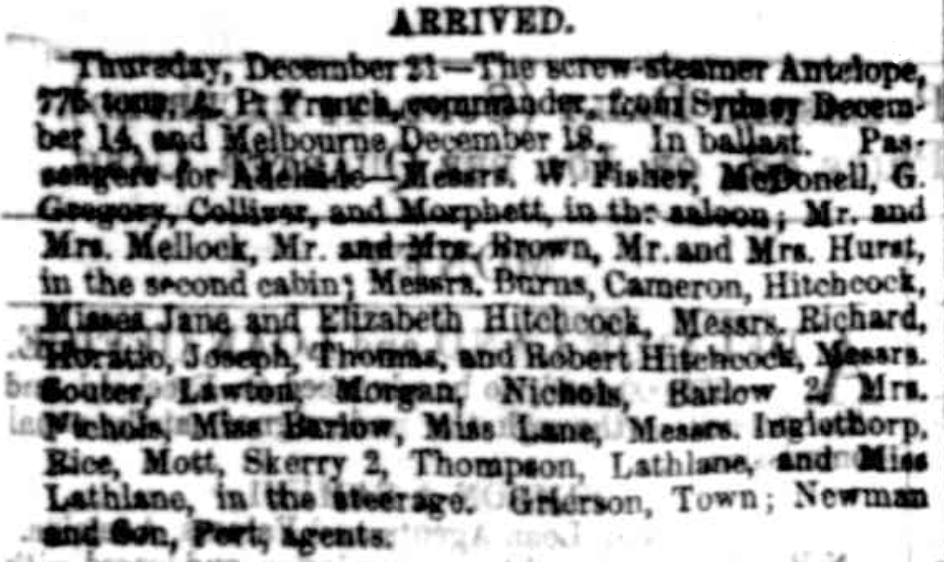 What I now think happened is:

The main remaining discrepancy seems to be why is the date they left Liverpool recorded in the book as 6 Jun 1854 when the Passenger List for the Constance has a more likely date (based on expected voyage duration) of 30 Aug 1854 recorded on it.

The last discrepancy has just been cleared up. A re-read of two of the letters in the aforementioned book, both written by Thomas Hitchcox from his home in Wheaton Aston, Staffordshire, to his eldest son William (who had gone to live in South Australia three and a half years earlier) when discussing their upcoming voyage say:

I think it extremely unlikely that they would be boarding a ship to Australia six days after writing the second of the above letters, and a departure date of 30 Aug 1854 looks to fit the plan Thomas had both at the beginning of April and at the end of May 1854.

I am now confident that they did not leave Liverpool aboard the Antelope on 6 Jun 1854, and with that "fact" discounted, the remainder of the timeline I have assembled for their migration now seems to fit.

An earlier letter on 28 Sep 1853 made no mention of the family going to Adelaide, although it did say:

We have heard of many lately being gone to Australia.

One last footnote to this story is that the Antelope was certainly not in Liverpool on 6 Jun 1854 because a website of Mariners and ships in Australian waters records a ship with the same name, master and tonnage, travelling from Melbourne to Sydney only a fortnight later:

FROM THE PORT OF MELBOURNE TO SYDNEY, NEW SOUTH WALES, 19TH JUNE 1854

Not the answer you're looking for? Browse other questions tagged england australia ship 1850s or ask your own question.

2
Where was Joseph Brown Lever for 1841 England Census?

11
Who built the SS Persia in Quebec in 1853?
6
Finding record of under age World War I enlistment in South Australia?
5
What churches in/near Ward 6, Albany, New York State might have baptized Scottish baby in 1854?
1
Determining location/address of Robert John Steven Sellers in 1900 from Sands and Macdougall Directory for South Australia?
2
Where was Joseph Brown Lever for 1841 England Census?
2
Are South Australian Miners expected to appear in Boothby and later directories?
5
Identifying Australian soldier named Williams in World War I photograph (1917)?
5
Identifying Australian soldier named Bennett in World War I photograph (1917)?
1
Tracing police service of South Australian constable from 1855 to 1861?
1
Is Saisy a known 19th century Irish/English nickname for Sarah?