When, where and to whom was William Henry Rouse born in about 1832 near Truro (or Redruth), Cornwall?

On their Marriage Certificate the Age for both of them appears to say Major, which I assume to mean over 21. From this I deduce that William Henry Rouse was born no later than about 1832. 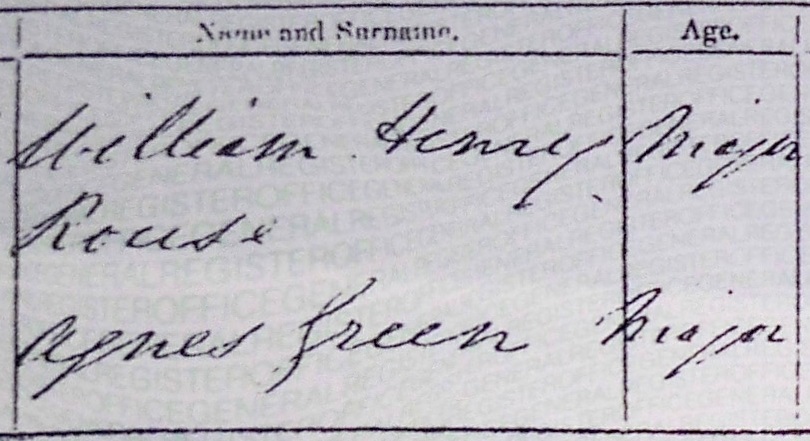 On the Marriage Certificate William Henry Rouse's occupation was Clerk and his father, called William Rouse, had the occupation of Plasterer.

When he died of tuberculosis on 8 Feb 1887 at Adelaide, South Australia, the age given on his death notice was 49 years. If correct, this would mean he was born in about 1838.

Other clues to his birth year come from:

I think there are two candidates for him in the 1841 Census:

Almost all of the evidence above points to a birth date about 1832-33 and is at odds with the age given at death many years later in another country (1838).

My theory is that William Henry Rouse was the grandson of "Kitty" Rouse, and possibly/probably the illegitimate son of William Crossman Rouse (born 5 Sep 1813, christened 26 Sep 1813; a Plasterer from multiple Census Records). William Crossman Rouse married Eliza Reed on 25 Jun 1838 at St Day, Cornwall and had nine children including another William Rouse in 1841.

This is a long story cut a bit short, but if I were to find either of the two vital records below then I am sure that they would shed some more light on what actually happened:

Does anyone have any thoughts on where else I might be able to look for them?

To look hard and not find them I think makes my theory a little harder to disprove.

I've looked unsuccessfully for whether the birth of William Henry Rouse may resulted in a paternity bond. An interesting aside is that the grandfather of William Crossman Rouse, Edmund Rouse paid a paternity bond in 1785 at St Clements when his son George fathered an illegitimate child of Jenefer Webb.

In the 1851 Census there is a William Rouse aged 18 living with his brother-in-law's family.

This would make him Elizabeth's brother.

Kitty Rouse is the right age to be Christian Crossman who married Edmund Rouse in 1801.

william Henry's marriage certificate to Agnes Green in 1853 states his father as being William Rouse a plasterer. William Crossman Rouse was a plasterer by trade.

So although the evidence is circumstantial I would take all the bits added together and think that the probability is there.

Another set of evidence that reinforces that William Henry Rouse may have been the son of William Crossman Rouse came from http://www.familyhistorysa.info/:

The 1878 Boothby Directory has William Rouse (a Mason) living in Stafford Street.

William Rouse, the Mason, appears to be William Henry Rouse's half-brother William (William Crossman's first son to be born within wedlock), a Mason from Redruth (Cornwall) who immigrated to Port Adelaide with his wife Elizabeth Jane aboard the Clara in 1865.

This William Rouse was:

My hunch for why William Crossman Rouse may have had two sons named William is that the Reed family, into which he married, may not have known about the first William (William Henry) until some time after the baptism of the second William.

Not the answer you're looking for? Browse other questions tagged cornwall baptism-records 1830s or ask your own question.

2
Finding death/burial record for Christian "Kitty" Rouse after 1851 Census in Truro, Cornwall
4
What can I infer about John Wright from this 1841 census entry?