Identifying photograph which may be Margaret Morgan (1808-1902) taken at Bridgend, Glamorgan, Wales?

Below is a photograph (I apologize for the quality; it is not in my possession to re-scan) of a woman who I think could be my 3rd great grandmother Margaret Morgan who was: 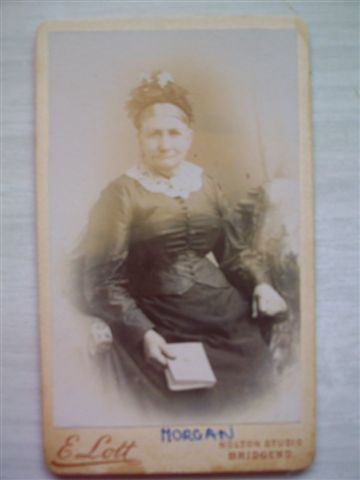 The word Morgan has been written on both sides of the photograph, I think by my great uncle Thomas Chedester Browning (born 1904; who was Margaret's great grandson) in Australia around the early 1970s. 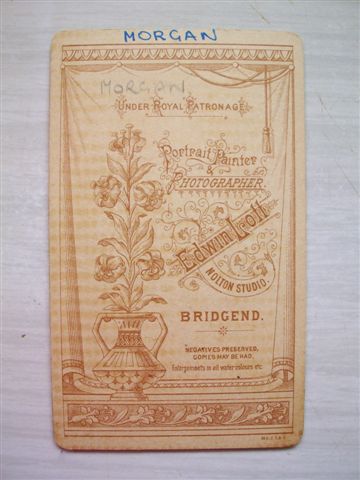 The photographer is Edwin Lott and he labelled like this:

Let’s say she is 75 years old which means that I am looking for a Morgan lady born about 1820.

Almost all the records I have from Bridgend are Thomas and Margaret Morgan’s family so she and her daughters seem the best candidates.

I think the photograph may be Margaret Morgan (1808-1902) but can anyone see anything in the photo and my logic above that would seem to support/refute that tentative identification?

The tight hair and tight button-down clothing make me think pre-1890. There was a rage of puffy shoulders and sleeves that began around 1895 and became outlandish by 1905.

Subject appears to be between 65 and 80. Her crooked smile may indicate some worn or missing teeth. :)

Probably a widow, since she is aged and posing alone.

She may be holding the secret of her identity in her hand. She appears to have her finger inside it (???), which would make it too thin to be a bible.

First Communicants pose with a bible, graduates hold a scroll, engaged and widowed women hold a photo of their beloved. What life event is she posing for? Perhaps there were no photos of her husband, and she's holding something prepared for his funeral?

If her husband died in 1885, I could see this matching that date. But the best way to be sure is to find other Morgan relatives, and see if anyone has this same photo.

Not the answer you're looking for? Browse other questions tagged 19th-century wales photo-identification glamorgan or ask your own question.

8
Dating/identifying a Duryea (mid-late 19th century) photograph from South Australia?
5
Could photo be Edward Nettell (1812-1879) and Maria Hocking (1811-1902) of Illogan, Cornwall?
3
Were James Smyth Stacy and family in London, Devon or elsewhere for 1841 Census?
3
Finding personnel records for Railway Company in Panama around 1865?
4
Dating photo by Edwin Lott from Nolton Studio at Bridgend, Glamorgan, Wales?
5
Identifying Australian soldier named Williams in World War I photograph (1917)?
2
Proving parents of Thomas Morgan of Tre-bryn, Pencoed, Coychurch, Glamorgan, Wales about 1808 were Thomas and Ann?
5
Determining a relationship from the 1871 census?
6
What is date of the photo of woman with wrist watch?