What is uniform worn by Herr Schedler in photo taken late 19th century in Hannover?

I have a scan of this photo. It is believed to be the brother of Pauline Schedler (1860 - 1937). She was born in Thann, Alsace, France and family legend has it she fled to the UK in the 1870s during the Franco-Prussian War. Her parents were from Heilbronn and I think this brother was born there.

The photo is approx. 3cm x 10cm and was taken in Hannover. I am assuming late 19th Century.

I am guessing this is a German uniform - is it military? Anyone have any ideas how I can find out what uniform it is, or any other scraps or details and help me place Herr Schedler? 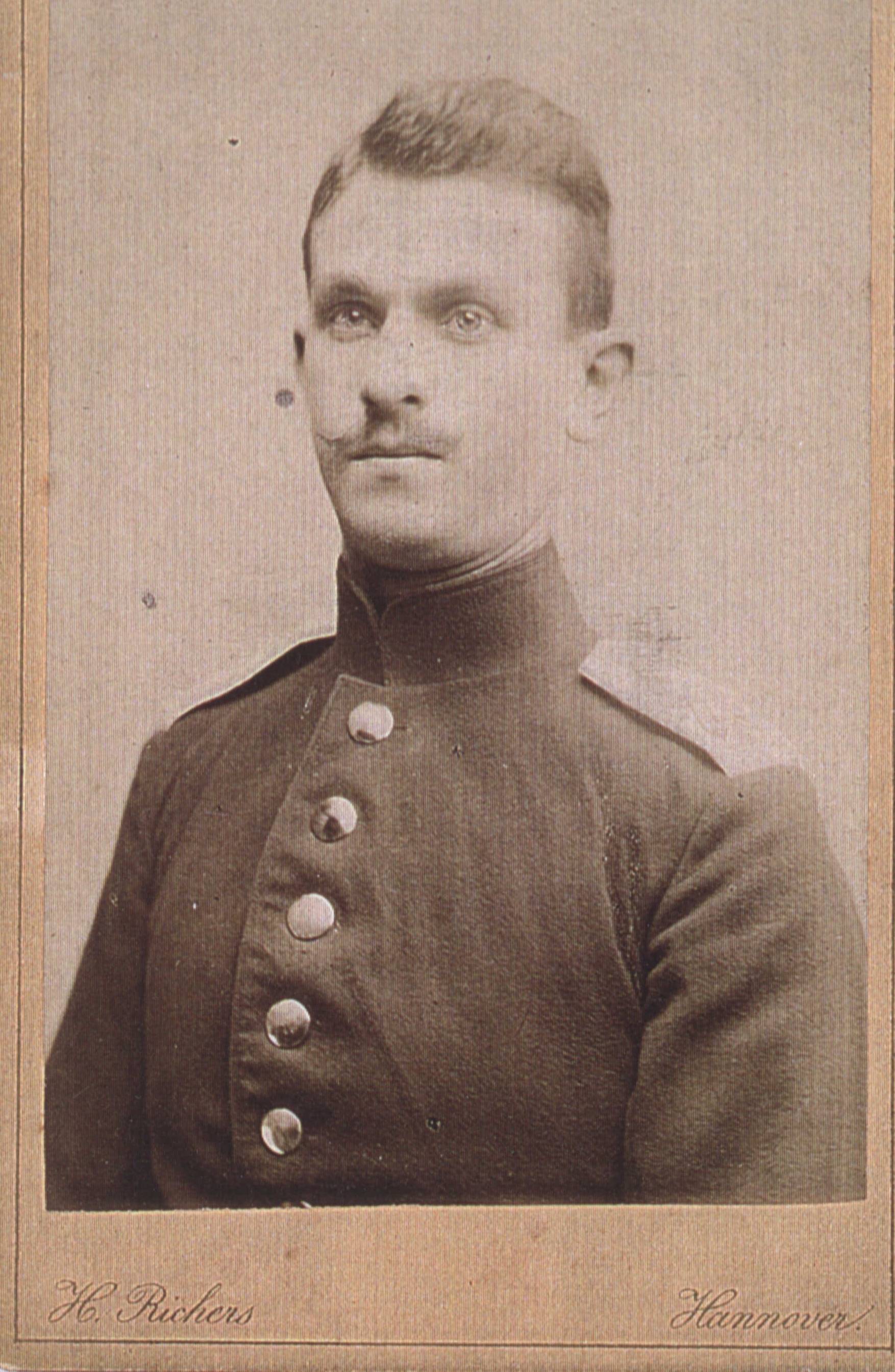 I also have this one, the family are not sure if it is the same person or a twin: 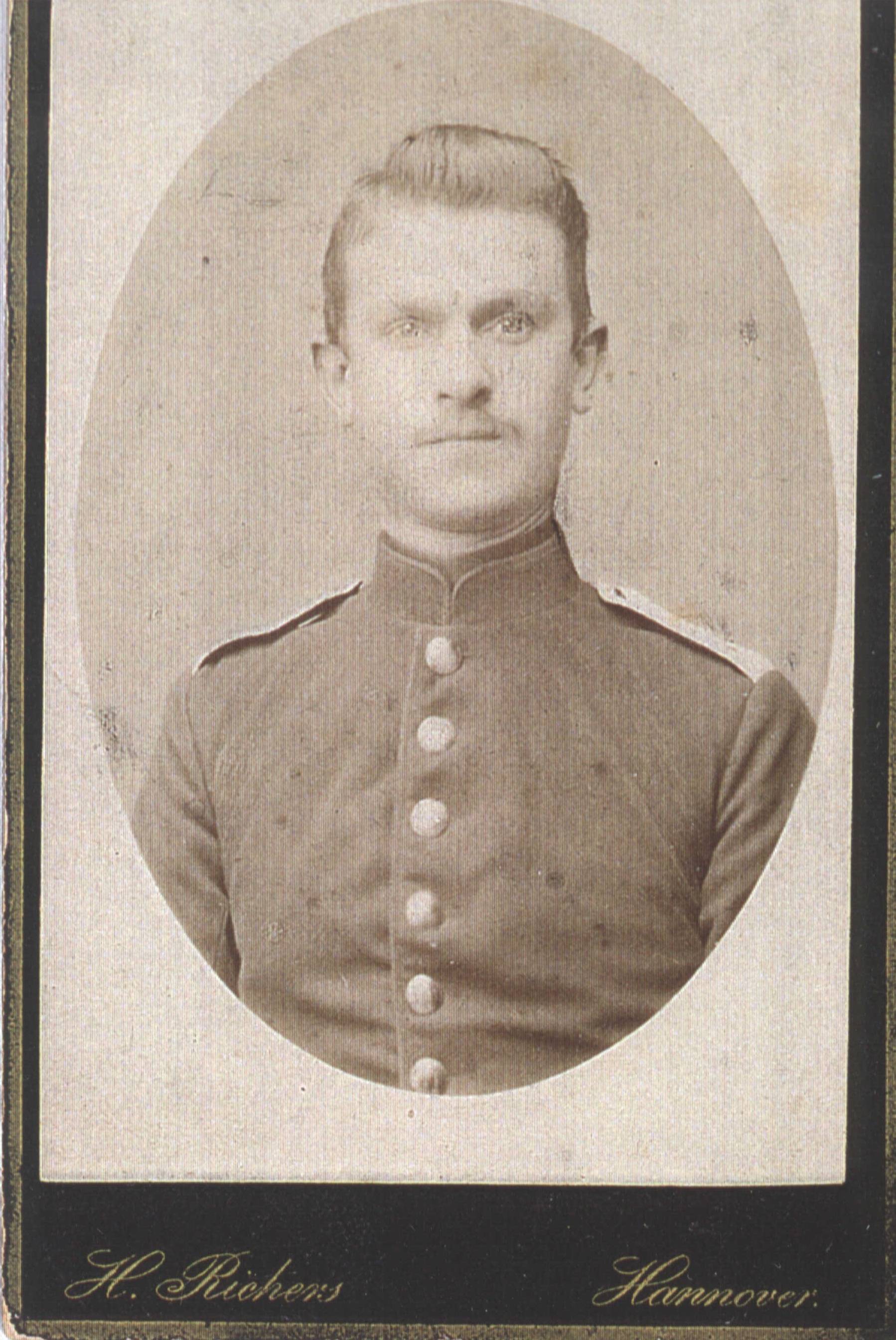 Based on the following the photo is by H. Richers who operated from at least 1878 to 1913 in Hannover (the link has his street address).

Looking at the ears, chin, eye sockets, nose and mouth features I would say it is the same person and both photos look like they may have even been taken the same day in a single sitting with slight change of styling of the hair and just using a secondary pose. Though I guess if you know a twin existed that could also be the case.

The uniform is pretty clearly a Prussian Waffenrock used from 1842-1895. Unfortunately neither of the two show his wrist cuffs as their could be potentially so much more information from them.

Important key factors in examination of his shoulder plates are white, his buttons are plain with no symbols or number sewn into them, and I am not noting any specific color to the trim going up the buttons, nor is there anything on the color.

So my theory is he is just out of training and got his uniform so got photos taken of himself as like a graduation present, or he was a member of the 1st Foot Guard Garde-Regt. zu Fuß (note don't use Google Translate or it won't show the list to match the photo).

If he was a members of that regiment, these links claims it was a noble regiment that they appointed 10 year old princes lieutenants so may have been at least partially 'ceremonial' but also participated in actual battles.

The Franco-Prussian War you mentioned was July 1870 to May 1871, so this photo was taken long after the conclusion of that brief war and before WWI.

I would deduce it was taken most likely 1878 to 1895 based on available information. If you have the birth year of him that should allow you to narrow it down even more as he looks 20-25 I would guess.

Not the answer you're looking for? Browse other questions tagged 19th-century germany photo-identification army lower-saxony or ask your own question.

4
Identifying person in two 19th century photos (one from Hannover)?

6
Origin of young German lady's attire with fore-sleeves and head cover in 1878 photo from Hannover?
7
What uniform is this (US Army branch, where and when)?
6
What year is this photo likely taken?
5
Finding railroad maps for Germany in late 19th century?
4
Identifying person in two 19th century photos (one from Hannover)?
2
What uniform is this?
5
Estimating when photo of ancestor who lived 1833-1902 was taken?