What is the origin or meaning of the photographed ring and pin?

I am looking for information regarding the attached photos. One photo is of a ring that looks well-worn. The other is for a pin that appears to be unused. I am assuming they are military in origin, perhaps for service or an award.

An obit for a close relative of mine includes a mention that he was cited by the Czar for bravery in Plevna. I believe but do not know if this citation refers to the Seige of Plevna. I have seen no records to date regarding his military service and will post separately for further inquiry about that. He was Jewish and in 1855 was born in Latvia. He immigrated in 1887 and died in the early 1900s.

I wondered if the items in these pics were for military service, for serving in battle, or for the bravery citation. These items are in the personal effects of my father who served in the US Navy during WWll. During his life he read or spoke about family origins from Courland. And he was also very interested in Seige of Plevna.

I have looked through various documents I found via Internet searches for Orders, decorations, or medals of Russia, the Russian and Ottoman Empire. I have not looked in any print books yet.

Some of where I have looked already include Wikipedia articles on Orders, decorations and medals of Russia and http://soviet-awards.com/medals5.htm http://medals.pl/ru/ru1.htm

If any of you know the meaning of these items I (and many other relatives too) would be pleased to know. Or if you can point me in the direction of other online or print sources I can look through that also is helpful. Or of course, another targeted place I can post my query is also helpful. 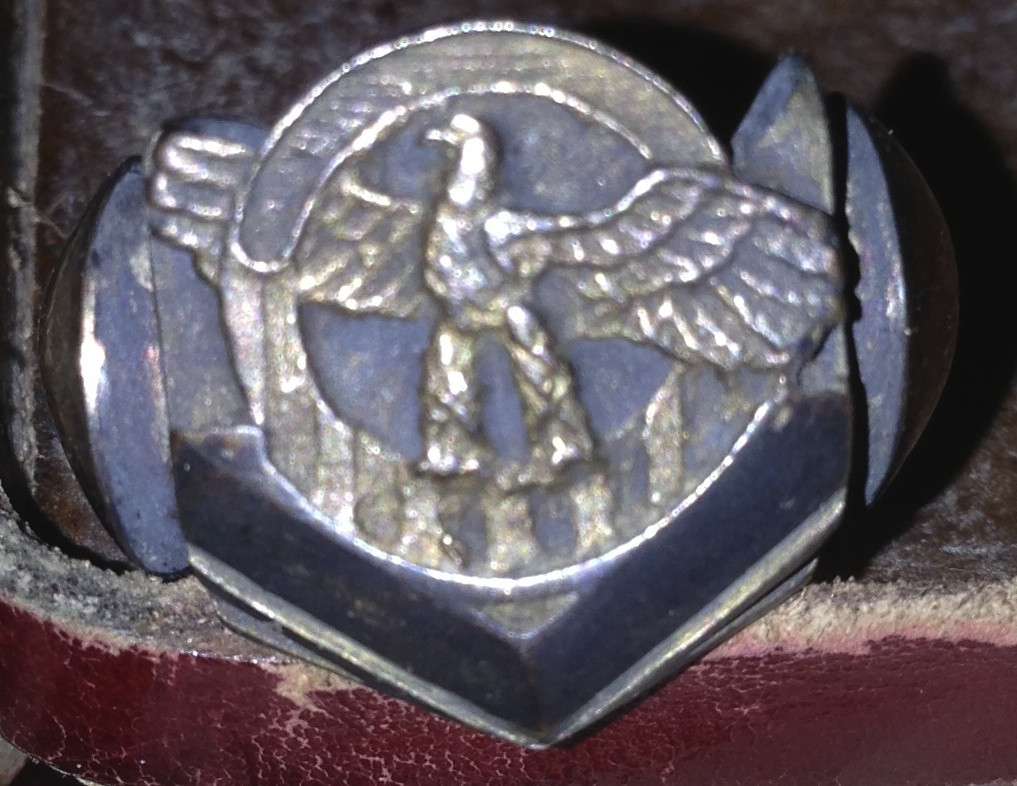 A few notes before I identify it which brings me to my 97% confidence level of my conclusion.

The ring and the lapel pin are from the Fraternal Order of Eagles.

The Eagles organization found in 1898 and is still around today. Their symbols though in the early years varied by localization (even seemed to within state) and or for specialized events. Though there history is marked with several Christian specific activities they are know to have members from many religions including Judaism as long as the individual believed in a 'supreme being'. The Eagles used to be a much more prominent organization than they are today and if someone had just immigrated to the United States it seems reasonable that for both social aspects as well as "Americanization" that they join such an organization. It would also explain the level of wear as it was likely something they wore daily.

What I found the lapel pin with the assumed screw back dates from 1900-1910 and there are a few of them actually on eBay once I knew what I was probably attempting to locate. I have not been able to date the ring and even used Google Image search but did not see one

Interesting things of note that the standing Eagle and the direction of their head turning seems to vary with time period and symbols where the Eagle's is both presenting AND their legs turned is rare in general. The Eagle's even turned direction in their symbolism later (by 1940s it appears) and didn't use the specific design again where as several other early designs (such as this Eagle) can be found repeatedly in their history and anniversary badges.

So there are a couple pieces of good news here:

My father (and many brothers) were in WWII and he had this exact gold pin in his medal collection. It was an Honorable Discharge pin (the "Ruptured Duck"), meant to be worn on the lapel for all branches of US military. 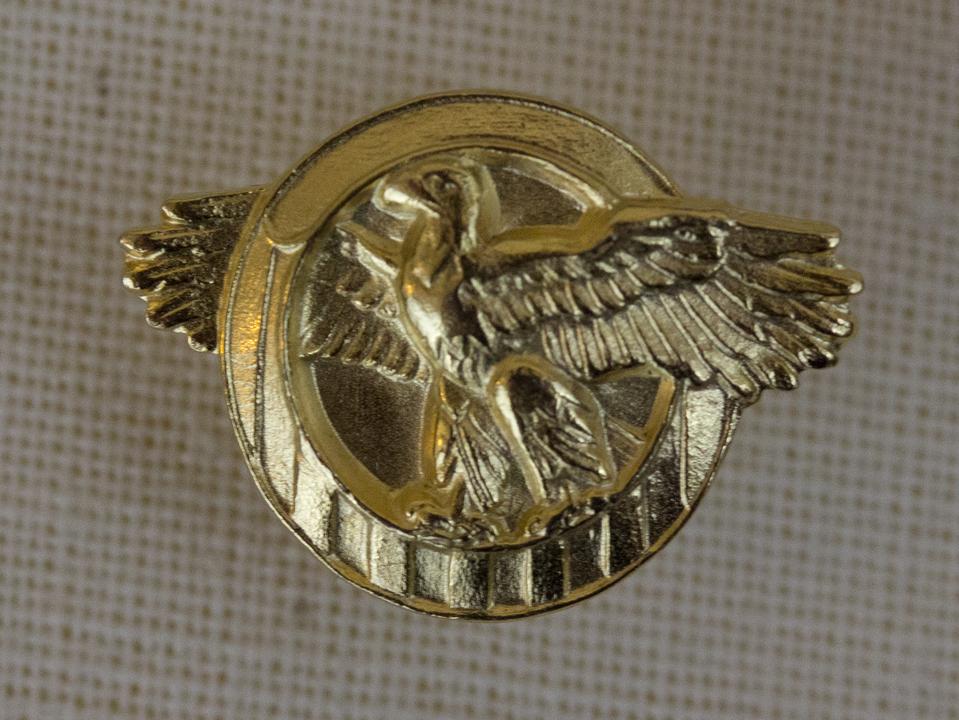 Here is another link for you -- ARMY ORDER OF DISPLAY/WEAR

You can click on each branch at the top of the page. You can also click on the "Issue Regulations" next to the pin for more information.

It also appears that they made rings. 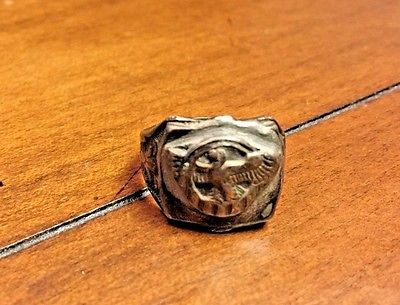 I hope this helps.

Not the answer you're looking for? Browse other questions tagged russia army artifacts or ask your own question.

5
What resources exist for information about ancestors affected by the Expulsion of the Acadians?
7
Were British Army families stationed overseas enumerated in any Census returns?
6
Interpreting tours of duty on British Army service records?
4
What is the name of the sister and what is the town in this passenger list?
7
What uniform is this (US Army branch, where and when)?
9
Which British Army regiment did Thomas Stretch join as a drummer boy in 1774?
6
Correlating military and civil records for one or two individuals
5
What is the date and rank of this photo of a British soldier?
7
When and why to cite contemporaneous certificates as artifacts?