Deciphering an Intended Marriage from England around 1800

I have a record that is an Intent to Marriage for my very great grandparents George Dutton and Ann Davies. I'm trying to understand exactly what it means, including the handwritten portions. Specifically, I have the following questions: 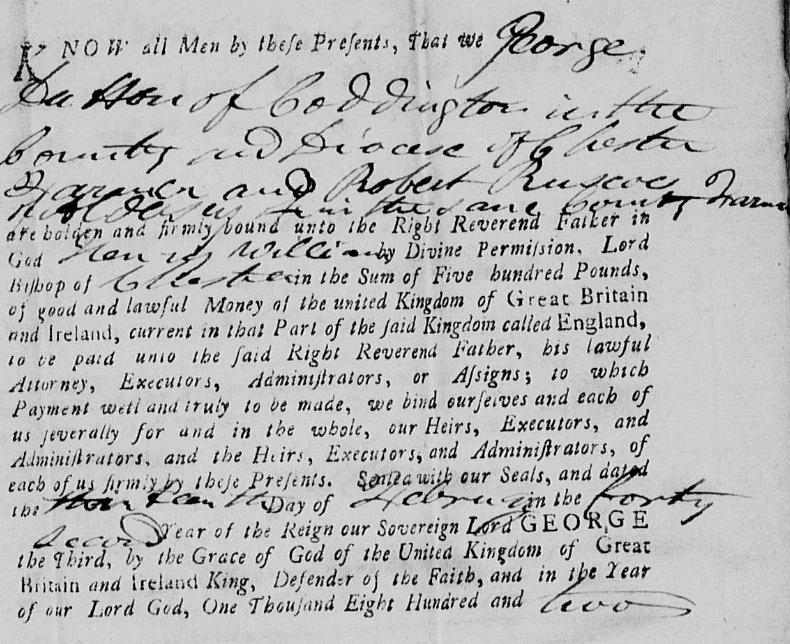 Marriage Bonds (as seen here) are part of the process of applying for a Marriage License. The issue for the authorities is that no banns are read publicly, hence no opportunity for anyone to say, "Hey, those two shouldn't marry." To balance this out, the Marriage License increases the impact of any "illegal" marriage effectively by imposing a massive penalty for "illegal" marriage ("illegal" meaning contrary to church law).

The phrasing on a Bond is perhaps the reverse of what one might expect - a good reason for reading it word-for-word. Rather than say, "If there's a problem, then we have to pay £500", it actually says, "We do have to pay £500, but if everything is fine, then we don't have to pay anything." These two should amount to the same thing.

Therefore £500 is not the cost of a wedding. It doesn't even have to be handed over as a surety.

"Of Coddington" - under all normal circumstances, "Of X" should be interpreted as "Currently (officially) resident in X". In other words, the importance is locating the guys in the contemporary setting.

Bondsmen - most marriage bonds in the Chester Diocese that I've seen have two bondsmen who promise to pay this money if the marriage is "illegal" and in most cases it's the groom and another man. I don't think I've ever seen a woman as a bondsman (indeed, since at this time a married woman's property belonged to her husband, then a married woman had no ability to stand as a bondsman.) I have even seen at least one case where the two bondsmen did not include the groom - leading to some interesting indexing! So the bride's name would not normally appear in this section.

"Know all men by these presents, that we George Dutton of Coddington in the County and Diocese of Chester, farmer, and Robert Ruscoe of Aldersey in the same county, farmer, are holden and firmly bound unto the Right Reverend Father in God Henry William Bishop of Chester in the sum of five hundred pounds... Sealed with our seals, and dated the thirteenth day of February in the forty second year..., and in the year of our Lord God, one thousand eight hundred and two."

I agree with @PolyGeo that it says "County and Diocese of Chester" which would suggest we are dealing Coddington, Cheshire.

I think what you are looking at here is a Marriage Bond where the money posted is a surety that would be forfeit if the marriage didn't take place or was subsequently nullified but would otherwise presumably be returned at some point.

The bondsmen are normally the groom and a male relative of the bride which is why you see two male names rather than one male and one female.

You can see more about marriages bonds in the previous question "What is this Delaware marriage document?".

Not the answer you're looking for? Browse other questions tagged england palaeography 1800s-decade cheshire or ask your own question.

15
What is this Delaware marriage document?