I was perusing some in-laws to my ancestors, and noticed something interesting. One gentleman's birthplace was listed as Stillwater MM, Belmont, Ohio. I couldn't find any Stillwater in Belmont county, but then found out that the MM stands for Monthly Meeting for a Quaker congregation. The Stillwater Monthly Meeting meetinghouse is located in Barnesville, Belmont, Ohio. In other words, Stillwater MM is more of a description of which congregation you belonged to, rather than the name of place you were born (although your congregation has ties to your local geography).

I am curious about what the purpose of listing the birthplace as Stillwater MM is. Does that mean that the ancestor was born at the meetinghouse? Or just within the congregation's geographical boundaries? If the latter, then it would be more difficult to pin down a more specific location, since Stillwater MM is a boundary that extends beyond the town of Barnesville (which is just where the meetinghouse is).

I arrived at these conclusions and questions after researching for quite some time about the Quaker terminology. I was and am still confused about it, and think it might be worth disambiguating for future researchers and giving a more understandable location for those not familiar with Quaker administration.

Is anyone familiar with these types of locations for vital records? How do I interpret them?

Some have been quoting "Encyclopedia of Quaker Genealogy, Vol IV, By Wm Wade Hinshaw" for instance. Makes sense, that it's a Quaker record. Not all instances of "Stillwater MM" traces back to this collection, but enough do to assume that many of them might have originated there even though not cited.

birthplace quakers
Share
Improve this question
edited May 23 '15 at 19:27

Does that mean that the ancestor was born at the meetinghouse?

The short answer is, the person's birth date appears in the monthly meeting records. It could be as part of a family group record when the family joined that monthly meeting, and the birth may not have been in the geographical area of the meeting or even in Ohio. If the family has moved from other areas, there might be a notice about the family leaving in the previous meeting's minutes.

Before trying to answer this question, I think it is important to back up and do a bit of analysis of the work which prompted this question. You say that some of the places which are using the notation Stillwater MM, Belmont, Ohio are authored works (for a definition, see this answer) citing The Encyclopedia of Quaker Genealogy, Vol IV, By William Wade Hinshaw.

My guess (and this is only a guess) is that people have not actually looked at the minutes of the monthly meeting, or at Hinshaw's Encyclopedia, but are instead relying on a source which has abstracted Hinshaw's work, or Hinshaw's index volume, Index to Encyclopedia of American Quaker Genealogy. Looking at Google Books for Quaker histories, I see references describing people as being "of" a particular meeting. Just like other genealogical writings which say that someone is "from" a particular place, that doesn't mean the locality is that person's birthplace -- they could live in the area, but have actually been born in a different town (perhaps nearby).

That disclaimer aside, let's look at what format Hinshaw's Encylopedia uses. Since Volume IV is not available to view at Hathi Trust, I chose a page from Volume I: 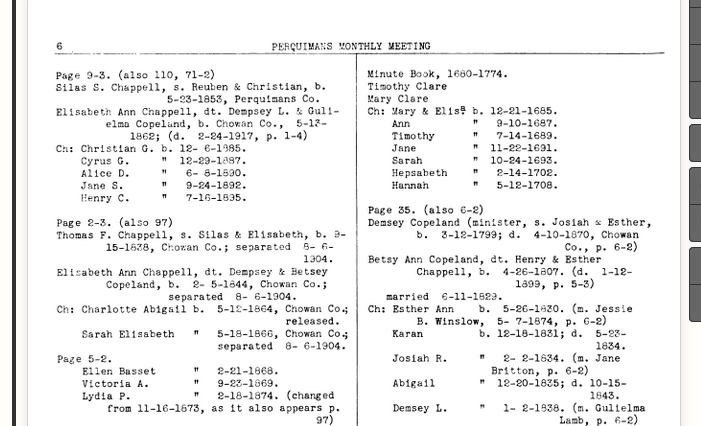 You can see that the name of the Monthly Meeting is in the header at the top of the page, and that some, but not all, of the data abstracted in the Encylopedia has a birthplace noted. My guess is that the people consulting Hinshaw have substituted the name of the Monthly Meeting for the birthplace because that is the only place information they have, in the same manner that someone researching in the UK might list the GRO Registration District that the birth was registered in as a placeholder, when they don't have the birth certificate in hand.

To see what information is actually listed in the Meeting minutes, you would have to try to find the original records. Ancestry.com has a downloadable Research Guide to Findng Your Quaker Ancestors which shows what the originals might look like. The guide says:

Monthly meetings often kept birth registers. Births are sometimes listed by date and sometimes by family group. If the births were recorded at a later date, registers may name each child in the family in succession.

Along with names of children, birth dates, residence, and parents’ names, registers sometimes include details about marriages or deaths of children listed. You may also find details on the mother’s parents.

The Family History Library Catalog lists this transcription and index for a yearly Meeting held at Stillwater:

Transcription and index to the minutes of Ohio Yearly Meeting of Friends held at Stillwater, P. O. Barnesville, Ohio, 1907

To look for other records, try the suggestions in the Family Search Research Wiki article on US Quaker Research. I do not see the Stillwater Monthly Meeting in the collection U.S., Quaker Meeting Records, 1681-1935 on Ancestry.com (disclaimer: I haven't searched the entire catalog).

Searching for Stillwater yields two different meetings by that name, each with their own information page describing what records are extant and where they are held.

Click on the names of each meeting to see the history of each meeting, where the records are held, and other information like local histories which may have references that will lead you to other records.

FamilySearch.org often lists a Monthly Meeting (and other places of Worship) as a Standardized Event Place (standard name for a location). For instance, this enables the exact location of a marriage ceremony to be listed. But, especially in the case of the Religious Society of Friends (Quakers), the name of a meeting can be the same as its location. Somerset Mm, Belmont, Ohio, United States and Somerset Township, Belmont, Ohio, United States are both valid choices on the FamilySearch list of Standardized Event Places. If you let FamilySearch suggest a standard for Somerset, Ohio, it will choose the 1st one alphabetically, which in this case is the Monthly Meeting instead of the Township.

Not the answer you're looking for? Browse other questions tagged birthplace quakers or ask your own question.

5
How accurate do late 20th century Genealogical histories of New England in early 19th century tend to be?

3
How can I establish an early 19th century birthplace?
3
What does this Y symbol abbreviate in a Quaker birth record?
6
Interpreting Quaker dates in eleventh or twelfth month with only one year?
6
Sources of Philadelphia Quaker records besides Swarthmore College
3
How to get birth place in Gramps 4.2.1?
2
Determining date for Quaker wedding?
4
What does Orring County North Carolina mean in Quaker records?