Searching and analyzing Valuation Rolls in Scotland in the early 20th Century?

Whenever I find a street address for a person I'm researching, I like to look for property records to find out whatever I can about the building the person was living in. Even when the person is a tenant rather than a property owner, there are often useful clues to be found (especially in the US, where property tax records can reveal how many units are in a multi-family dwelling).

Brief descriptions in the Family Search Research Wiki article on Scotland Land and Property and a brief page on The National Archives of Scotland talk about Valuation Rolls, a property record which "gathered information about the ownership and tenancy of land and houses in order to raise property taxes".

A fuller description of the records can be found at the website National Records of Scotland, which has a Research Guide and a more extensive article on how the Valuation rolls between 1855 and 1975 were divided into counties and burghs.

My research subject is William Henry Cole, born around 1890, who can be found in other questions here. He was a Mason, and according to the Mason Membership Cards (accessed via Ancestry.com), his mother lodge was Clyde Lodge #408 in Glasgow. The membership secretary at his mother lodge very kindly provided an address from their records of 1 Holmhead Street, Glasgow.

My date bounds for this address are after Census Day, 1911, where he was enumerated with his family in Cheshire, and before October of 1924, where an outbound UK passenger list gives his former address in Belfast. Given the dates of his participation with the lodge, my estimate for when this address might have been valid is somewhere around 1913.

Scotlands People has Valuation Rolls for the following years:

Of these years, it seems likely that William Henry Cole would only appear as a tenant or inhabitant in 1915, and perhaps in 1920; in 1901, he is still living with his family, and by the time the 1925 data was collected, he was already in the US.

Using the Advanced Search in 1915 for Holmhead and setting City: GLASGOW CITY; Parish: GLASGOW; Place: ""; Burgh: "GLASGOW" yields 179 records on Holmhead Street and other places which include the name Holmhead. This yields an owner and several tenant occupiers.

If I were on a subscription website where all the images were available to view, I would collect the images for the most likely candidates from my search by name, and whatever I could find for 1 Holmhead Street for reference purposes. But on pay-per-view, I dislike paying for images when I have no idea whether they are likely to be useful in future; if I want to pay for specific images, I have a long list of documents (wills and certificates) which have higher priority.

So I'm wondering what strategies would be best, for capturing the search results and storing them, in case I want to come back to this record set later on, and what other records might be helpful to use in conjunction with these records. If I had gotten a hit for William Henry Cole at 1 Holmhead Street, I would have purchased the image to see what else I might find, but there's no guarantee that the William Henry Cole I found elsewhere in Glasgow is the William Henry Cole I'm looking for.

One strategy might be to make a spreadsheet of the wide by-name search and show which people show up in multiple years at the same location, and thus are likely to be too old to be my person of interest.

I also plan to collect the search results during this free access period for the address given for the William Henry Cole I found at a different address in Glasgow, in case it does turn out to be the right person. There's no guarantee that other tenants at that address are his associates, but without a list of the names, I won't able to recognize them if they turn up in other records.

If you have experience working with Valuation Rolls, what techniques worked well for gathering and organizing the information you found during your searches and analysis?

This is a stub of an answer which I'll expand on, once I find the notes I took during my previous searches of Scotlands People.

Following a suggestion from AdrianB38 to look for directories at the National Library of Scotland, I began by looking for a period map. Some City Directories have numerical guides as well as alphabetical lists, and if you can find a period map to use along with the city directory, the combination can be very helpful.

According to Glasgow Guide's table of Street Name Changes, described as "A list of Glasgow street names which were subject to change prior to the 1940s". Holmhead Street's new name is Cunningham Street, C1.

However, when I attempted to use the NLS's historical map feature, which has a gazetteer, no results appear if you type in Cunningham Street, C1.

Next I discovered a thread on an Ancestry message board Old Glasgow Streets, where an Ancestry member paulh1960 asked for help finding an address on Holmhead street. User DonGillies61 posted this reply:

The street no longer exists. It WAS in the city centre, but nowadays the Buchanan Galleries shopping centre covers that area. If you look at a modern map it ran in between and parallel to Cathedral Street and Killermont Street.

The thread had links to the OS maps at the National Library of Scotland, and to a 1935 Glasgow Street map, both posted by member Tony Allison.

Having these two maps to triangulate will help once I start exploring the city directory collection. 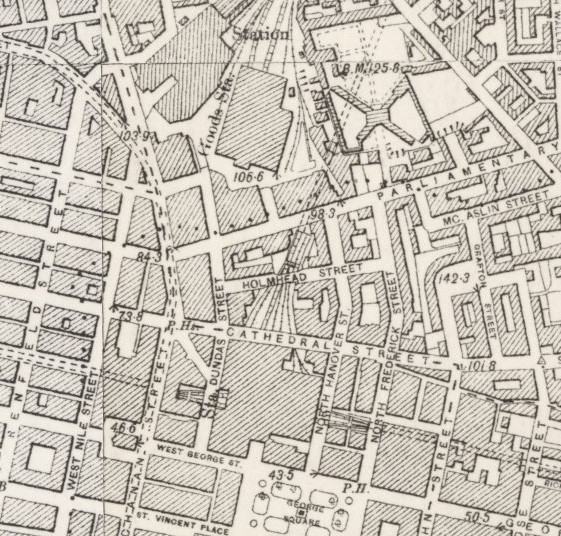 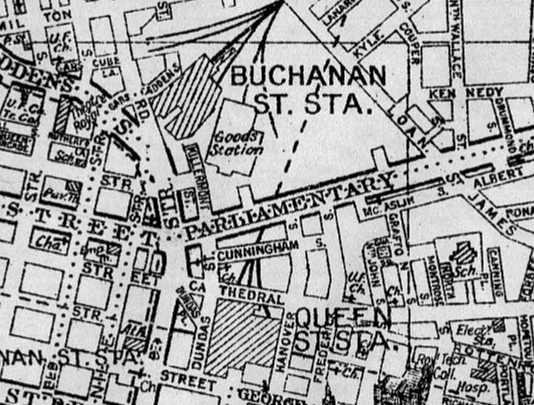 Snipped from quarter 2 of 1935 Map of Glasgow

We can see from the maps that Holmhead Street had already been renamed by the time the 1935 Map was published.

Not the answer you're looking for? Browse other questions tagged 20th-century scotland property-records or ask your own question.

9
Sources for late 19th and early 20th century Belgium and France?
9
Finding evidence for divorce of Hugh Sillars and Agnes Macculloch in mid-19th Century Scotland?
6
Where can I find early-20th century residence and trade information in the United Kingdom?
5
Tracing 20th Century UK family history in Brighton, Sussex, England?
5
Techniques for searching Somerset electoral rolls?
7
Seeking marriage record for James Slight and Elizabeth Boyd from late 1820s probably near Haddington, East Lothian, Scotland?
7
How to connect digitized images to a map?
4
Apprenticeship records for Ship Carpenters at Glasgow, Scotland in first half of 19th Century?
8
Where did my 2nd great-uncle William Morris go after 1914?