What does "Containing by Estimation Seven Days' Work" mean in 1810 Land Auction advertisement?

A search for David Mellor found this advertisement for a land auction in an 1810 newspaper. In auction Lot II there are two "closes" of land being sold with David Mellor being listed as Occupier.

What does "Containing by Estimation Seven Days' Work" mean? 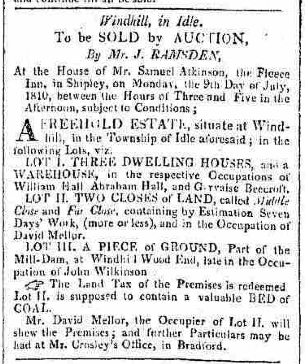 The Free Dictionary defines a close as "A parcel of land that is surrounded by a boundary of some kind, such as a hedge or a fence."

From the context it appears that the estimation of "seven days work" is a measure of how large the land parcels are.

A search for the phrase "seven days work" turned up similar descriptions in The Bradford Antiquary: The Journal of the Bradford Historical and Antiquarian Society, Volume 1 (1900), published in Yorkshire -- on page 60, a description of mortgages says:

With the Hall were sold several closes of land among them being "The Ffalderinge" (containing eight days' work).

and following on the same page are descriptions of several other land parcels.

In Transactions of the Illinois State Horticultural Society, Volume 3 (1904) on page 493 there is a discussion of how much yield can be gotten out of a parcel of land, which says in part:

Last year we had 13 acres of yellow Dent corn, which produced 1,260 bushels crib measure at two and one-half square feet to the bushel. This corn cost seven days' work for breaking the land and two days pulverizing and dressing the ground, one day planting, nine days cultivating, twenty-five days gathering the crop ....

I suspect that the 'seven days work' might be a rough estimate of how long it takes to break the ground, and is intended as a measure of how large the enclosure might be.

Resources for using land records in genealogy include:

If you can find out more about the location of the properties in this lot, you can try searching for tax rolls, like this record set from Yorshire, Land tax assessments for Bradford township, 1781-1832 found in the Family History Catalog. Sometimes valuation rolls list the occupier of the land, so David Mellor's name might appear in those records, even if they are not indexed to be searched by occupier's name.

Edited to add: an anonymous editor contributed this definition from ranchoregon.com/land-measurement:

The surface of land a man can work (farm) used to be a way to measure land.

The blog post "All in a Day's Work" by The Legal Genealogist has a glossary of law terms referring to things that could be done in a single day.

Not the answer you're looking for? Browse other questions tagged 19th-century england land or ask your own question.

4
Meaning of term Sojourner on 1794 Marriage Record at Marystow (Devon) for John Creber?
5
Researching photographers in England and the UK
3
Locating Manorial Records of 1843-9 Copyhold by William Hitchcox in Wheaton Aston, Staffordshire, England?
0
What might occupation of "public school" mean in 1885 Sands and Macdougall Directory (for South Australia)?
2
Finding wills/probate for printers of Brecon, Wales who died in 1794, 1820 and 1839?
5
What did a Scientific/Philosophical Instrument Maker do and what other sources might be worth looking at?
4
Understanding 1807-1812 Pennsylvania land records document?
5
How accurate are birth dates on the 1939 Register?
6
How did two birth records from the same sub-district end up in different districts?
11
How can I distinguish between name changes and missing records?