I always wondered why my 4th great grandparents Edmund Rouse (of St Clement) and Christian "Kitty" Crossman (of the parish) who married on 1 Feb 1801 at Truro St Mary, Cornwall appeared to have had children born and christened over a period that included a significant nine year gap after the first two:

Then I came across the Statement of Service below for Edmund Rouse of St Clement that seems to very neatly explain it. This was my transcription of what looks like a standard form with any handwriting shown in bold. If it is the same Edmund Rouse then he may have been away from home for at least the period 13 Jul 1804 until 16 May 1812. 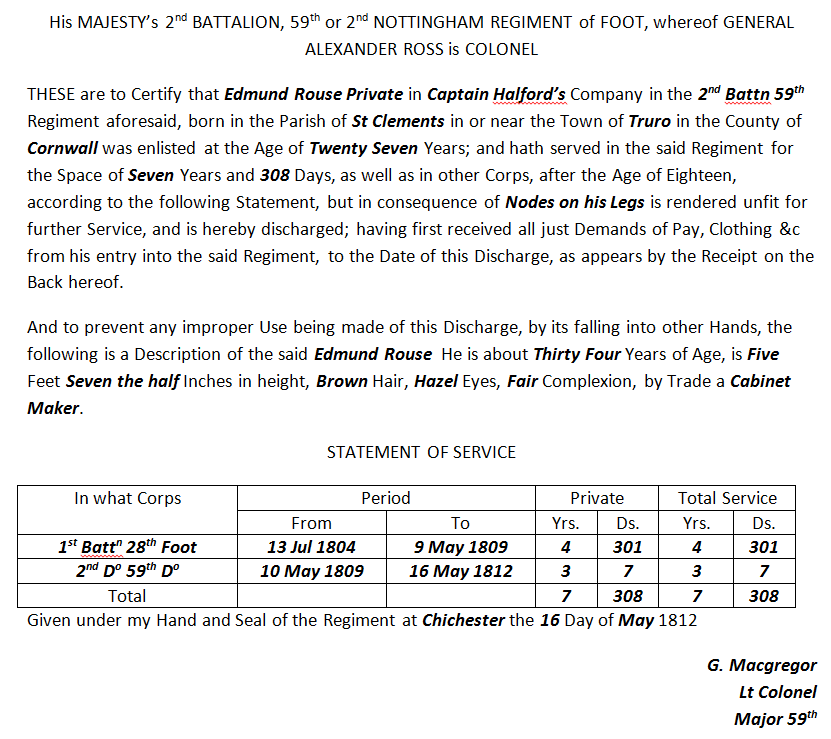 I am hoping that someone with experience of reading such Statements of Service may be able to provide their thoughts on whether it seems likely that someone who was described as a Cabinet Maker on their 1812 discharge would become a Weaver 15 months later? For example, I'm not sure whether the form indicates that the trade of Cabinet Maker was what he did before enlisting, or whether it was a trade he may have acquired during his service, and left it with. I'm also not sure whether a Private suggests he was a combatant or part of the army's support staff.

From a FindMyPast transcription I know that Edmund (aged 41) was buried on 31 Jan 1819 at St Clement i.e. the same date and place his last child was christened. Consequently, I have no census records to check his occupation.

My theory is that Kitty, described as a carpet maker in the 1851 Census, and their son Petherick (or Patrick), described as a hand carpet maker in the 1861 Census, may have put together a business while Edmund was away (presumably at various battles in Europe), and then on his return, perhaps due to the "Nodes on his Legs" that was a more attractive occupation than cabinet making.

The image of Edmund's trade clearly says "Cabinet Maker" but as the answer by @SueAdams suggests this is possibly a transcription error from another earlier form or perhaps "Carpet Maker" being misheard and written down as "Cabinet Maker".

First, Cabinet and Carpet are close enough to have been mis-transcribed on one or more records, so checking images of the originals would be a good idea. Trades or occupations are usually what the man did before enlisting.

Private is Edmund Rouse's rank, so he was a common soldier. If his unit saw combat, he was likely involved. You have his regiment, the 2nd battalion of the 59th regiment of Foot, which is the key to researching soldiers in the British army. Regimental muster books and pay lists are a rich source of information about ordinary soldiers, giving details of how each soldier's pay was calculated, based on rank, length of service, the number of days he served during a particular muster period and allowances. These records are at The National Archives in series WO 12. The records from Edmund's regiment in his period of service, 1804-1812 are in pieces 6865-6868. Although too late for Edmund, a selection of these records from around the battle of Waterloo in 1815 are on Ancestry in the "UK, British Army Muster Books and Pay Lists, 1812-1817" collection.

I have just posted a question about Reading remarks from Royal Hospital, Chelsea record from early 19th century? which is about the same Edmund Rouse.

In the image linked there, from Ancestry.com's UK, Royal Hospital, Chelsea: Regimental Registers of Pensioners, 1713-1882, under Trade or Occupation, his is clearly given as Carpet Weaver.

Not the answer you're looking for? Browse other questions tagged military-records cornwall occupation or ask your own question.

4
When, where and to whom was William Henry Rouse born in about 1832 near Truro (or Redruth), Cornwall?
1
Finding identity of Eliza Ann Wills who witnessed marriage of Grace Martin Wills and Matthew Nettell in 1865 at Redruth, Cornwall?
5
What did a Scientific/Philosophical Instrument Maker do and what other sources might be worth looking at?
5
Did Somerset Militia recruit local Cornish soldiers when based at/near Truro around 1798?
6
Correlating military and civil records for one or two individuals
4
Reading remarks from Royal Hospital, Chelsea record from early 19th century?
2
Finding death/burial record for Christian "Kitty" Rouse after 1851 Census in Truro, Cornwall