What might occupation of "public school" mean in 1885 Sands and Macdougall Directory (for South Australia)?

Below is an image from the Sands and Macdougall Directory in South Australia for 1885 which lists Sellars Louisa, public school, Hindmarsh on page 388/984.

I think this may be her, but I am wondering how to interpret "public school" because I am used to entries in these directories usually referring to heads of households (who were then most often adult males) and that part of the entry being an occupation.

Her father, Robert John Steven Sellers, does not appear to have been listed in 1885, but in 1884 he was at Young Street, Parkside (another inner suburb of Adelaide) and in 1886 he was at Halifax Street, Adelaide. Louisa Sellars is not listed in either of those two years but in 1886 she seems to have been replaced by a Lavinia R. Sellars (public school, Hindmrsh; who may be worth me investigating further). 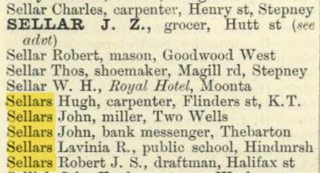 I am not yet certain that this Louisa Sellars and my great grandmother Louisa Margaret Sellers/Sellars are the same person and so I am after advice purely on how to interpret the entry.

There's a history of Hindmarsh at www.sahistorians.org.au/175/bm.../a-heritage-history-of-hindmarsh.doc which indicates that Hindmarsh Model School was founded in 1878.

With some useful ideas thrown in by others I did some more research in the Sands and Macdougall Directories and Trove newspapers and noticed the timeline below:

I think it is now clear that the Louisa Sellars listed with public school, Hindmarsh in the 1885 Sands and Macdougall Directory is actually Lavinia R. Sellar, head mistress of the infant department.

My advice to anyone trying to understand the "occupation" of public school in Sands and Macdougall directories will be to consult the Trove digitised newspapers to see if they can find a record of the appointment to a position by the Education Department (of South Australia).

Not the answer you're looking for? Browse other questions tagged 19th-century australia south-australia address directories or ask your own question.

15
Determining what records are available in a particular locale?
4
At what ages did British students enroll in school in the late 1800s and early 1900s?