How to interpret a reasonable X DNA Match, but no shared cM Autosomal result on GEDMatch?

I recently uploaded one of the Autosomal DNA results I manage to GEDMatch.com and ran the X-Match routine and came up with a puzzling result.

The strongest result by far on the test has 37.2 shared X cMs length (as pictured below) but GEDMatch is reporting 0.00 Autosomal shared cMs with the same individual. My understanding is your total cMs are the combination of Total X and Autosomal cMs even though not X-cMs are not included in the total in all sites. 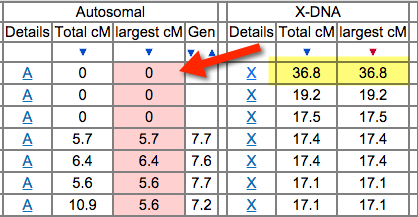 Both kits being compared are Male, though the two others with 0cMs on Autosomal are female.

X-DNA Result Only from GEDmatch.com

The key to reading the above graphic is here:

I emailed the person to confirm they uploaded their autosomal results also as well as try to determine if there is an immediately obvious shared ancestor, but have not heard back.

I also read the Working with Autosomal Results question which in the answer stated "One other minor point of leverage in your situation: If you have a significantly-sized match on your X chromosome, that allows you to exclude your paternal grandfather's side (whether or not your half-sister matches). That is just a result of the normal rule of the X never going from father to son." which is what I was trying to determine which side an autosomal result was from when I came across this situation.

I also read ISOGG's articles on both how Autosomal scores are calculated (it is different between each site where GEDMatch allows you to score them the same way, such as ftDNA does not include X shared cMs in score) and working with X-Results but it is still not clear as how to interpret this situation.

I have also tried adjusting the minimum cM length all the way down to 4 and still nothing when doing a 1:1 with this kit on the Autosomal test. I have also looked at their "list" of matches and they have Autosomal matches with shared cMs but none on the kit I am comparing it to?

Has anyone experienced similar results and is there something else I am missing in its interpretation?

For a person who is related somewhat distantly (say, third cousin or farther), it is common to share only a single DNA segment (if any). The shared segment may be located on an autosome or, if the relationship is through relevant maternal connections, it may be located on the X chromosome.

Thus it is quite common to have results where there is a shared X chromosomal segment and no autosomal shared segments. This is just how the random passing of DNA through the generations happened to occur in the paths the DNA took between the common ancestor and the two related persons. It is much like the complementary case of having a single autosomal segment being shared (which would be on exactly one of the 22 separate autosomes) but not having a shared segment on the X chromosome.

The only special consideration is that if you share an X segment from a common ancestor, then it can help you exclude parts of each of your pedigree trees from consideration as the possible source of the shared segment. Any part of the tree that runs through two successive males can be excluded since the X DNA cannot be passed through that connection. Thus if you are male, you can exclude half your tree (your paternal side) since the X segment did not pass that way. If you are female, then you still have to consider your father's maternal tree, but can exclude your father's paternal tree.

Because men pass their X unchanged to their daughters, X DNA can go longer in time with fewer recombinations. I have an X match of about 33 cM and no matching autosomal with a known 4th cousin once removed. My Dad has the same X match but also some autosomal. A large chunk like yours would be about at that relationship level so keep looking.

Here is my blog post on the X http://blog.kittycooper.com/2014/01/what-does-shared-x-dna-really-mean/

Kitty CooperKitty Cooper
9911 silver badge11 bronze badge
Add a comment  |
0
Want to improve this post? Provide detailed answers to this question, including citations and an explanation of why your answer is correct. Answers without enough detail may be edited or deleted.

2
What would the starting shared cM number be for abnormally close relationships in Autosomal DNA test?
5
Is the Autosomal DNA testing ever wrong on relationships?
6
Determining if an autosomal and X-DNA match is my half-sibling?
10
Is a half-sibling match on AncestryDNA reliable, or is more testing needed?
3
Finding paternal family using DNA?
2
High match on autosomal DNA, but no X DNA match to mother's half sister
6
Acceptable number of no-calls in autosomal DNA test results?
5
Why are MyHeritage atDNA SNPs higher than other test sites?
2
No shared X DNA segments found
1
Explaining how all DNA matches are shared with Half sibling?