How to identify formal military photos?

Is there a web site out there or some place to ask about the context of formal US military photos? I would like to know the time, location, and reason of a photo.

For example, here are two photos that I know are US Army from WWII, but I don't even know if they were taken in the US or in Europe. They were clearly officially staged, so there must have been a special event they are related to. Is there someplace to look this up, ask, etc? 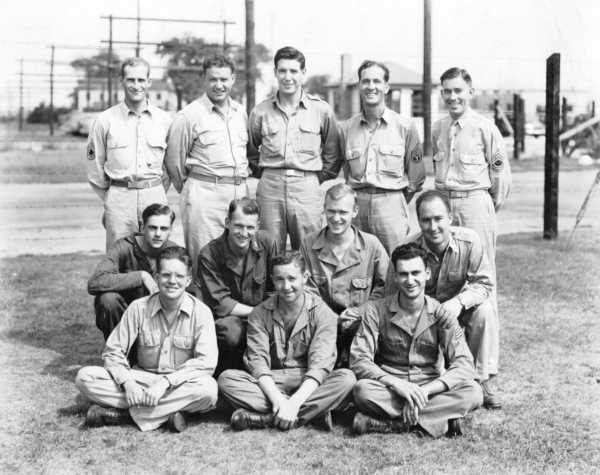 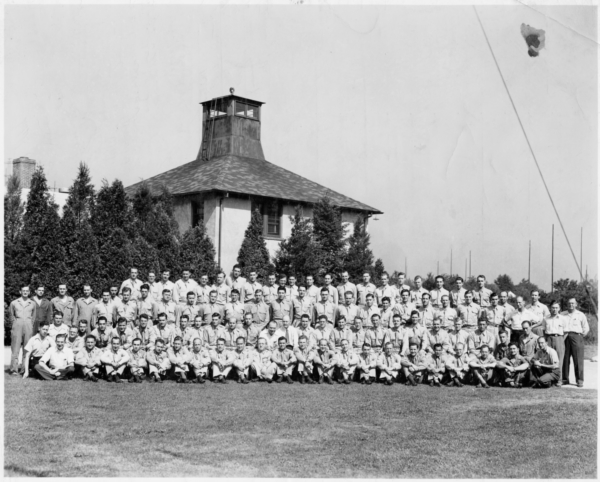 Incredibly, the names and home locations for most of the men are listed on the back. Yes, even for the large group photo.

Added in response to comments

Yes, the two photos are connected. I didn't get into the details of these particular photos because I was asking a general question about how to get more information on such things. Of course I do want information on these photos, but thought it would be off topic here as being too localized or something. Yes, some of these people may still be living, which is why I haven't mentioned any of the names.

My father (Thomas Greenleaf Lathrop) is in both photos, but he died in 1978 so I can't ask him. He was in the signal corp during WWII, trained in Camp Kolher outside of Sacramento CA, got shipped to England, then into France and Germany. These photos could be from Camp Kohler, England, France, Germany, or anywhere else he was stationed until being discharged in Berlin after the war ended.

One place to start might be the US Army Center of Military History. Their page of Frequently Asked Questions contains many tips about how to research your relatives' service.

The answer to these questions might also yield clues which would be useful to you:

And especially this one:

An archivist at College Park might be able place these photos in context by comparing them to other photos in their holdings. Some NARA photos are accessible via Wikimedia commons, such as this photo: Officer Candidate Graduating Class Ft. Monmouth, N.J. December 18, 1942 U.S. Army Signal Corps Original size 11 X 14 in.. You can contact NARA electronically here: http://www.archives.gov/contact/inquire-form.html#part-b

I'd be surprised if someone, somewhere couldn't identify the building in the background of the second photo.

Via the Internet Archive's Wayback Machine, I was able to view a snapshot taken on 5 Jan 2013 of the website that used to be maintained by The California State Military Museum (the museum is closed; the website was one of the references for the Wikipedia article Camp Kohler).

That snapshot lists these Known Units at Camp Kohler:

If you haven't already considered getting your father's Official Military Personnel Files (OMPF), you might investigate that first, in order to narrow the date ranges he might have been at any of the possible locations. (It might not be available due to record loss: see the The 1973 Fire, National Personnel Records Center.)

The Signal Corps was only at Camp Kohler for a limited time before it was abandoned as a Signal Corps installation on March 1, 1946.) See Wikipedia: List of Military installations for lists of other bases.

Not the answer you're looking for? Browse other questions tagged united-states 20th-century photo-identification army or ask your own question.

14
Determining whether soldier in US Civil War was German mercenary?
13
Identify people in 20th-century photos once the older relatives are gone?
3
Dating and identifying Penzance photos – are they of George and Fanny Wills?
5
Could photo be Edward Nettell (1812-1879) and Maria Hocking (1811-1902) of Illogan, Cornwall?
8
What is the origin or meaning of the photographed ring and pin?
6
Until what age did little boys in the early 1900s wear dresses?
4
Identifying person in two 19th century photos (one from Hannover)?
7
What is date of the photo of woman with wrist watch?
2
Does the 1921 English "Army" Census records include the "Soldier Number"?