What is considered a strong match on a Big-Y DNA test?

I have done Big-Y on FamilyTreeDNA for a single individual and considering others as well as using the YFull interpretation service without fully understanding how to use it because I wanted to capture the data.

FamilyTree DNA implies their are currently 36,288 known SNPs (for the tested individuals) in their catalog, where as a sample YFull report shows 63,329.

So I was wondering if anyone has found any good guidance on using the test for "matching" yet and what exactly is a strong match?

My understanding is as a general rule of thumb 'to start with' used by some of the more advanced Big-Y/Y-Full groups in terms of known SNP differences as FamilyTreeDNA displays the information is that if one can reach a point of 5 "Known SNP Difference" up to about 10 SNPs that there is likely a connection in likely the last 500 'or so' years which is similar to STR matches but not as definitive as at least partially it does not take into consideration shared novel variants.

FamilyTree DNA will not display the individual as a match at all if the Known SNP Difference is greater than 10.

I was told though by ftDNA they do not currently have matching strength charts nor will define a 'strong match' like the other tests because the science / understanding of Big-Y testing is still evolving (as new SNPs are discovered for example) and not as clear cut such as with the Y-111 STR test; so they simply give a high level explanation and say it is for advanced users.

Family Tree DNA's Big-Y match page does not currently have a genetic distance.

In the uploading of multiple BigY results I have seen that YFull matches are 'practically' defined as members of the same same Sub-Clad assignment, or immediately adjacent granular sub-clad. 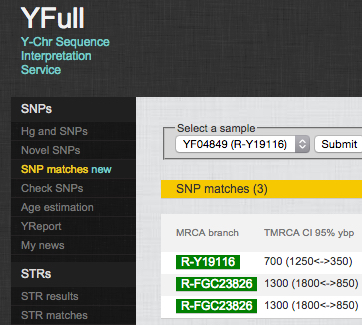 Ytree Drill Down for individual which was Subclad Y19116, and his matches are in the MRCA branch/tier immediately above; which there is 4 additional SNP in Y19116 not in R-FGC23826.

Note 1: As of February 2016 with the older version of the YTree (at least as old as early 2015) it has loaded; ftDNA Y-111 STR test will define the sub-clad about 7 branches deep from the primary Haplogroup (R-M269 in this example). The ftDNA BigY test will go 4 additional branches deep (R-U106 in this example). YFull I have had the detail go 4-6 layers additional sub-clads deep.

Note 2: The ftDNA BigY test will also error out and default back to the Y111 test Haplogroup if there are is not a matching SNP group under it in their version of the tree (i.e. in this case R-M269 or to the VERY broad and incorrect 'F' Haplogroup group). I have had this occur multiple times now as I have done multiple BigY tests and had to work with ftDNA to correct it.

6
After a Big-Y test on FamilyTreeDNA does it make sense to order further SNP tests?
5
If you plan on getting a Big Y test, is there any value in going beyond yDNA-37?

7
How to interpret a reasonable X DNA Match, but no shared cM Autosomal result on GEDMatch?
9
My Father passed away - next test(s) on what remains of his DNA sample?
5
If you plan on getting a Big Y test, is there any value in going beyond yDNA-37?
3
Explaining and interpreting YFull raw data statistics?
7
Converting AncestryDNA 1.0 file format to 2.0 and vice-versa?
6
After a Big-Y test on FamilyTreeDNA does it make sense to order further SNP tests?
1
How distant should cousins be before a Big-Y test is helpful?
5
Phased psuedo-kit on GEDmatch -- what accounts for huge drops in SNP count?
6
Working with DNA results for multiple profiles across multiple sites