What does huba mean in this Polish Catholic marriage record?

I got my hands on a marriage record from Poland. 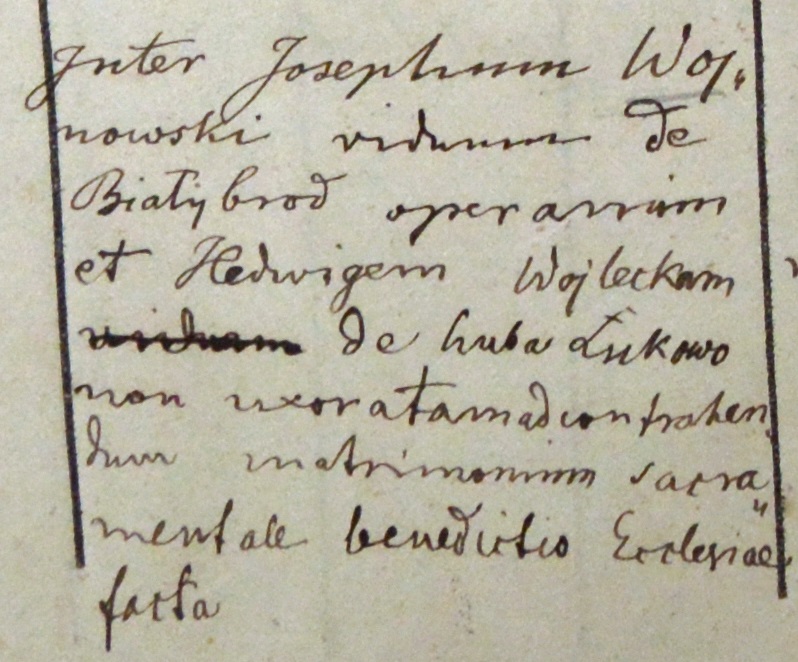 It's written in Latin. Here's what I divined with the help of Google Translate:

Among Josephus Wojnowski widow of Bialybrod operating and Hedwiga Wojtecka of huba Lukowo, not his wife, contract this marriage, a sacramental blessing of this church.

My question is what the word huba is and what it means. It precedes the name of the bride's village. I thought maybe it would be village, city, or town but it's not any of those. huba doesn't appear to be a Latin word. It does mean mouth, fungus, or mushroom in Slovak, but that's clearly not relevant to this situation.

Between Joseph Wojnowski, widower of Bialybrod, laborer, and Jadwiga (or Hedwig) Wojlecka, of the estate of Lukowa, not his wife, to contract a marriage, a sacramental blessing of the church

Huba is not Latin, but (probably) latinized German*, related to 'Hube' [old land measure] and 'Hof' [estate or land-parcel]. Used above to distinguish the estate of Lukowa, from the other Lukowas, of various sizes and administrative status, in the region.

*possible that there are Polish words derived from similar roots

4
What does it mean for woman to have the title of Mistress in a marriage record?
4
List of Sacraments on Catholic Death Register doesn't include Marriage
2
What are the names of these Polish villages?
4
What Polish village is named in this document?
2
Is there a Polish variant of the name Thillmann, and what does this name mean?
3
What does NFP RC mean in marriage record of Virginia 1799?
5
What is German translation of this Marriage record written in Kurrent?
4
What is being recorded in this Latin church vital record?
6
What is the parenthetical phrase in this Irish baptism record?
1
What does branobilis/braenobilis mean?