Minimum age to be mentioned in a will?

Edward Penny died in 1824 in New York. A brief abstract of his will is as follows:

I'm looking for Voleny Marvel. First of all, I'm quite sure his last name is actually Marble, and I've seen this in a few other sources about his name. I don't have a birth date for his mother, Esther, but I do know she was born between 1778 and 1782. What I'm trying to figure out is if I can get an idea of Voleny's birthdate based on the fact that he was included in the will. 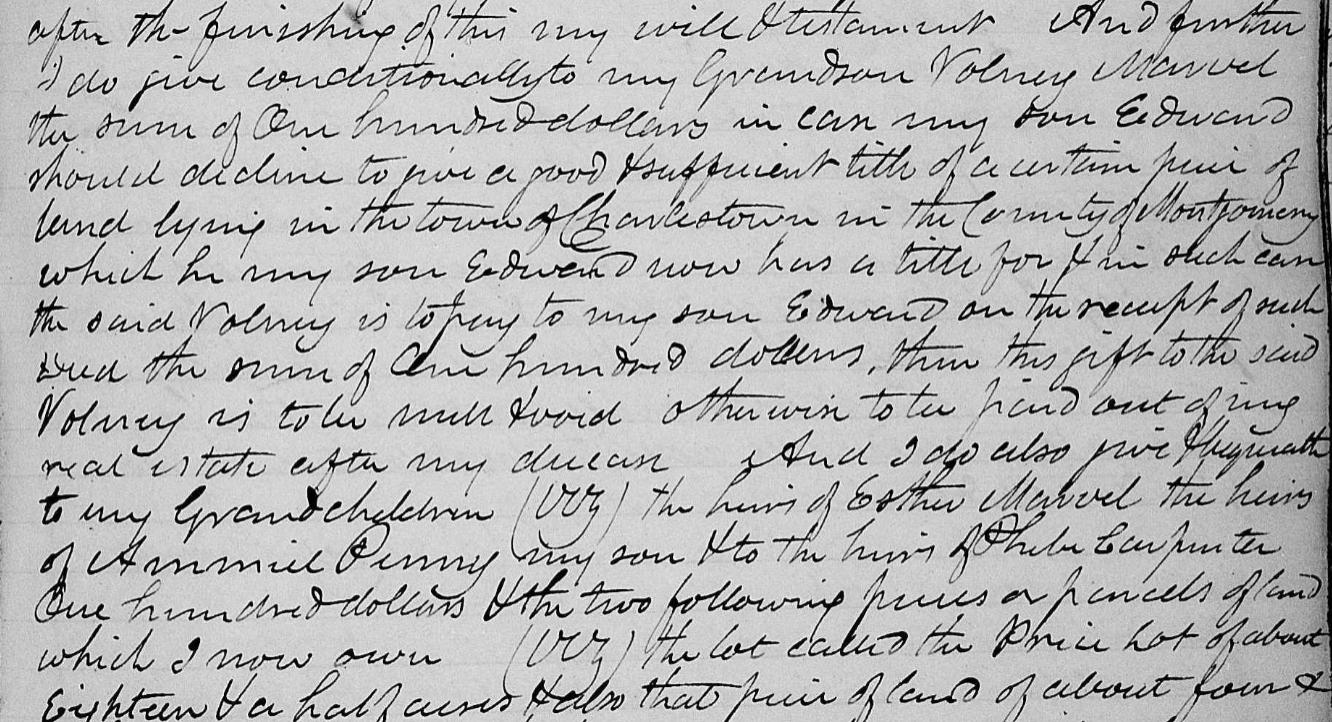 And further I do give conditionally to my Grandson Volney Marvel the sum of One hundred dollars in case my son Edward should decline to give a good & sufficient title of a certain piece of land lying in the town of Charlestown in the County of Montgomery which he my son Edward now has a title for & in such case the said Volney is to pay to my son Edward on the receipt of such Deed the sum of One hundred dollars, then this gift to the said Volney is to be null & void otherwise to be paid out of my real estate after my decease.

A will may or may not stipulate how the bequest should be handled in cases where the legatee is a minor. In those cases, the legacy may be paid out, for example, at age 21 or at marriage, but if no such details are included, then it is impossible to estimate the age of the legatee based solely on the fact they are mentioned in a will.

In my opinion, the wording of the will suggests that Volney is perhaps an adult or close to adulthood, but unfortunately there are no real indications of his age.

Not the answer you're looking for? Browse other questions tagged united-states 19th-century new-york-state will probate-process or ask your own question.

13
What does “Effects under” refer to on proving a will?
3
Genealogical records from Rensselaer county?
2
What happens when a last will and testament enters probate?
1
How to interpret hand written will that refers to children and possibly in-laws?
5
Looking for Canadian Pacific Railway worker James Edward Allan/Allen, believed to have died in Canada/USA about 1925?
4
Understanding 1807-1812 Pennsylvania land records document?
7
How to tell if a will was executed as written?
6
Would a Wife be mentioned in 18th Century English Will?
2
Transcription of an 1835 will entry in Prerogative Court of Canterbury Wills record