Until what age did little boys in the early 1900s wear dresses?

I found a family photo from 1910. Someone wrote on the back that it was four sisters and a baby brother from my uncles and aunts. But that wouldn't work for the ages of those particular children. I suspect that two of the children identified as sisters are actually brothers. That would work better in the family time line. But they are clearly wearing white dresses and appear to be 4 or under, possibly even age 5. I know that American boys at the turn of the 20th century wore dresses, especially from upper-class families, until a certain age. When did such boys transition to pants and shirts?! Here is an early photo approximately 1911 to 1913. 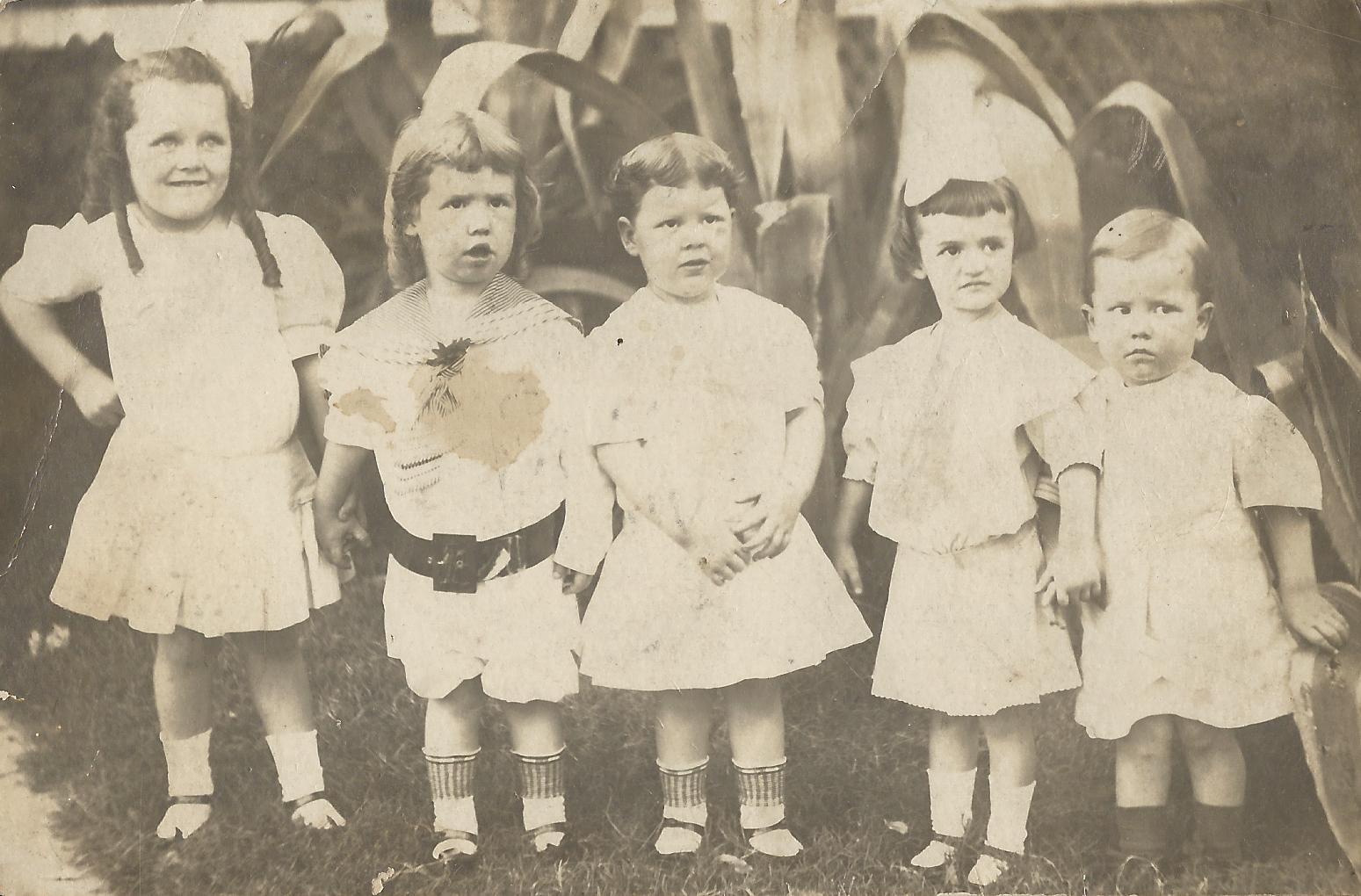 Here is a second photo showing kids that match the ages and sexes of the family. 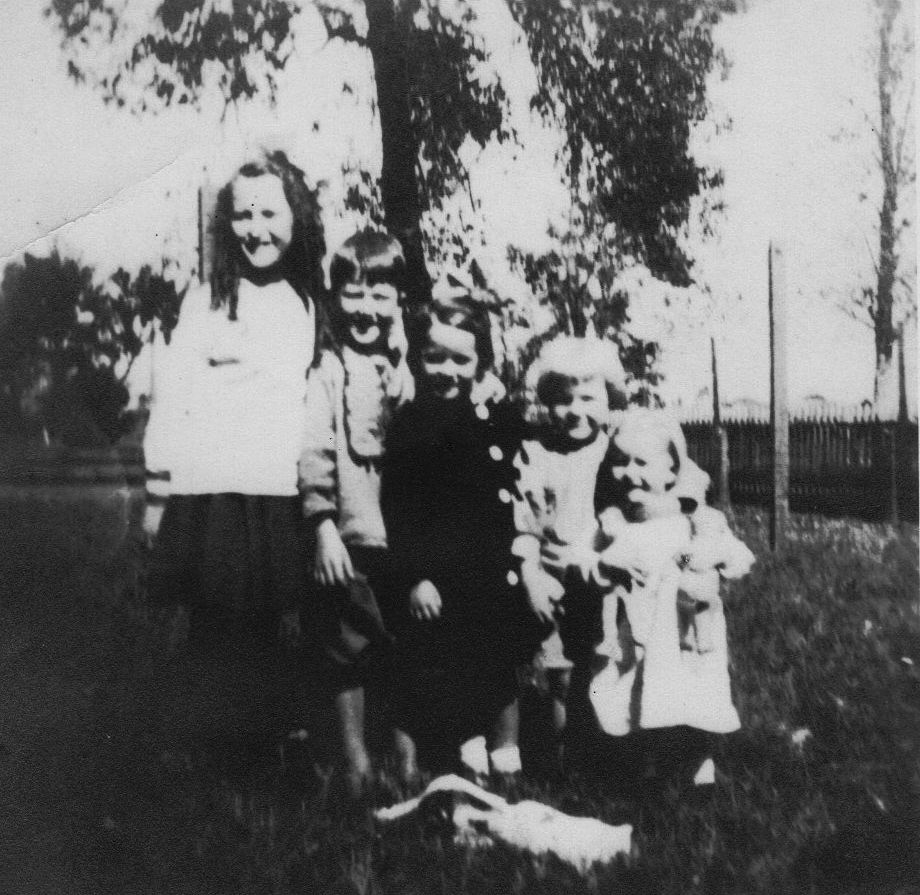 . The order should be a girl born in 1905. The next in line was a boy born in 1908, then a girl born in 1910, and a boy in 1911 and a girl in 1913 (plus others later). These photos were taken in Adrian, Georgia. I think that the oldest girl in both photos is the same, my Aunt Dorothy. But the "girls" next to her I think are really boys, as is the one on the far right. I'm not convinced that the little girl with the angry look is a relative.

Jo B. Paoletti, Associate Professor of American Studies at the University of Maryland, is the author of Pink and Blue: Telling the Boys from the Girls in America, recently published by Indiana University Press. She discusses the transition from dresses to more gendered clothing throughout the entire book, but for the time period you are looking at, I recommend reading Chapter 2, "Dresses are for Girls and Boys".

This quote refers to research Paoletti did in UCLA's collection of completed baby books, following a long discussion of the transition from long dresses for newborns (longer than the child's toes) to short dresses:

During the same twenty-year period, skirted styles for toddler boys also disappeared. Some authorities laid out strict rules for dressing, according to age. Vogue in 1900 outlined the stages of boy-dressing very specifically: long dresses until six months, then short dresses up until age three, then either Russian blouses with knickers or kilt suits up until the age of five or six. Harper's Bazaar noted that boys were usually put into trousers "as soon as they were too old for baby frocks" at about three years. Despite this advice, toddler boys photographed between 1890 and 1910 and boy paper dolls were increasingly less likely to be wearing skirts and more likely to be wearing knickers.

Paoletti says that by the 1920s boys were 'nearly always' wearing trousers.

Earlier in the chapter, Paoletti discusses subtleties in details of the clothing -- the design of the bodice, or pleating of the skirt -- for the period before the turn of the century. An expert on children's clothing of the period might be able to pick out clues in the details and handwork of the clothing that more modern readers would miss.

You might be able to get some clues by searching for photos in the collections of the National Archives, state archives and libraries, or your local library. If you want to find other scholarly reference works on dating children's clothing, try Google Scholar or JSTOR.org, or check WorldCat.org.

Keep in mind that in some cases, children could be wearing heirloom garments that have been passed down in the family, so the garments could be older than the photo. But several websites and bloggers say that the end of World War I is the delineator for boys' skirted suits -- which makes sense, given the other cultural changes that were happening at the time. 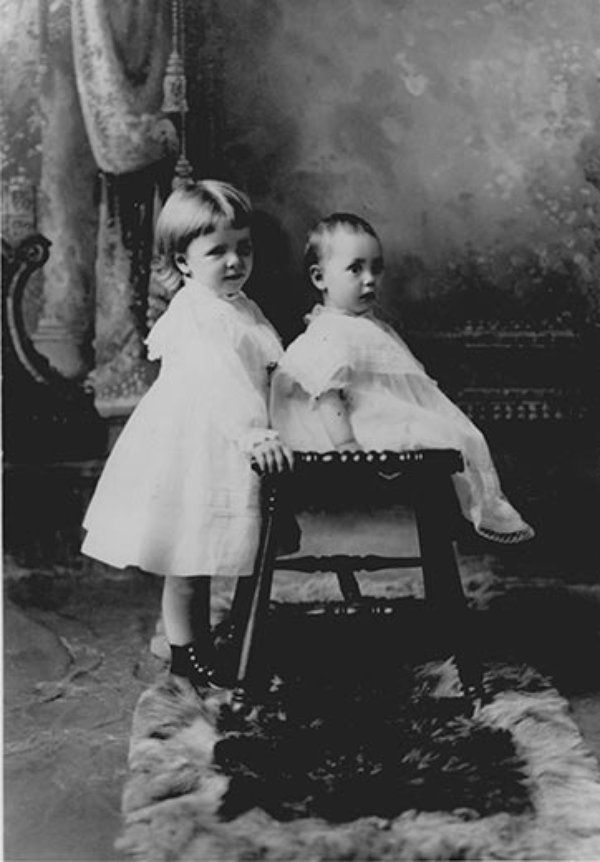 Boys typically wore dresses until they were reliably potty-trained (about age 3-1/2 to 4). Mainly because the buttons and fasteners of the day were cumbersome and time-consuming while trying to get at a leaky cloth diaper.

Modern zippers began appearing in children's clothes in the late 1920s, and boys graduated to pants when they started crawling.

Not the answer you're looking for? Browse other questions tagged united-states photo-identification photo-dating georgia-usa or ask your own question.

3
Dating and identifying Penzance photos – are they of George and Fanny Wills?
5
Could photo be Edward Nettell (1812-1879) and Maria Hocking (1811-1902) of Illogan, Cornwall?
5
Identifying Australian soldier named Williams in World War I photograph (1917)?
7
What uniform is this (US Army branch, where and when)?
5
What year does this toy tricycle appear to be?
4
Identifying person in two 19th century photos (one from Hannover)?
6
What is date of the photo of woman with wrist watch?
2
Finding person by birthdate alone