It is well documented that Thomas Jocelin/Josselyn/Joslin/Jostlin (1592-1660) emigrated to the Massachusetts Colony on the Increase in 1635 with his wife Rebecca and children Rebecca, Dorothy, Nathaniel, Elizabeth, and Mary.

Ralph Josselyn [the author of the diary] belonged to the ancient family of Josselyn whose name is supposed to be connected with the town of Josselin in Brittany, the head of the senior branch of which is the Earl of Roden. There was a Ralph Josselyn of Roxwell in Essex, yeoman, whose will was proved on May 4 1632; he had seven sons of whom the eldest was John. John Josselyn was born about 1583 and died in 1636 and was the father of the author of the diary; he had six other brothers one of whom, Thomas emigrated to New England in 1635; and in Dr Shaw's "History of the English Church during Civil Wars &c" will be found the names of other members same family.

If I read this correctly, this implies that Ralph Josselyn of Roxwell in Essex was the father of the Thomas who emigrated.

On the other hand, "The Joscelyn-Joslin Family" by Laura Elmendorf Skeels in The Journal of American History (1912), says (p. 528):

Thomas Jocelyn or Joslin, eldest son of Sir Thomas by his first wife, Dorothy was born about 1591. He sailed from London in the good ship Increase April 17th, 1635, for the Colony of Massachusetts, with his wife, Rebecca...

This article does not include citations.

I am further confused by a 1917 article from The New England Historical and Genealogical Record, which, on pp. 250 and 253, shows Thomas being descended from apparently the same Ralph of Roxwell, co. Essex, yeoman, who died in 1631/2: 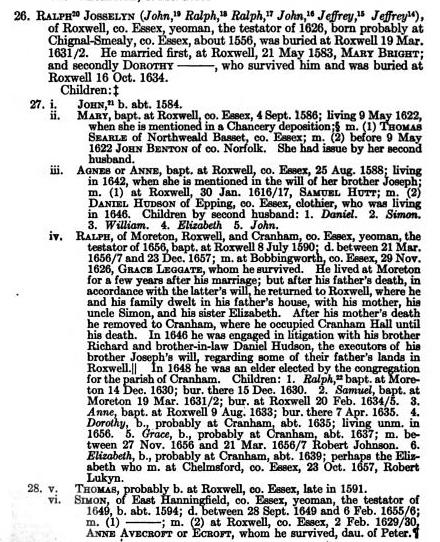 Here's a transcription of the footnote:

In 1886, Mr. William M. Sargent communicated to the REGISTER (vol. 40, p. 293) the conjecture of a member of the Josselyn family of Ipswich, co. Suffolk, Eng., that Thomas Josselyn son of Ralph [26] of Roxwell, co. Essex, was identical with the Thomas Josselyn who emigrated to New England in 1635. This conjecture however was at that time unsupported by proof and the member of the family who made it admitted also that he could not trace "the origin of this branch of the Josselyn family nor its connection if any with the Torrel's Hall branch."

This footnote seems to contradict the earlier part of the page, which claims that the Thomas who emigrated to the New World (died at Lancaster, Massachusetts) is the son of Ralph [26].

Any idea how I can sort this out?

More recent analysis is in The Great Migration, volume IV. Robert Charles Anderson there gives a good summary of the evidence, too lengthy to repeat here (a 5-page entry for Thomas Joslin). But he does conclude that his father was Ralph.

Not the answer you're looking for? Browse other questions tagged england new-england information or ask your own question.

5
Ancestry of Christian Penn (d. 1684; m. Francis Eaton, then Francis Billington, both of Mayflower)?
14
Locating New England telegraph man (Lemuel Keyser Preston) ca1850?
5
Researching photographers in England and the UK
6
Why would a family baptise at a parish but not marry or bury there?
10
Who are the parents of George Juden?
8
Finding an elusive ancestor after the 1901 census (who may have deserted his family)
3
Looking for death of Thomas James Murdin, last sighted in 1934 in Camberwell, London?
1
Is Saisy a known 19th century Irish/English nickname for Sarah?