From Finding birth/baptism/marriage record for Priscilla who married printer Henry Hughes probably about 1810 in Breconshire, Wales? I know that my Hughes ancestors included three prominent printers in Brecon, Wales:

On 9 Feb 1820, in the Hereford Journal, Henry advertised a house to let at Wheat Street, Brecon. He was recorded as being a Printer of Struet, Brecon. 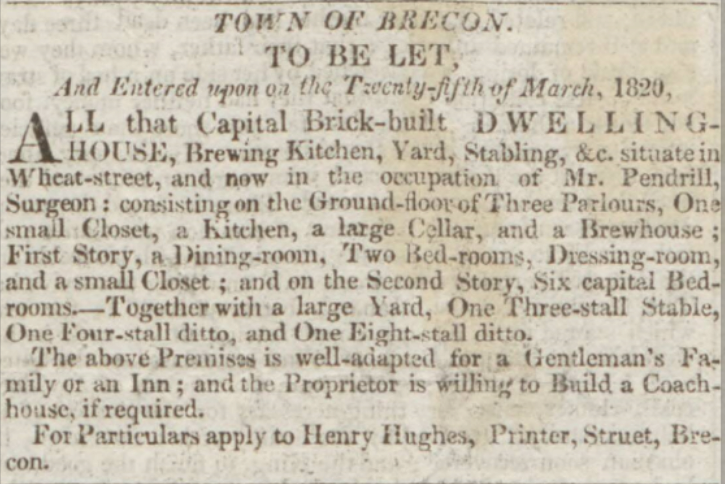 I am not sure whether this was a property owned by Henry, or simply one in which he was acting as an intermediary for its letting, but, in any event, I suspect that the Hughes family would have had assets to do with their printing business that would have meant wills and probate were likely.

However, I have not found a will or probate for any of the three. Some of their output as printers seems to be present in the National Library of Wales but I have not found their wills/probate there.

Am I overlooking a likely source for any possible wills/probate of theirs? Would the two Henrys both dying aged 39 mean that they might not yet have been thinking about what happened after their deaths? If they died without wills, would there be letters of administration somewhere to enable the assets to be handed on?

The eldest son of Henry John and Priscilla, also called Henry (ca 1809 - 1892) was also a Printer and Stationer, at first in London, but mostly in Trevithin/Pontypool, so I am assuming that the printing assets must have passed to him.

His own probate, on 9 May 1892, was granted to his sons Henry (newspaper proprietor and publisher) and David Williams (printer and stationer).

There are a limited number of places that a will would be located for these individuals. If you cannot locate one after ruling out all the options below, it would be reasonable to conclude that they did not leave a will.

Before 1858, almost all wills in England and Wales were proved in ecclesiastical courts. The court in which a will was proved is based on the place where the deceased died and where their estate was located. A guide to locating wills for ancestors in Brecon was published many years ago by the LDS: Welsh Probate Jurisdictions – South Wales and Monmouthshire.

Brecon was in the Archdeaconry of Brecon, which was in the diocese of St. David's, which was in the province of Canterbury. Therefore the stepwise process for locating a will should be to search the following courts, typically starting at the lowest-level court:

In some cases determining which court had jurisdiction may be complex. For example, a person with estate of value of more than £5 in two dioceses of the province of Canterbury, would be proved in the PCC rather than a diocesan-level court. If your ancestors had property in both Breconshire and London, or if they were very wealthy, then PCC would be most likely. Given PCC is easiest to search – these wills are fully indexed by The National Archives, Ancestry.co.uk, and TheGenealogist.co.uk – it may actually be the best starting point. Unfortunately your Hughes don't appear in the PCC indexes.

Probate was granted in a local court for the vast majority of people. The Archdeaconry court is most likely where you will find wills for the Hughes, if they exist. There is no complete index available online. For those who cannot make it to the National Library of Wales or Powys Archives, you can order films potentially containing the records from FamilySearch.

For the Archdeaconry of Brecon, the following film collections will be of interest:

Some wills for Brecon residents are indexed in the Powys Archives Catalogue. I cannot see any for the individuals you mention, however the catalogue is not complete. If you contact Powys Archives they may be able to do a search of their indexes for you, enabling you to order a copy of any documents of interest.

After 1796, estates that were worth more than £10 were liable to death duties. Records of these duties were maintained, and a register of death duties is searchable on FindMyPast: Index To Death Duty Registers 1796-1903. If probate or administration was granted for an estate on which death duty was levied between 1796 and 1903, it should appear in these indexes. More information about these records can be read in this article by TNA: Death duties 1796-1903: further research.

Keep in mind that there may simply be no wills or administrations for these people. It may be true that they ran a successful printing business, but if their affairs were straightforward there may have been no need for their estate to go to probate. When searching, also note that probate or administration may not have been granted in the year a person a died – in some cases it took several years, even decades in rare cases, to get everything in order.

Not the answer you're looking for? Browse other questions tagged 19th-century 18th-century wales probate-records breconshire or ask your own question.

5
How to order copies of English wills (post-1858)?
4
Finding marriage record for Priscilla who married printer Henry Hughes probably about 1810 in Breconshire, Wales?
1
Proving Jane Middleton of Somerset only Next of Kin in 1872 to Thomas Chichester who died 1838 in Guyana?
1
Finding identity of Eliza Ann Wills who witnessed marriage of Grace Martin Wills and Matthew Nettell in 1865 at Redruth, Cornwall?
2
Determining surname for 1782 baptism in Breconshire, Wales?
4
Finding birth/baptism record for James Chichester who died 1858 in British Guiana?
5
Reading words on old document relating to share of Will?
3
Understanding Index to Death Duty Registers 1796-1903 for 1799 death in Radnorshire, Wales?
5
Determining a relationship from the 1871 census?
1
Finding records for founding of printing firm of Messrs. Hughes and Son, Ltd. at Becon, Wales around 1802