Explaining migration around 1800 between Somerset, Devon and Dorset?

My 3rd great grandmother Priscilla Chichester was born illegitimate on 22 Sep 1796 and christened on 16 Oct 1796 at Branscombe, Devon:

Robert Chichester married Martha Noake on 13 Apr 1797 at Branscombe, and they had four more children:

In 1804, Robert (and presumably his family) appears to have been leasing Chamberland’s Farm, at Wool, Dorset, from Thomas Sabine, which suggests he may have been a farmer or farm labourer.

As you can see on the map below the three known locations of their children's births are quite some distance apart (about 50 miles, as the crow flies, an much more by any roads).

Why might Robert have first been at Branscombe, and then why might he and Martha as a couple have migrated between Branscombe, Old Cleeve and Broadwey/Wool (before returning to Old Cleeve where they were buried at Leighland Chapel)? 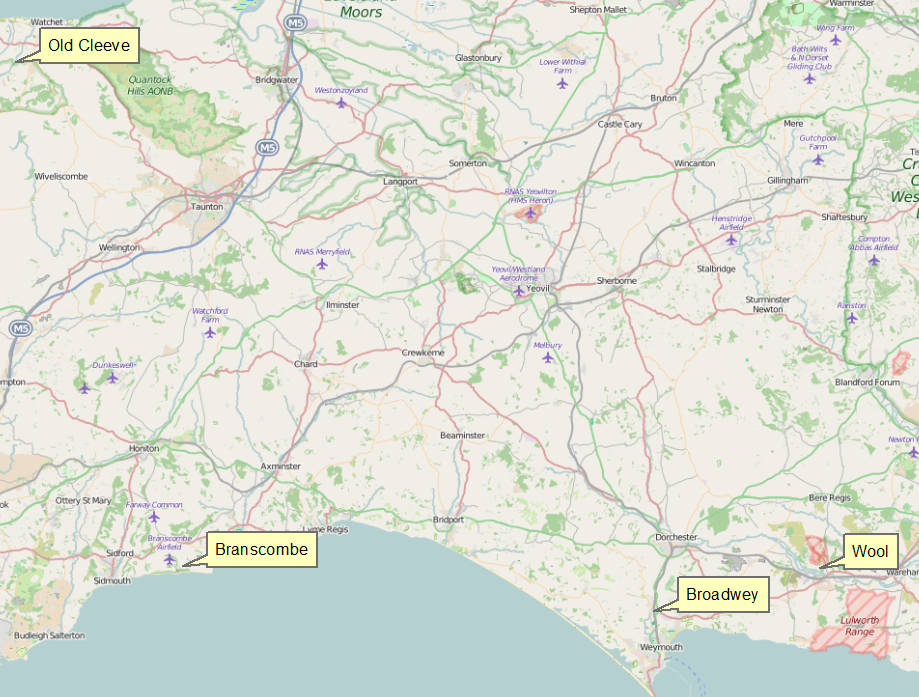 I grew up in that part of the world and can trace a remarkably similar migration pattern between Somerset and Dorset in my ancestors - particularly Gillingham, Wiveliscombe and Old Cleeve. Much of what I have learnt comes from local history handed down in the family and by visiting farming museums in Somerset (particularly this one in Glastonbury).

18th Century farming in the West Country employed a large number of semi-itinerant labourers. While tenant farmers clearly stayed on their tenancies, the labourers would move to where the work was, following an annual cycle.

There were, indeed still are, different forms of arable farm along with dairy on the moors and sheep on the hills. This meant that the peak workload, lambing, harvesting, ploughing, etc. took place at different times in different locations. Also, driving livestock to the larger markets such as Yeovil and Bridgwater was seasonal. Farmers would, and still do, take on casual labour at these times. Many labourers followed the work.

Most labourers would have a fixed home where they brought up their family but could be away from home for months at a time. Others would take their families with them. Most, it appears, would seek to settle as they got older and had more family responsibility. Taking a tenancy or more permanent work if they could find it.

All this provides the backdrop to movement of people around the counties. Resulting in children, some illegitimate, being born in various places.

You will be able to track down various books on the history of farming in Somerset and Dorset to go into this further if you wish.

I can partially answer my own question.

The reason for Martha and Robert being at Broadwey appears to be that three of Martha's siblings (John, Rachel and Ann), and later her mother (Martha nee Derriman) lived there.

It may be particularly relevant that her younger sister Rachel had two illegitimate children, in 1800 and 1801, christened at Broadwey so perhaps Martha and Robert moved there to provide her with family support.

What remains to explain is why Martha's parents (Israel and Martha) who were both baptized at Longburton, Dorset, came to be living at Branscombe, Devon at around 1796 which put their daughter Martha on a path to meet Robert Chichester (of Old Cleeve, Somerset). Israel was a yeoman and farmer-tenant so perhaps he and Robert came to be working the same or nearby land. 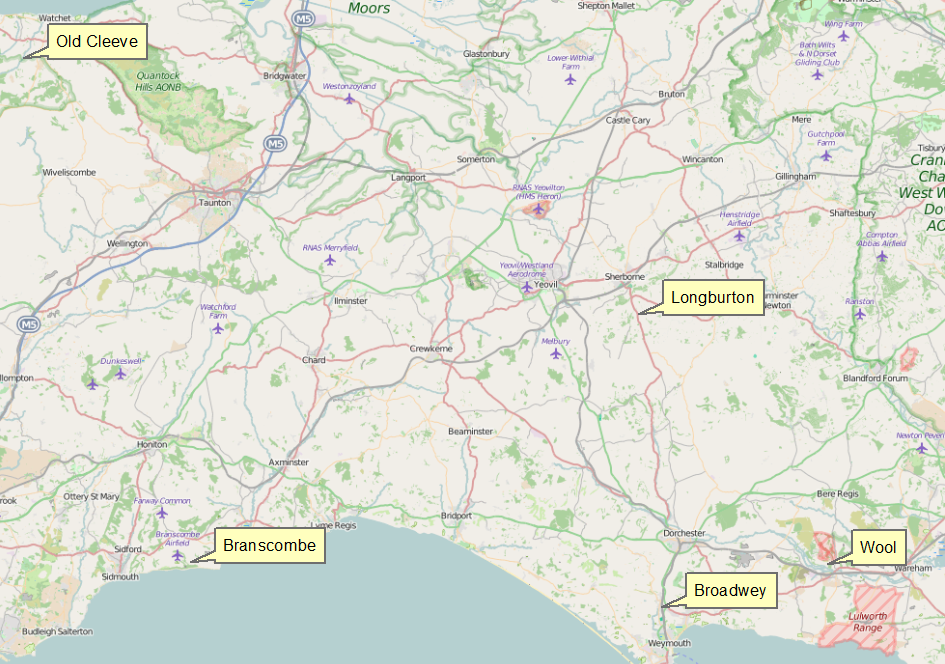 Not the answer you're looking for? Browse other questions tagged 18th-century devon somerset migration dorset or ask your own question.

6
Mary and Mally: were they used interchangeably in Yorkshire in the late 18th century?
6
Determining maiden name of Alice who had eight children (1744-1762) with William Sellick christened at Stogumber, Somerset, without marriage record?
5
Where to find Will of Giles Chichester from 1820s, probably in Somerset or Guyana?
1
Proving Jane Middleton of Somerset only Next of Kin in 1872 to Thomas Chichester who died 1838 in Guyana?
1
Where is/was location of Balintuger, Fife, Scotland?
4
Could John Stacy who lived/married at London and later lived at Exmouth (Devon) have been baptized in 1759 at North Petherton (Somerset)?
2
Interpreting "married by Licence as I am credibly informed" on 1732 Gloucestershire marriage record?
5
What was surname of Susan/Susanna, wife of Edward McDowell, from Devon area in abt 1800?
1
Identifying birth family of Elizabeth Chichester who married in 1799 at Old Cleeve, Somerset, England?