James Chichester was my great-great grandfather.

James Chichester was a native of Europe and an inhabitant of the County of East Demerara, British Guiana. James lived in Mahaecony, East Coast Demerara. (These details are written in his will.)

James was one of two brothers who migrated from Europe. It is believed his brother’s name was Edward Chichester.

George S. Chichester signed as witness to the will of James' son Charles James Chichester.

How could I try to find his birth and/or baptism record(s)?

I do not have any ship records for him travelling to/from British Guiana.

I have located the listing of the probated will of James Chichester from both Guyana records and the England & Wales National Probate Calendar. His brother Edward was listed as executor and swore oath to the authentication. I am enclosing a copy of the UK listing.

From the England and Wales, National Probate Calendar Index of Wills and Administration 1858-1966 I obtiained the second listing of James Chichester's Will. Here is a copy: 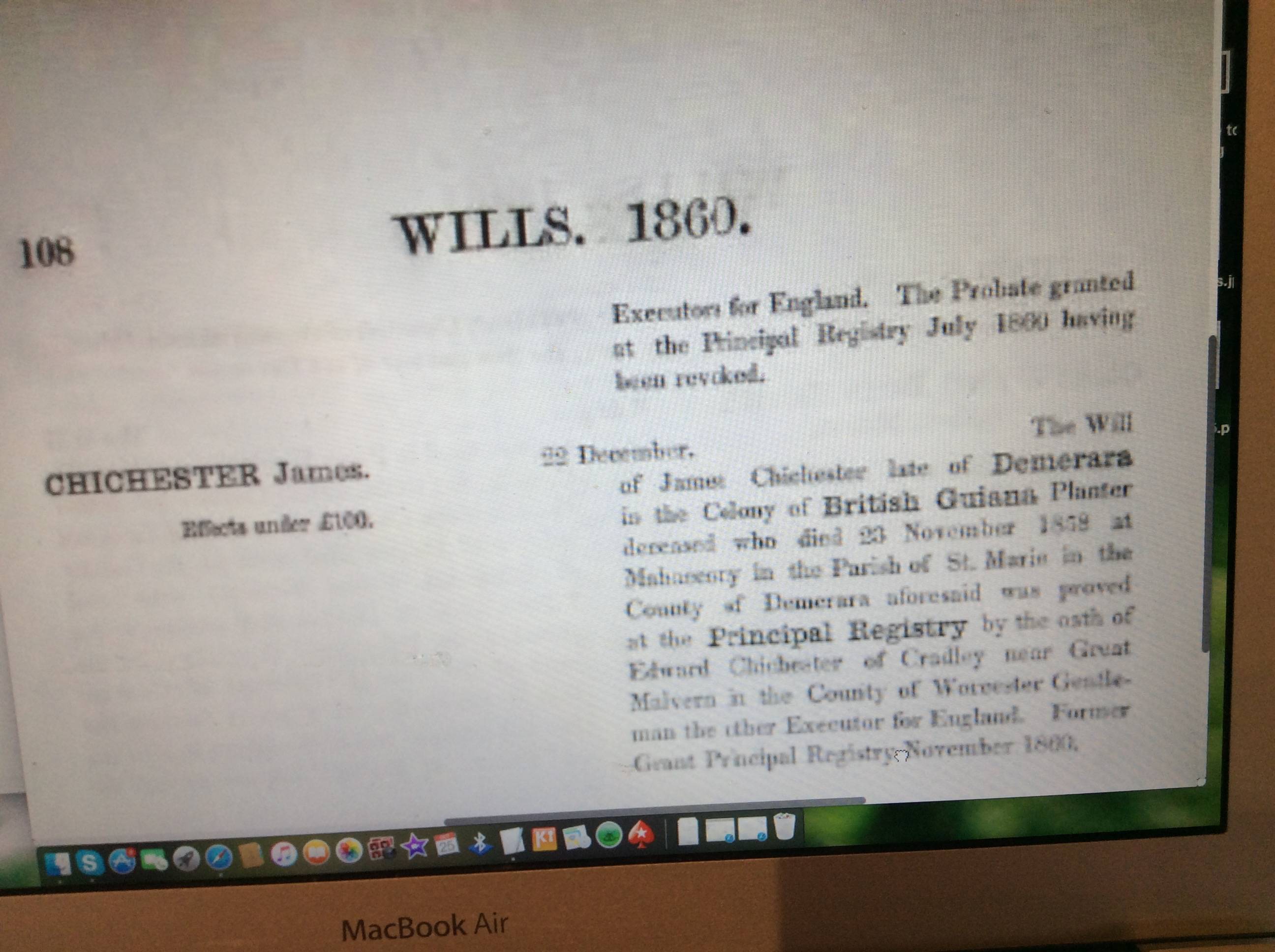 From the England, Wales National Probate 1858 - 1966 probate record that you added to your question, I searched FindMyPast for an Edward Chichester born within 10 years of 1810 (as a bit of a guess) and came up with an 1861 Census Record for Edward Chichester at Cradley which said that he was born in Somerset. This greatly interested me because my Chichester ancestors come from Old Cleeve in Somerset.

I then switched over to Ancestry.com and searched for an Edward Chichester born within 5 years of 1808 and found one baptised on 2 Nov 1806 to Giles and Ann. That census record only gave the location as being Somerset, but I recognized the names from the OLD CLEEVE BAPTISMS 1784 TO 1812 which record the same details.

Giles Chichester who married Ann Stenner on 10 Jun 1798 at Old Cleeve (see OLD CLEEVE MARRIAGES 1754 TO 1812) was a brother to my 4th great grandfather Robert Chichester who has been mentioned in several of my questions here.

The next thing was to find Edward's brother James (your 2nd great grandfather) which was easy via my Ancestry.com tree. Edward had two brothers named James:

As a footnote, Giles' brother, uncle to your James, was William Chichester and I already knew that two of William's other nephews (Jared and Thomas, and possibly their only other brother Giles; all sons of Robert) were with him at Demerara. However, I did not know that another nephew went there too.

Also, we were lucky to find Edward at Cradley because he lived abroad for many years, marrying Ann Maria (no surname given but baptism records of their children upon return to England show that it was Spicer) at Launceston, Tasmania, Australia on 25 Jun 1838 and having eight children there between 1839 and 1854 before having his last one born at Gloucester, Gloucestershire in 1855.

Not the answer you're looking for? Browse other questions tagged 19th-century england baptism-records guyana or ask your own question.

5
Where to find Will of Giles Chichester from 1820s, probably in Somerset or Guyana?

12
Finding New York birth record from around 1804?
5
How to order copies of English wills (post-1858)?
5
Where to find Will of Giles Chichester from 1820s, probably in Somerset or Guyana?
1
Proving Jane Middleton of Somerset only Next of Kin in 1872 to Thomas Chichester who died 1838 in Guyana?
4
Was William Chichester recorded as Judge in 1841 Census at Dymock, Gloucestershire, England?
2
Finding wills/probate for printers of Brecon, Wales who died in 1794, 1820 and 1839?
4
Identifying Robert Chichester listed amongst British Guiana Colonists?
4
Finding who owned/managed Yorkshire Hall Plantation in Demerara (Guyana) in early 19th century?
2
Did Richard Hill and Blanche Todd live in India in the late 19th Century?