What kind of a place name or institution is 'Mansfield Statutes'?

In transcribing an 1825 Settlement Examination from Mansfield, Nottinghamshire, the following line appears to read: William Brough "then hired at Mansfield Statutes to Mr. Milward of Epperstone for a year which he served."

An online search for "Mansfield Statutes" produced several 'hits' for Nottingham newspapers via British Newspaper Archive at Genes Reunited, but I don't have a membership.

Another 'hit' turned up an 1859 diary entry of David John at welshmormon.byu.edu: "4 Nov Went to Mansfield, "Statutes", and met Brothers Cook and Holmes there. We held a social party until 10 P.M. at Mrs. Warren's."

But then I also saw two similar references following that entry: "7 Nov Cook, Nelson, and myself went to the Eastwood 'Statutes'. We spent the evening in walking through the fair. "15 Nov Brother Cook, Sister Elizabeth Cook, and I went to the Loughborough Statutes, met Elders Nelson, ????, and many of the Saints. Held a party at Brother Thomas Henderson's house in the evening."

I have not come across the term before but found this in the Derbyshire Courier November 15, 1851: 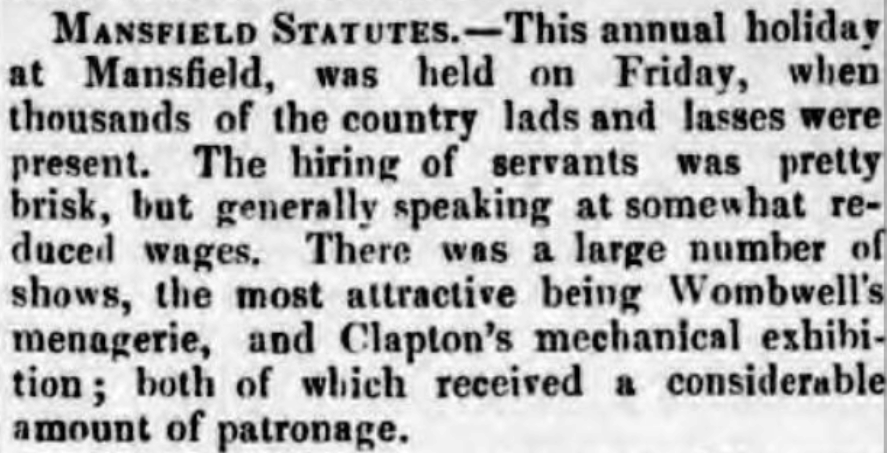 It sounds like an event rather than a place. In many other references to Mansfield Statutes (and other statutes like Bolsover Statutes) that I found there were often mentions of servants being hired so that seems to have been something of a focus for it/them.

I also found this at the GENUKI page for Mansfield:

The Statute Fair for the hiring of servants was held on the first Friday on November.

so it seems like hiring servants was its main purpose.

And from the Merriam-Webster online dictionary:

: an annual fair formerly held in English towns and villages for the hiring of servants and farm laborers

There is also some interesting context provided by @alephzero that I think should be captured within this answer:

There was nothing equivalent to modern transport and communication systems, and many of the servants, farm workers, etc being hired would be functionally illiterate. So instead of the modern "continuous recruitment" system, the standard contract for servants was employment for "a year and a day", and job-swapping was done by physically getting everybody in the community together on one day each year, usually after the end of harvesting, when the workload on the farms was low but the weather was still good enough to allow an all-day open-air "recruitment event" to be practical.

Some of these annual fairs have been in existence since the 13th century, and since they involved large scale public meetings, the ruling classes were naturally concerned about the possibility of insurrection, etc. Their dates and locations were therefore officially regulated (in some cases, by Acts of Parliament) - hence the name "statute fair", i.e., a public gathering which would otherwise be illegal, but permitted by a legal statute.

Since all the employers were physically in one place on the same day, it made sense to use the time for other things as well as recruitment - for example trading animals between themselves, as opposed to selling animals to be slaughtered for food which was obviously a regular necessity (e.g. at markets held once or twice each week).

Not the answer you're looking for? Browse other questions tagged england place-names nottinghamshire 1820s or ask your own question.

14
Validating place names that no longer exist?
28
How should place names be recorded?
7
Help needed reading an occupation and place name
12
Dixie Kiefer died on a mountain. Should I include the mountain's name in the place of death?
7
What records of smallpox vaccination exist?
4
Deciphering place name in 1841 Census for Tavistock, Devon, England?
4
If widow remarries, do English records ca 1820 show maiden name?
6
Is there any place like "Wertinberge" in Germany?
4
Finding place named St Lagille, France in 1914?