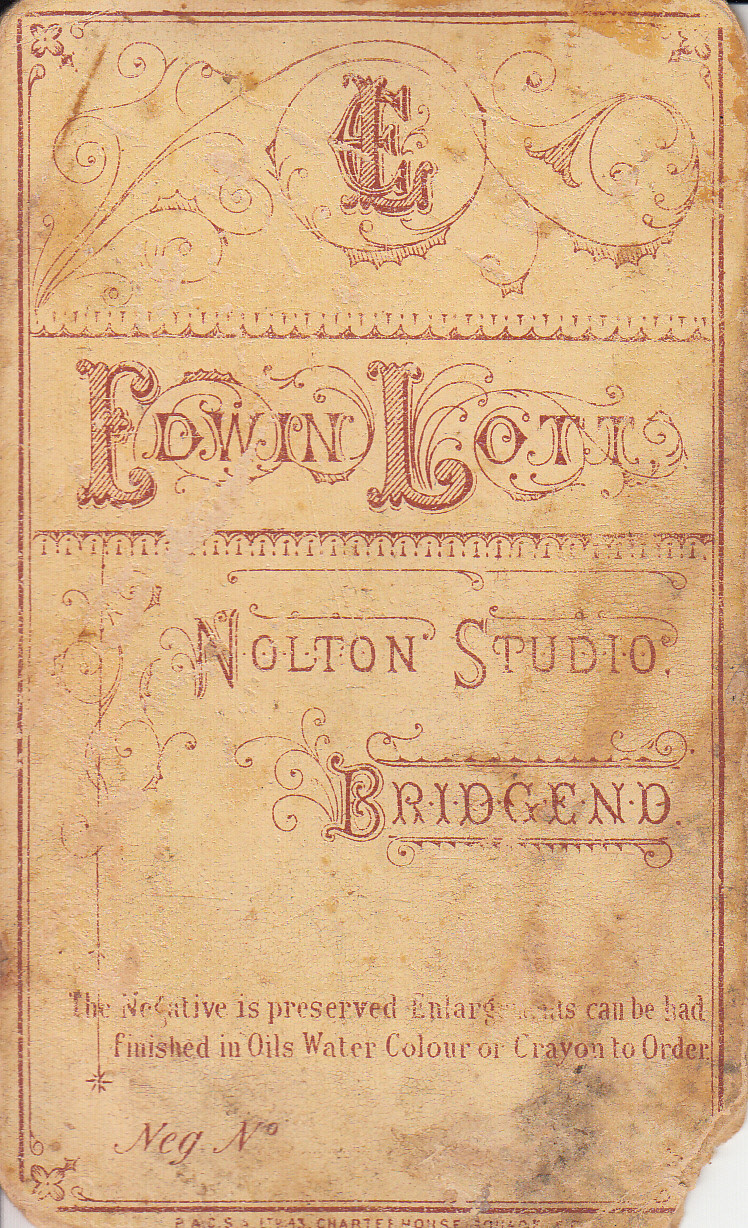 Does anyone know what years this image was used on Edwin Lott photos?

This was on the back of the unidentified family believed to be Morgan relatives which I posted in Identifying family in photo taken by Edwin Lott at Bridgend, Wales?.

To try and date the photograph I used information in Identifying photograph which may be Margaret Morgan (1808-1902) taken at Bridgend, Glamorgan, Wales? that I copied at the time from http://www.genuki.org.uk/big/wal/VicPhoto1.html. Unfortunately, the GENUKI website is in the process of being upgraded to a content management system (11 Oct 2015) but I found it available again at http://www.genuki.org.uk/big/wal/Occupations/VicPhoto1#GLA.

Edwin Lott labelled like this with the wording on your photograph's reverse side in bold:

Based on that the photo may have been taken 1891-1901, but taking account of the “gap years” above could have been 1885-1905. However, I do note that the appearance of the reverse in the photo at Identifying photograph which may be Margaret Morgan (1808-1902) taken at Bridgend, Glamorgan, Wales? is much more elaborate, mentioning being "Under Royal Patronage", and so I am wondering whether your photo may be another variant (possibly earlier).

Not the answer you're looking for? Browse other questions tagged 19th-century photo-identification glamorgan or ask your own question.

8
Dating/identifying a Duryea (mid-late 19th century) photograph from South Australia?
3
Identifying photograph which may be Margaret Morgan (1808-1902) taken at Bridgend, Glamorgan, Wales?
5
Could photo be Edward Nettell (1812-1879) and Maria Hocking (1811-1902) of Illogan, Cornwall?
9
What is uniform worn by Herr Schedler in photo taken late 19th century in Hannover?
5
Identifying Australian soldier named Williams in World War I photograph (1917)?
2
Proving parents of Thomas Morgan of Tre-bryn, Pencoed, Coychurch, Glamorgan, Wales about 1808 were Thomas and Ann?
6
What year is this photo likely taken?
3
When might this photograph have been taken and why?
4
Identifying person in two 19th century photos (one from Hannover)?