What did a Scientific/Philosophical Instrument Maker do and what other sources might be worth looking at?

My 2x Great Grandfather was Robert H Mason, born in 1858 in Romsey, Hampshire to Robert Mason & Ann Pearce. He came from a reasonably poor family where the majority of his siblings and cousins either followed in the footsteps of their parents as Agricultural Labourers or moved to London and mostly became Cab/Coachmen. Robert however, at 22 years old in the 1881 Census was working as a "Philosophical Instrument Maker" in Lambeth, England. He is listed on my great grandmothers birth certificate as "Scientific Instrument Maker" as well as in a probate record for him. Maybe he showed some sort of aptitude for this sort of thing in his early years and was inducted into an apprenticeship?

Perhaps there are apprenticeship records or similar guild records?

My question is: Where can I look for records relating to this profession and this man?/Can you find any other records of him relating to his time in work? And what kind of work would he have been likely to be doing at this time?

EDIT: I know he might have been a malnourished child and would probably have not fully matured so might not have been a very useful Labourer. This is a newspaper transcript of his fathers death, he was found dead in a river the younger brother mentioned by Henry Mason is Robert H Mason. 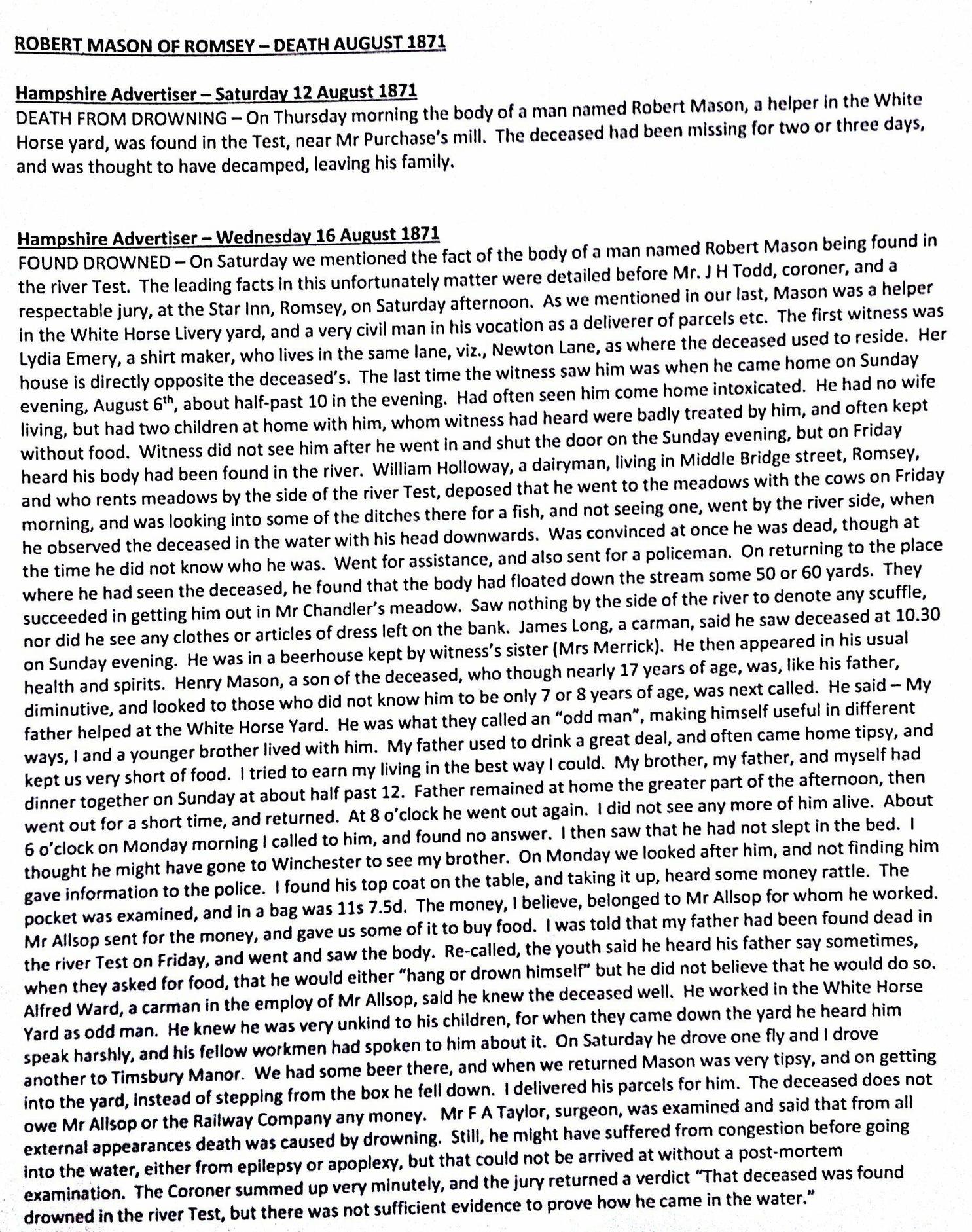 Firstly, Phthisis was the old name of tuberculosis, so your suggestion on that is correct.

In the 1800s, what we now always call science was more commonly known as natural philosophy. So a scientific instrument and a philosophical instrument would have been the same thing.

While I don't believe there was a specific guild for instrument makers, you could try looking at records from these other areas.

The basic principle in studying family history is always to start what you know and work outwards from there in small increments. If you have a street address from the 1881 Census, or at least a district, the first thing I would do is look into the history of London street re-numbering -- I would not assume that any historical address that I found could be dropped into Google Street View.

If you can find a period city directory or London newspapers close in time to the 1881 Census, see if you can locate companies that might have made instruments in London (comparable to The Cambridge Scientific Instrument Company). Advertisements or catalogs might give you an idea of what sort of goods were manufactured there, and you might be able to find photos in auction catalogs.

If your 2Great-grandfather worked for an individual researcher rather than a business, you might get a 'lucky dip' in a manuscript collection of that person's papers, or perhaps if he worked for a well-known firm, some business records might survive.

The National Archives (TNA) suggests looking in local archives. Museums that have collections of period scientific instruments might have research guides and finding aids.

This is the kind of problem where you have to go at it from multiple directions at once -- it's not likely to be a simple case of looking him up by name. But it can also be a lot of fun, learning about what instrument he might have created, even if you can't find out for sure.

Not the answer you're looking for? Browse other questions tagged england occupation apprenticeship-records employment-records or ask your own question.

7
Is FreeBMD complete for England in the 1880s? (Or, finding Annie Louise Deady)
4
Apprenticeship records for Ship Carpenters at Glasgow, Scotland in first half of 19th Century?
5
Finding birth record of Pierre Louis Oscar Cordier, Frenchman who married (1869) and died (1882) in London?
2
Who are the parents of Henry Charles Pynn?
4
Where is the Marriage of Milly Bungay/Mason/Weston to John Weston?
3
Where is the marriage of F. M. Weston/Mason to a Goodman?
4
Where is the 1911 Census record relating to Milly Bungay/Mason/Weston?
8
Where is Mary Elizabeth Richardson in the UK 1891 Census?
3
How to identify 19th century birth record in England when uncertain of parent's given names?