What uniform is this (US Army branch, where and when)?

I was going through some old photos and newspaper clippings that my grandmother (1913-2007) left behind here in Norway, when I came across this photo of a uniformed young man. To be honest I have no idea who it is, but I know she had an uncle who was born in 1888 and went to the US in 1907 (supposedly to Wisconsin), so that might be a link.

But could anyone tell from the uniform when this was, and also where he served? I see that the button on his collar says US 48. Could it be the 48th regiment or something? How does that match with him being born in 1888. 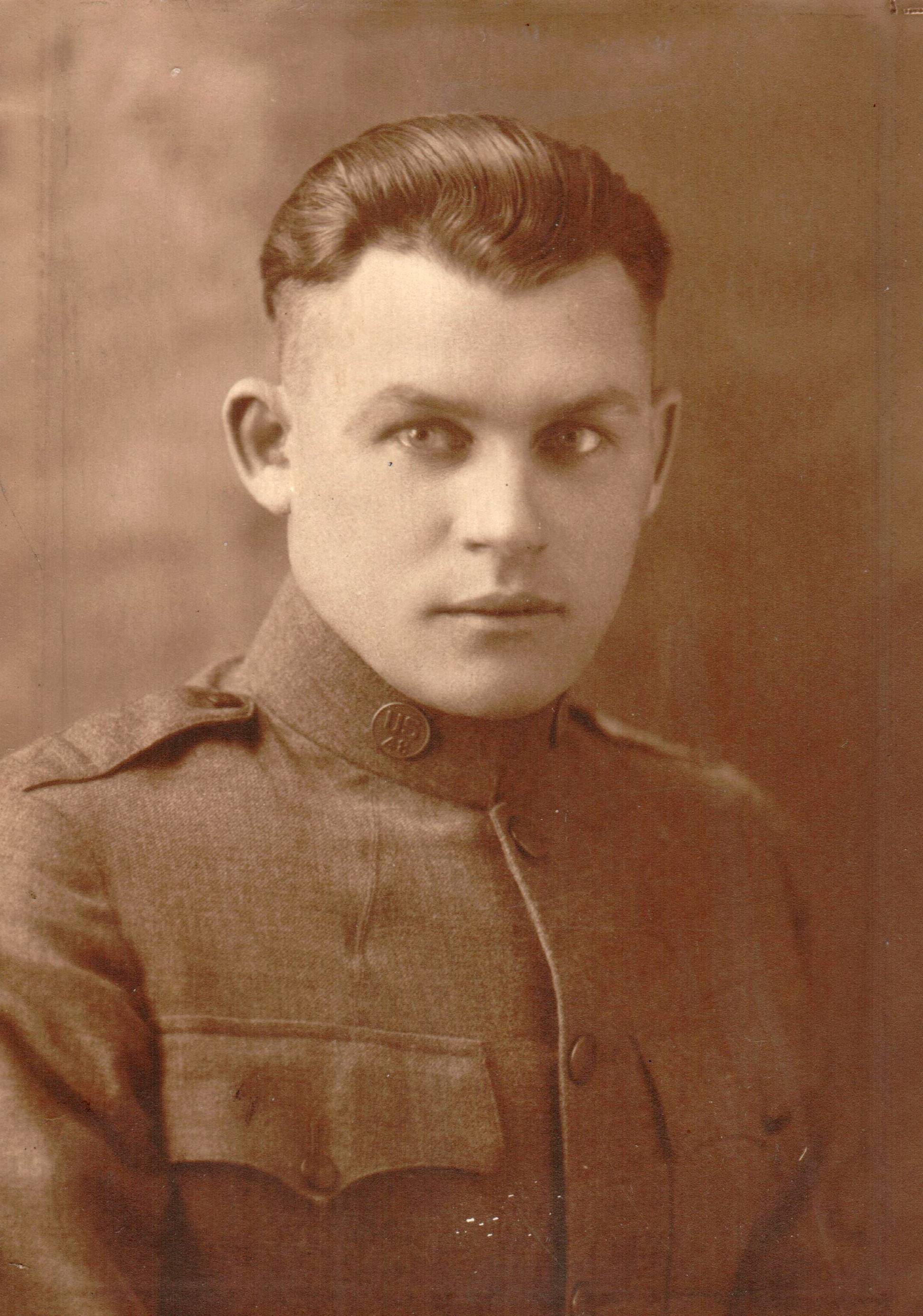 The uniform is from the time around World War I (see, for instance, World War 1 Uniforms and US Enlisted Uniforms 1900 - 1918: Part 2: Uniform Patterns (Enlisted) Army).

The uniform style doesn't indicate the branch of the U.S. Army.

The button is called a "collar disc", and the "48" is a unit number, either a regiment or battalion depending on how the particular branch of the Army was organized.

The collar disc on his left side (barely visible) would have indicated his branch, e.g. infantry, artillery, etc.

Well, building off of Robert Shaw's answer, it appears to me that the person in the photograph is wearing a Type I unit disk, which puts the photo somewhere between 1910 and 1937.

According to both the link in Robert's answer and this document - https://history.army.mil/html/museums/uniforms/survey_uwa.pdf - the regimental number (48 in this case) was moved to the right side disk in 1917. So we know this is photo is 1917 or later. The PDF I linked also suggests that the jacket pattern changed in 1926, and the collar on the resulting uniform lies flatter and is less stiff. So I would say this photo was taken between 1917 and 1926. Unfortunately, the left side disk, which we can't see, would have shown both the company (A, B, C, etc.) and the unit type (Infantry, Engineers, Medical, etc.), which would have been useful.

However, while no means comprehensive, an internet search suggest that the only likely unit that fits this timeline is the 48th Infantry Regiment. According to this regimental history from the U.S. Army Center for Military history (https://history.army.mil/html/forcestruc/lineages/branches/inf/0048in.htm)
(which is the source of the timeline in the Wikipedia article on the unit), the regiment was organized (meaning personnel were assigned to it) on June 1, 1917 in Syracuse, NY and was demobilized on July 31, 1922. It was part of the 20th Infantry Division, which never went overseas during WWI, so unless the person in the photo transferred to another unit, it is likely that they stayed in the U.S. during WWI.

So my best guess is that the person depicted belonged to the 48th Infantry Regiment, 20th Infantry Division, U.S. Army, and that the photo was taken between June 1917 and July 1922, somewhere in the U.S. If you can find a muster roll for the regiment during that period (there should be around 3700 soldiers in a U.S. Army regiment in the "square division" system of WWI), you might be able to see if any of the names seem familiar.

As part of your question, you asked:

How does that match with him being born in 1888?

Researchers can use these guides to line up a birth year with wars a service member might have been in:

Not the answer you're looking for? Browse other questions tagged united-states military-records world-war-1 photo-identification army or ask your own question.

6
Until what age did little boys in the early 1900s wear dresses?
9
Which British Army regiment did Thomas Stretch join as a drummer boy in 1774?
6
What can I assume from consecutive regimental numbers?
4
Identifying person in two 19th century photos (one from Hannover)?
4
What is the date and rank of this photo of a British soldier?
5
Researching German relative in WWI
6
Can this Verlustliste record be excluded or verified based on what (little) I know?
2
What uniform is this?