Where is the Friedrichsbruch near Kokotzko in West Prussia / Poland?

I hoping to clarify where exactly Friedrichsburg / Friedrichsbruch or perhaps a similar variant immediately close to Kokotzko Poland.

Per this document there were about 21 different variants of Friedrichsburg / Friedrichsbruch in Prussia.

I found in other records references and looking at some other individuals' trees that indicate Kokotzko, Culm, West Prussia as well which from the maps appears to be the same area of today's Poland almost on the Baltic Sea. 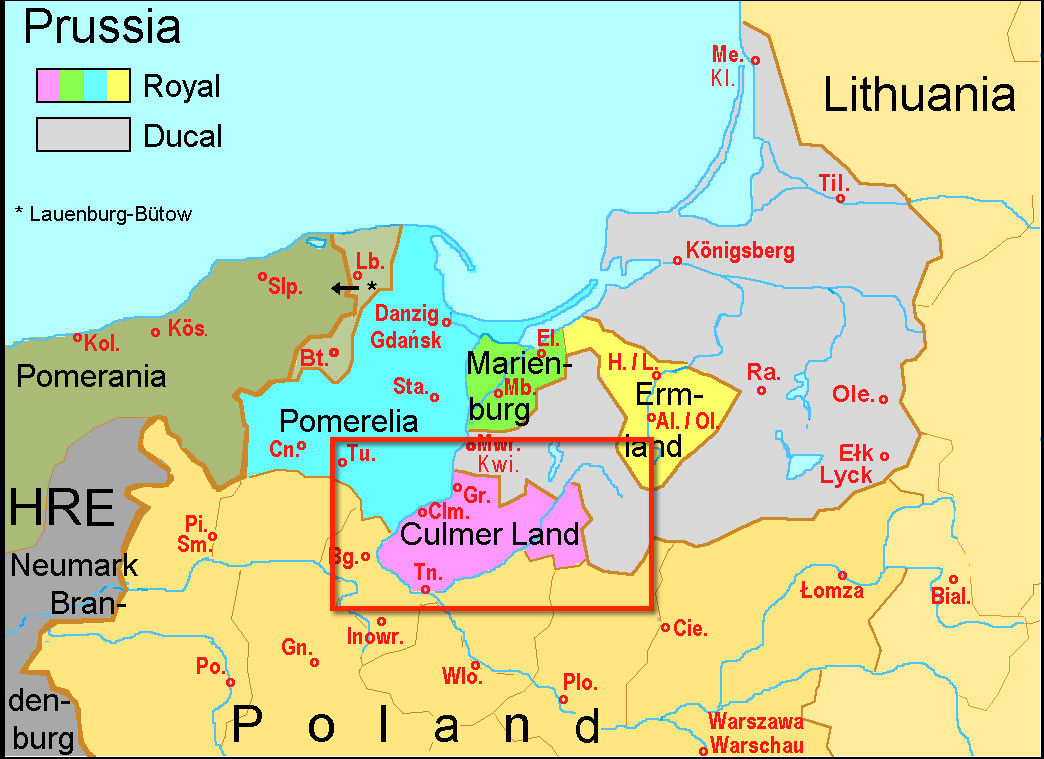 I see some people in their trees identify it on their map as the Fredricksburg near Brandenburg or Lower Saxony and list the country as Germany; which I do not believe aligns with the records themselves nor my particular chronology.

This record from the above links has helped narrow my search:

and I have found via a couple sources that Culm is now Chelmno and there is a Kockcko in the immediate vicinity between Chelmno and Unislaw but no Friedrichsbruch. 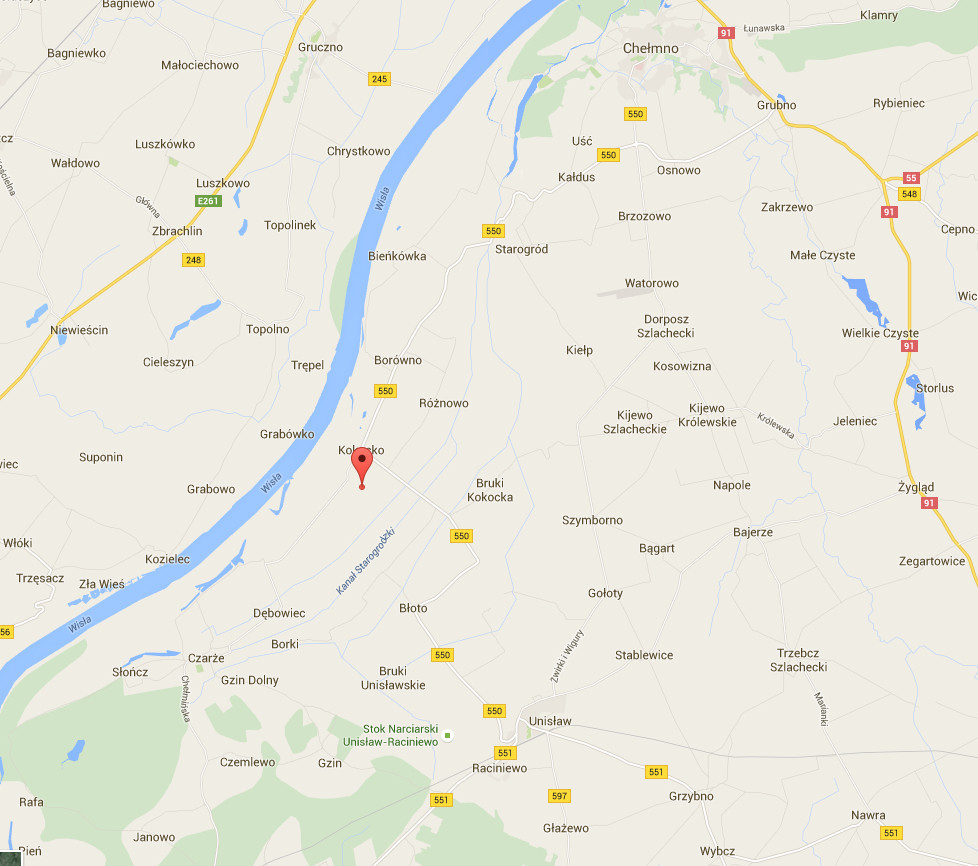 My specific records for the individual I am researching specifically says born in Friedrichsburg on 15 JUN 1864 , then it says they were christened a month later on 18 JUL 1864 in "Kokotzko West Prussia". The women the individual eventually married her and all of her family are also listed as from Friedrichsburg, West Prussia. At least a couple of their children were also born there as well.

I know where Friedrichsburg in Lower Saxony in what is today Germany, but the christening in Kokoszkowy, Poland (almost 900 km via today's shortest route) or Kokoszka,Chojnice, Poland (700 km via today's shortest route) a month later with a new born infant seem unlikely. There is also a Friedrichsbruch in Brandenburg that is approximately 250 K from Kokoszka in Poland and almost 600 km from the place in today's Czech republic.

There is a similar query I found on the web "Where is Cokotzky / Kokotzcÿ?" that does not end with a definitive conclusion but did have the following text referenced

I have also found a single vague reference on Wikipedia to Płosków in Złotów Co. Poland which is 70 km from Kokoszka, Poland and 110 km from Kokoszkowy, Poland, and 120 km from Chelmno and I do not believe is considered the Culm region.

I mapped some variants of Friedrichsberg (red) and variants / references of Kokotzko (yellow) and none seem to really align to Clum/Klum/Chelmno (green) and none are immediately close to the known location. 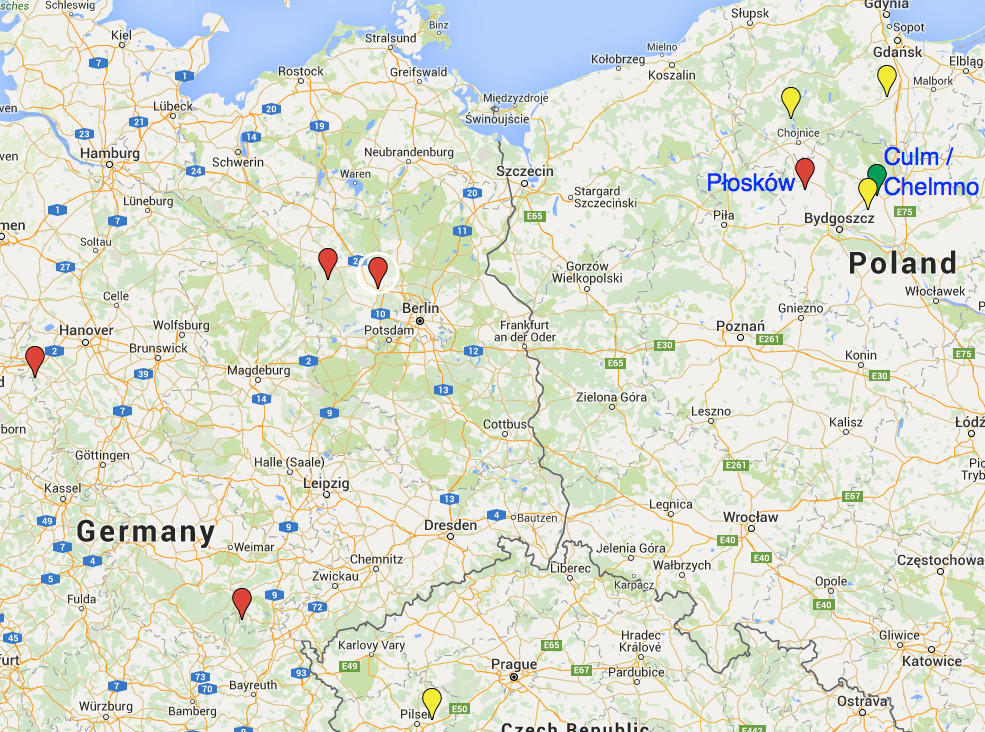 I understand its location might be in a Map Guide to German Parish Registers Vol. 45 – West Prussia II but I do not have access to it via the local library or inter-library loan to investigate.

So the root of my question is where exactly is/was the Friedrichsbruch, Culm, Kokotzko in West Prussia?

Checking with Google Maps shows it's a bit over 7km from Kokocko (formerly Kokotzko), an absolutely feasible distance for the christening of a newborn. In fact, according to the source above, the Protestant church for Friedrichsbruch / Bruki Unisławskie was Kokotzko / Kokocko.

Here is a bit of supplemental historical information about the town from the Słownik geograficzny Królestwa Polskiego i innych krajów słowiańskich (The Geographical Dictionary of the Kingdom of Poland and other Slavic Countries) :

In the 19th century, its Polish name was Frydrychowo (basically the Polish translation of Friedrichsbruch), although it was also known as Bruki. It was a village in the Powiat of Chełmno on the right bank of the Vistula, off the beaten path between Chełmno and Ostromecko. It occupied an area of 2957 mórg (about 1700 hectares), had 171 buildings and 136 homes. There are 62 Catholics and 761 Evangelicals. The Catholic church and the post office was in Unisław and there was a school in the villiage. In 1865, the net income of the town was 1130 talars.

Not the answer you're looking for? Browse other questions tagged 19th-century poland prussia or ask your own question.

3
Finding online parish records for churches in Werdau, Saxony, Germany
6
Learning German scripts (handwriting and printing) used in 19th century records
6
How are the grandchildren related to the head of household in this census?
9
Finding vital records in Upper Silesia (Prussia/Germany)?
3
Why were there no Polish given names in Polish village (part of Prussia)?
6
Looking for information about Anna Oldag (*10 Oct 1866 in Warmbrunn)
4
Record of US citizen/non-citizen marriage abroad in order for family to travel from Poland to US in 1925