The website The Genealogist has a series of printed books which list landowners by county. Each county book has a heading with the name of the county, followed by the Population in 1871, number of Inhabited Houses, and the Number of Parishes.

The landowner information is laid out in tables with these headers:

I am guessing that the figures for the Population, the number of Inhabited Houses, and the Number of Parishes come from the statistics generated when the 1871 Census record was taken, and that the information in the tables come from rate books such as the ones found in the Plymouth & West Devon Rate Books 1598- 1933 on Find My Past.

What I'd like to know is the provenance of these printed landowner books. I've looked all over The Genealogist and I don't see an answer in their research guides. The sequences for the individual county books don't seem to include any front matter (title pages, publication information, or lists of abbreviations found in the books).

Gross Estimated Rental is expressed in £. s. which seems clear enough (pounds and shillings). The Extent of Land is marked A. R. P. -- is this Acre, Rood, Perch as seen on this Conversion Chart and Calculator? 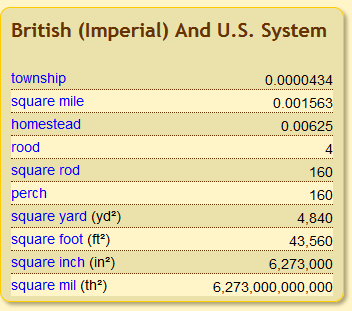 Were these books for England and Wales published by the Office of National Statistics or one of the agencies that came before it? I'd like to know so I can write a proper citation, and be sure I'm reading the entries correctly.

It would also be useful to know which years these books were published, so I could look for copies at other repositories. This is the kind of book which is ridiculously simple to look for if you know the title of the report, but if you don't already know, searching for the likely keywords yields too many results.

Update: according to the featured article at The Genealogist What Land Did My Ancestor Own or Occupy?, speaking about the Tithe apportionment, it says (emphasis mine):

The apportionment gives us the measurement in acres, roods and perches and the value of the tithe payable to the Rector. Infuriatingly, the size of these units of measurement could vary according to the locality that they were applied.

Is this perhaps The Return of Owners of Land, 1873? Can't access my copy at the moment to cross check the contents.

Re the units involved: Anyone attempting to understand these archaic units should be aware that rods and roods are not the same thing. Theoretically roods measure area and rods measure length. See Rood (unit), viz: "Rood is an English unit of area, equal to one quarter of an acre ... A rectangular area with edges of one furlong (i.e. 10 chains, or 40 rods) and one rod respectively, is one rood, as is an area consisting of 40 perches (square rods). ... When referring to areas, rod is often found in old documents and has exactly the same meaning as rood". That last bit is a confusion!

For completeness, see Rod - unit. And while I'm at it, in relation to variation by locality, the equivalent article on the Acre states "An acre was defined in the Middle Ages, being the amount of land that could be ploughed in one day with a yoke of oxen". This practical measurement is suggested to be why the acre is defined as a long and thin area (because that's how fields were ploughed) and also leads to differing sizes of acre - e.g. a Cheshire acre is 10,240 square yards v. the standard acre of 4,840 square yards. Although I am at a loss to explain that away, as I know very well that my home county has a lot of clay soils which would, I imagine, reduce the area that the plough could cover in a day!