Did son-in-law have a different meaning in mid-19th century England?

Most modern dictionaries define family relationships in a narrow sense. So that "son in law" refers to the husband of your daughter. However, I have encountered a very different use in the UK census of 1851.

The 17 year-old son-in-law of Richard Holloway is not the husband of Sarah (or Elizabeth or Mary Anne) but the son of his wife Hannah (father unknown).

I would have expected either stepson or adopted son to be used to describe that relationship. But there is a certain logic to son-in-law, in that a male person not related by birth is being afforded the status of his son. Inheritance might have been a prickly issue but other documents suggest that there would not have been much property to disperse; and Philemon emigrated before Richard's death.

An ngram run on Google Books enables the relative frequency of the use of terms in published texts to be plotted through time. Although that tells us nothing about the meaning with which each is being used. 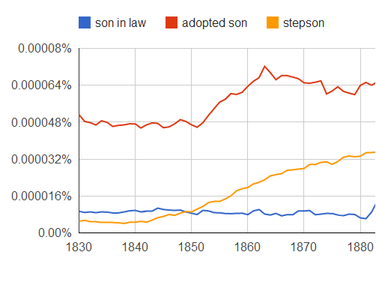 It is possible that this Census return was simply an isolated instance of the misuse of a term by an individual (either accidental or deliberate, to deflect attention from Philemon's illegitimacy) or it might reflect the more widespread use of a different meaning at that time.

It would be interesting to analyse a sample of documents from the 1851 census for similar cases, but evidence to confirm which meaning was meant would not be readily available. Are there other instances from this timeframe where relationship terms have been used in surprising ways?

Answer by Rob Hoare has provided confirmation that my interpretation is supported by others. Can anyone cite other examples that demonstrate this?

The term "son-in-law" to mean stepson was quite widespread in the 19th Century.

I've come across it on many census entries, although stepson is the more common useage later in the century (or just plain "son", even if they have a different surname).

In the censuses the term 'in-law' meant 'related by marriage' as it does today, however the key difference is that in the 19th century it was applied to children which is not the case now. A son whose mother re-marries would today be called a 'step-son', however he may be recorded on the census as 'son-in-law'.

Also in the US, from the Connecticut State Library:

Census indexes can be used to search for examples of this usage. On FindMyPast.co.uk, using the advanced search for the 1851 census, enter a last name, select son-in-law in relationship to head of household, and sort by age (youngest first).

If the surname is very common you may need to filter by county to avoid the search timing out.

Results are like this (name, birthyear, age, gender, birthplace):

Lots of young son-in-laws! Drilling down to the details you'll find most are not married. Following the wife back the children will usually have the surname of her first husband (or her maiden name, if she was not married when they were born). Daughters in Law are exactly the same.

Unfortunately the terms and conditions of Findmypast.co.uk don't allow me to reproduce any part their transcripts or images here, so I switched to Ancestry for the household containing the George Smith above:

In that family, it appears both the son-in-law and daughter-in-law are earlier children (and unmarried).

It would be interesting to see how many son-in-laws there are (under say 16 years old) in each of the censuses, but the search on Findmypast.co.uk isn't flexible enough for that (requires a last name or place, times out with too many results).

It's clear though that in 1851 it wasn't rare for son-in-law to be used as a term for stepson. There are 23 son-in-laws aged under 16 with a surname of "Smith" in Middlesex alone in 1851, compared to only 9 step-sons.

My understanding is that the term son, in law was to show that, insofar as it mattered legally, the son-of-the-wife had been truely recognised as his own son.

This was particularly relevant for (eg) inheritance purposes.

I suspect this is also related to the father-of-the-bride cliche: I'm not losing a daughter, but gaining a son - a seal of approval on the union.

I do find it typical and see the term used a lot, Where the children are from a previous marriage. Just today I received a Will in which a father John Clempson, puts his trust in his daughter Elizabeth to care for his Mother in law Mary Clempson.. 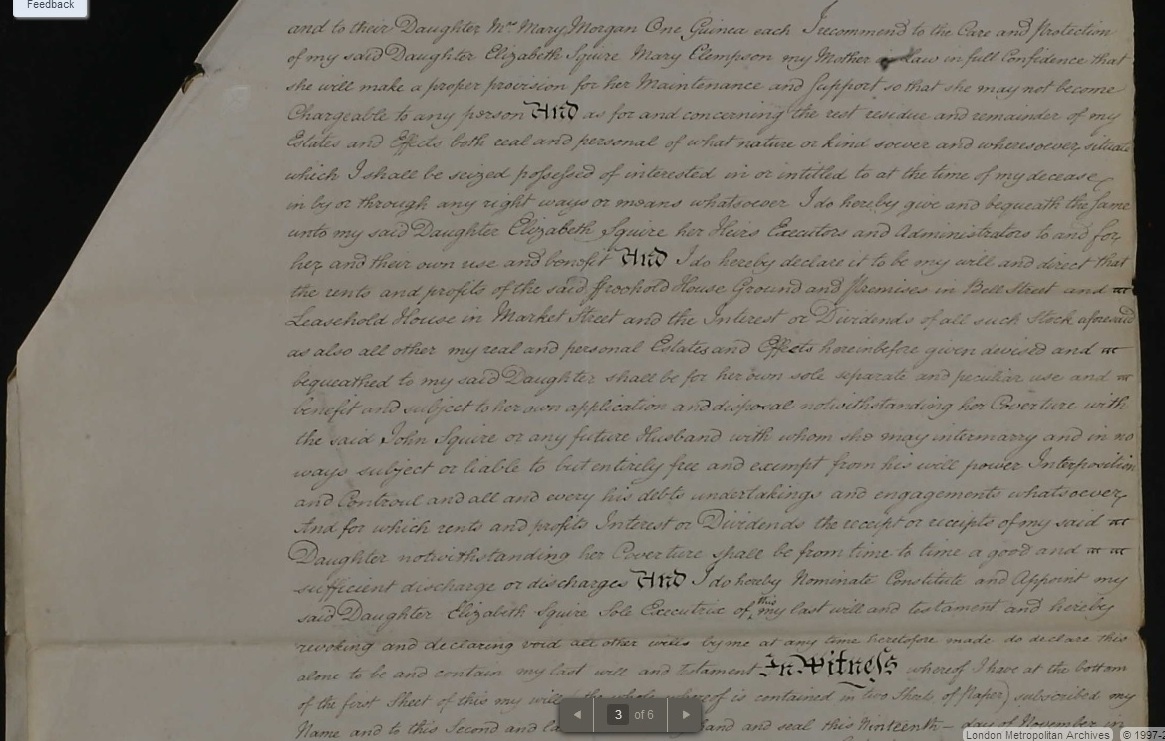 The Quaker records for Nailsworth, Gloucestershire record the death in 1728 of John White, son-in-law of Charles Fowler of Woodchester and son of Elizabeth Fowler his wife. The poor lad was only 10 when he died. He was plainly what we today would call the stepson of Charles Fowler.

According to the OED (Oxford English Dictionary), son-in-law also meant stepson as late as the 1730s. Consider that the OED usage patterns are estimates based on printed, often mainstream sources. I've found that in specialized contexts, usage can sometimes continue beyond what the OED reports. I would suspect that son-in-law may be used here simply in that older (now-obsolete) sense.

Not the answer you're looking for? Browse other questions tagged 19th-century england naming or ask your own question.

8
How can I assess the statistical probability that an individual is the one I seek?
10
Did 19th century English women sometimes change the first name they used?
2
Meaning of "brought from" on early 19th century London burial record?
5
Finding records from the 'manor house'
3
Dating and identifying Penzance photos – are they of George and Fanny Wills?
5
Where to find Will of Giles Chichester from 1820s, probably in Somerset or Guyana?
10
Who are the parents of George Juden?
2
Finding birth family of Betsey Richmond who married in mid 19th century Liverpool?
2
Did Richard Hill and Blanche Todd live in India in the late 19th Century?
7
Formulating a strategy to locate a marriage