Why might Illogan and Gwythian parishioners marry in 1749 at Phillack, Cornwall?

The Cornwall OPC currently has this as record 388277 in the Marriages database:

and the record is also found at FamilySearch.org:

Phillack is not far from Gwythian but it is further from Illogan. 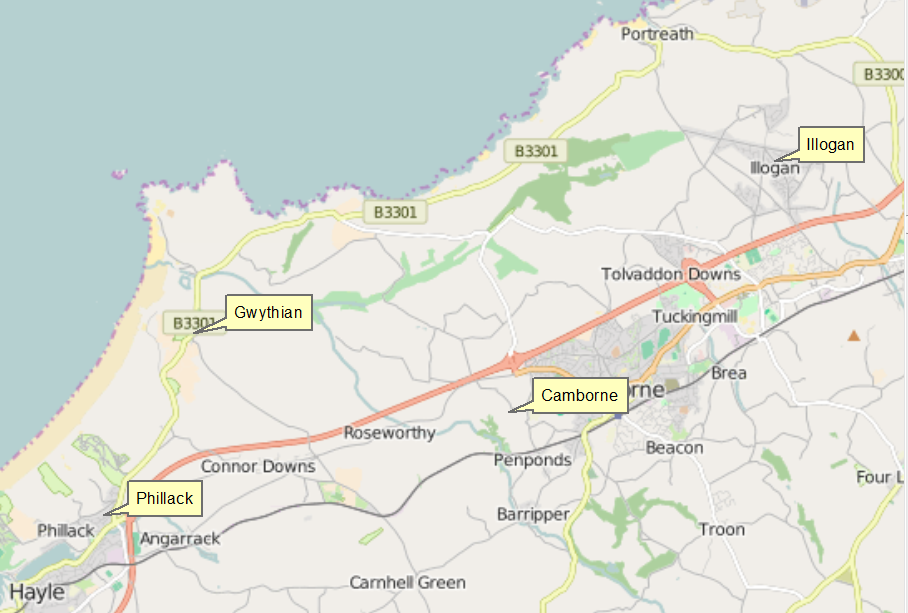 Is there any obvious explanation for why William and Elizabeth might have chosen Phillack for their marriage, rather than one or other of their own parishes?

Many of the Angoves, including Abel (my 4th great grandfather), were Miners, so I suspect, but have no evidence, that William may have been a Miner.

Rebecca Probert in Marriage Law for Genealogists give a number of reasons why a couple might have married in another parish. Including:

It's worth looking at baptism marriage and burial entries in the PR both where they married and where they lived, to see if there's a pattern that helps work out what's going on, plus investigating the history of the relevant churches.

Just as interest, I have a will for a John Richards 1750 who owned Sithney Manor and Abel Angove was a witness who went to great lengths to point out they knew each other, knew his handwriting and was with the Holy Evangelists. Wasn't that Wesleyism?May there not have been some religious disparity between the two? And what year was John Wesley at Hayle? I gather he nearly drowned himself getting over to Dynamite Quay. I know the feeling! Phillack Church is above that area and next to the Bucket of Blood pub.They could easily get from Portreath to Hayle in a boat if they had to or walk along the coast, I've managed it and I'm 70. They may not have liked Robert Newcombe who was the vicar there.Her father may have been tinning at Hayle.

Following the advice of @ColeValleyGirl in an earlier answer I now think I may know what transpired.

The only Angove baptism in the 18th century at Gwithian was, from the Cornwall OPC record 1358612 in the Baptisms database:

This occurred under the Julian calendar so it was 4 months after the marriage of William and Elizabeth, and was in William's parish so it looks like a pregnancy may have necessitated a quick marriage in a nearby parish.

At the time Gwythian marriages were very rare:

I suspect that they chose to marry in the nearby Phillack parish rather than travel further to Elizabeth's parish of Illogan for both expediency and privacy.

Curiously, only one other Angove marriage occurred at Phillack between 1700 and 1750:

William and Elizabeth named their sons William, William, John, John, Abel and Thomas, in that order. I have not yet found a solid explanation for why they may have named a son Abel after a wealthy namesake, who does not appear to be closely related, other than perhaps for luck.

There were some other Hocking marriages at Phillack between 1700 and 1750:

Unfortunately, I have not yet identified the parents or siblings of Elizabeth. She and William named their daughters Elizabeth and Mary, in that order.

Not the answer you're looking for? Browse other questions tagged england marriage-records cornwall 1740s or ask your own question.

5
Could photo be Edward Nettell (1812-1879) and Maria Hocking (1811-1902) of Illogan, Cornwall?
5
Why might name Ferdinando be found in early 17th century Cornwall baptisms?
3
Why would Consent of Parents be needed for 1815 marriage between 26 and 33 year olds in Menheniot, Cornwall?
3
When might this photograph have been taken and why?
2
Why might someone be listed amongst "Additional Individuals Bounded" in 1806 Cornwall Bastardy Papers?