Confirming if relative received medal in WW1 before death

I have this medal record (I blurred some of it) for Sidney Truckle: 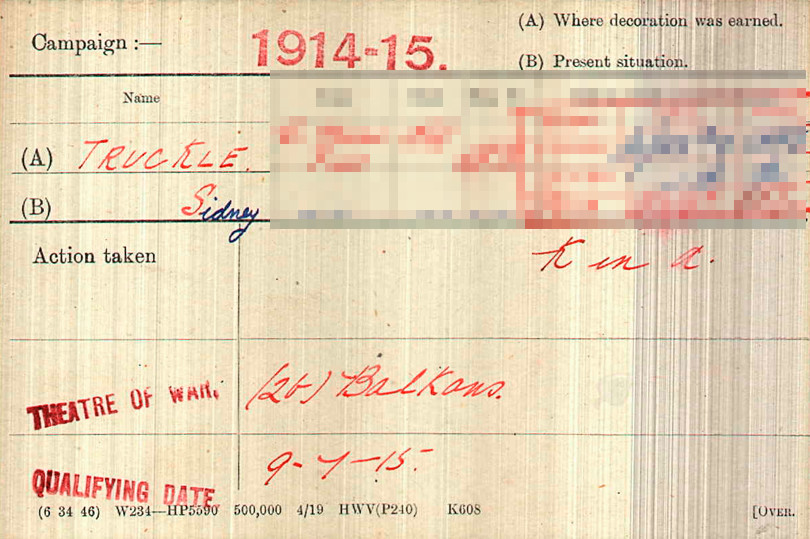 We know that Sidney died on 15th August 1915 in Gallipoli, Canakkale, Turkey.

On this "Medal" card it states that he was "Killed in action". Yet the qualifying date is 9th July 1915.

I then looked at this Regiment or Corps when Decoration was earned document (names blurred):

I am trying to build a picture here. Did Sidney actually receive his medal, or did it never happen and it was granted him after his death? I am not sure exactly what this information is telling me.

You've blurred out the details of what medal it was but looking on Ancestry I can see that it appears to be the 1914–15 Star which was awarded to anybody that served in any theatre between 5 August 1914 and 31 December 1915 who hadn't received the 1914 Star.

It wasn't actually instituted until December 1918 though so it wouldn't have been awarded in his lifetime.

It would have been awarded alongside the British War Medal and the Victory Medal which are also listed on the medal card.

Re the dates - according to the Long Long Trail website, the 6th and 7th Royal Munster Fusiliers (see RMF in Long, Long Trail) have the same history around Gallipoli, viz:

So the qualifying date had been entered as embarkation at Liverpool, to start with. If you look at the Medal Roll, the required, correct date is the date of DIS-embarkation ie, the date of landing at Suvla Bay. Hence the correction, I guess. So, a slight clerical error in the regimental office.

Not the answer you're looking for? Browse other questions tagged world-war-1 or ask your own question.