What parish records are likely for pregnant widow with 8 children in 1791 at Whitchurch, Devon, England?

On 16 Jun 1791, the Bath Chronicle and Weekly Gazette reported on the inquest. 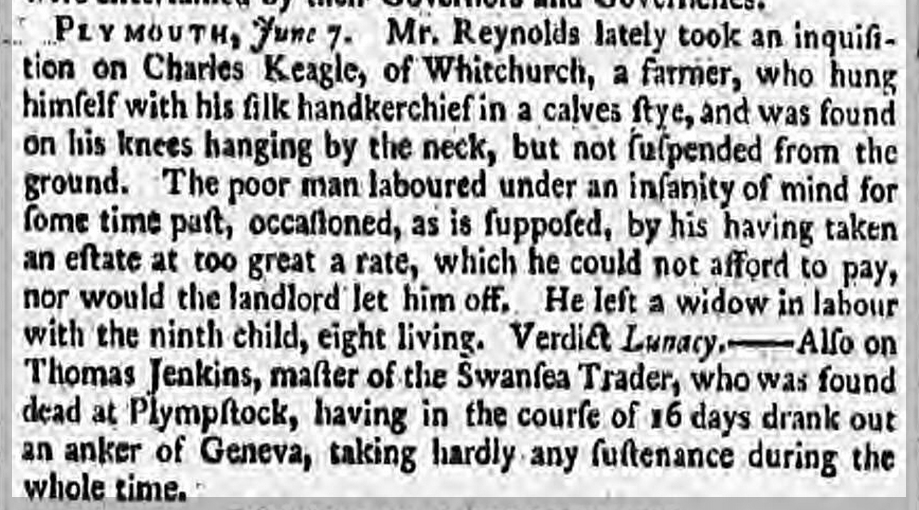 I have located baptisms for his eight children who were living at the time. However, I have not been able to find one for the ninth child who was expected to be born soon thereafter, nor any record of his wife Margery (nee Scoble; baptised 21 Oct 1754 at Sampford Spiney, Devon; married 3 Apr 1774 at Buckland Monachorum, Devon) after the event.

Presumably, the remaining family of 9-10 would have been in need of parish support after such an event. What type of records should I be looking for?

So far I have looked, but not found anything that looks likely, at:

One daughter, my 4th great grandmother, Patience Keagle (1777-1807) married John Foot on 1 Jul 1797 at Whitchurch, so I am assuming that the family remained in that parish. I have not yet located marriages for two other daughters: Elizabeth (1780) and Margery (1785).

While the amount and usefulness of available information will vary by parish, for many parishes there are records like overseers' accounts and poor rate books. Overseers' accounts often include information such as money paid to paupers, and may name the individuals. Poor rate books include information about who paid the poor rate. To see what is available for Whitchurch parish, I would look at the catalogue for the relevant archives, in this case Plymouth and West Devon Record Office. For Whitchurch, I would advise investigating reference 796/26, titled "Whitchurch Parish, Churchwardens' Accounts," which will likely contain information about parish paupers.

Also keep in mind that Workhouses were also in existence since the mid-eighteenth century. Whitchurch was later (1836) in Tavistock Poor Law Union, but there had been a workhouse there since about 1741, as described here. Again, records for the workhouse are likely housed in the local record office, therefore a search of the Plymouth Record Office catalogue is required to determine what records, if any, exist for the period of interest.

Finally, in your case in particular, it may be worth considering that Charles Keagle's widow may not have been as destitute as implied in the newspaper article. I would also explore records other than poor relief records, such as tax records, to see if there are further mentions of the family. For example, I note that in 1798 there was a "Mrs. Keagle" in Whitchurch assessed for the Land Tax. This may or may not be your ancestor, but if it was then she was still renting and occupying land some seven years after Charles's death. These tax records may be found on Ancestry.co.uk.

Here are some resources to supplement the previous answer.

If you would like to widen your search for the family, the website maps.familysearch.org (note: there is no www at the beginning of the address) has several useful tools to show all parishes in a certain radius, contiguous parishes, etc. This interactive map shows the jurisdictions in Britain as of 1851 The class handout England Maps and Gazetteers has the link to this website and many other useful geographical resources, including A Vision of Britain Through Time.

This class was part of a series of classes on English research that FamilySearch gave in January of 2015. Links to some videos are available on the FamilySearch Wiki, in section 2.2 of the page Family History Library Classes and Webinars, and the handouts are on the page Family History Library Class Handouts under Past Handouts.

The class which is most relevant to this time period is England Parish Chest Records; there is also some good material in the handout for the class English Poor Law Records, which covers the time periods before and after the Poor Law Act of 1834.

The links above are to the handout downloads since FamilySearch is in the middle of changing the software needed to view the software for their classes, and not all the videos are available yet. The course was designed to be taken / viewed in the order below, but the classes stand reasonably well on their own.

The full schedule of this series was:

To view the entire range of FamilySearch courses about the British Isles, see these pages at FamilySearch:

I believe that I may have found a candidate for the unborn child of Charles and Margery. I have not located a baptism record, but in the:

I have not found any Keagle baptisms in 1791 +/-1 year anywhere in Devon. After Charles' suicide I would expect a pregnant Margery to stay within the vicinity of Whitchurch (where she lived in 1791), Sampford Spiney (where she was baptised in 1754) and Buckland Monachorum (where she married in 1774).

I am confident that I have now found a second marriage for Margery.

I am not certain what this means for the discovery by @HarryVervet that "in 1798 there was a "Mrs. Keagle" in Whitchurch assessed for the Land Tax". Some of those records could relate to the newly re-married Margery Atwill who had not yet changed, or who had no need to change, her name on those records. However, I think it is likely that at least some of them belonged to Patience Keagle (nee Abel) who, as a Widow of Buckland Monachorum, left a Will in 1831. Patience (of Petertavy) married Abraham Keagle (of the Parish; who I think was a brother to Charles but I have not found his baptism) at Whitchurch on 17 Jul 1763 and was widowed when Abraham was buried on 5 Aug 1771 at Whitchurch.

I have found no evidence that Margery or any of her children became paupers, and so I can only assume that they were able to recover relatively quickly from what could easily have been desperate financial (let alone emotional) times for them. Margery and Charles named their second daughter (my 4th great grandmother) Patience when she was baptised at Whitchurch in 1777 so it seems likely that they were close to Charles' sister-in-law Patience.

I have not yet followed the advice of @HarryVervet and "examined the Plymouth and West Devon Record Office. For Whitchurch, I would advise investigating reference 796/26, titled "Whitchurch Parish, Churchwardens' Accounts," but I plan to.

In 1798 William Atwill was paying land tax at Whitchurch, Sampford Spiney and Meavy, and after William died in 1834 the Will of William Atwill of Meavy was proven in 1835. When I see this Will, I would not be surprised to see some of Margery's children mentioned.

Between sister-in-law Patience Keagle and future husband William Atwill there seem to have been considerable financial reserves that may have been available to sustain Margery and her nine children who were aged 0-14 when Charles suicided.

Margery and her children were not mentioned in Patience Keagle's will but by then Margery had been married to William for 34 years and Patience had her own children and grandchildren.

Not the answer you're looking for? Browse other questions tagged england 18th-century devon poor-law-records or ask your own question.

4
Parish registers for Belper, Derbyshire, England
7
Finding Devon parish marriage records?
5
What might "biblical" names for Abel/Foot and Noake children in 17-18th Century Devon indicate?
4
Why use name Ebzeebra for Ebbot Millman (nee Martin) on 1840 gravestone at Marystow, Devon, England?
8
Finding baptism record near Marystow, Devon, for Harriet Palmer in about 1770?
3
Finding church / parish records for Kent?
5
Separating families with identical parents' names in the same parish in Norfolk, England from 1730-1760?
4
Deciphering place name in 1841 Census for Tavistock, Devon, England?
9
Which British Army regiment did Thomas Stretch join as a drummer boy in 1774?
1
Could Francis Tolvert Greenway baptised 1774 at Falmouth be Francis Green who married Grace Woodley 1798 at Totnes?