Why doesn't the haplogroup K2b2 appear on MitoSearch.org?

I have a mtDNA test for my mom at FamilyTreeDNA.com and the results list her Haplogroup as being K2b2, however, when I go to publish a http://www.mitosearch.org/ entry, the available Haplogroup does not list K2b2, the closest entry in the popup menu is just K2. Given that Mito Search is a service of Family Tree DNA, I'm confused.

Am I reading my results incorrectly? What should I select for Haplogroup on Mito Search? Why doesn't my Haplogroup show up in the list?

The thing to realize is that DNA science is new and quickly evolving as more people test and the science gets better and more granular.

As such it was identified a couple years ago that Haplogroups need to be fairly often revised as new discoveries are made. The last major update was in 2014, and K2B2 used to generically just be K-M526.

Although K-M526 was previously characterized by a single polytomy of eight major branches, the phylogenetic structure of haplogroup K-M526 is now resolved into four major subclades (K2a–d). The largest of these subclades, K2b, is divided into two clusters: K2b1 and K2b2. K2b1 combines the previously known haplogroups M, S, K-P60 and K-P79, whereas K2b2 comprises haplogroups P and its subhaplogroups Q and R.

I have the same issue on YSEARCH which just has the top level Haplogroup and not the more granular one, that is it doesn't define my very specific CTS Haplogroup or even a couple levels above it and I have to use the generic R-M269, the reason I mention this also is that ISSOG's site shows the Y Haplogroup Tree is revised YEARLY.

I know the mtDNA Haplogroup tree was revised in at least 2009 and 2014, but possibly other years as well.

So until Mitosearch.org updates the available choices use the most granular available, so in your case as of 06/25/2015 use "K2" not just "K". 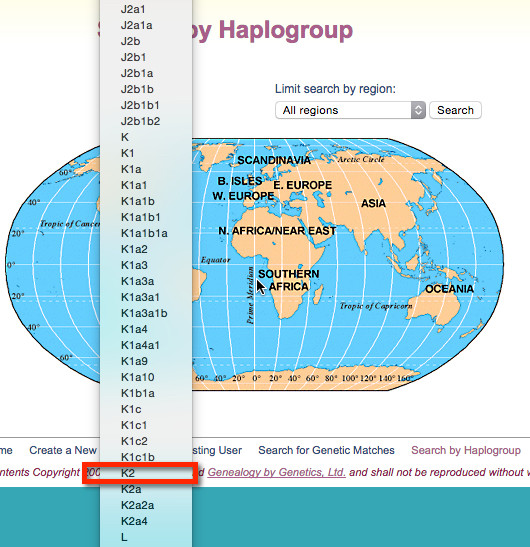 Not the answer you're looking for? Browse other questions tagged dna sharing haplogroup mitochondrial-dna or ask your own question.

7
Finding haplogroup through raw DNA data?
2
Forensic Y-STR DNA test provider that can provide results at greater than a Y-37?
2
ISOGG Y-DNA Haplogroup Tree download
4
Which Golden Thread Matrilineal "Clan" maps to my mtDNA haplogroup?
1
Understanding Identical mt and Y Haplogroup with adopted man my parents age?
2
Does my mother need an mtDNA test?
4
Explaining paternal haplogroup of J2a1b1 for Chinese person?
10
How to narrow down the best DNA donors in a large family?
2
haplogroup diversity in the context of genetic diversity